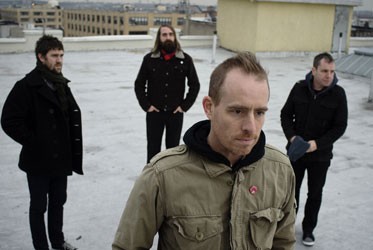 After more than a decade together, Ted Leo and the Pharmacists stand among the elder statesmen of underground rock music. For his part, Leo, 39, has been challenging audiences for twice that long, most notably with his mid-1990s punk band Chisel. Earlier this year, TL/Rx released their sixth full-length album — and first for iconic indie label Matador — The Brutalist Bricks. The record finds the always provocative and ever-outspoken Leo in fine form, delivering singularly raucous riffs and familiarly lean melodies. And, of course, pushing our collective buttons like no one else, a skill he has since transferred to an entertaining blog and a prolific Twitter feed.

Seven Days recently caught up with Leo by phone from his home in Rhode Island, in advance of his upcoming performance at Higher Ground.

SEVEN DAYS: You have a pretty amusing post on your blog abut lazy journalists referring to the Pharmacists as a “pickup band.” Did that stem from a specific incident?

TED LEO: Yeah, it definitely did. There is just this lazy journalistic thing — present company excluded, I’m sure — where they’ll read something that’s written once and it just gets parroted ad infinitum until it becomes the official narrative. Anyway, I wrote that a couple months ago on the road after doing some press and so many people would be like, “So … you’re just a pickup band, you’re just playing with whoever you can get.” And it’s, like, “What?” It doesn’t take more than 30 seconds to figure out that, at least as far as our drummer, Chris [Wilson], is concerned, we’ve been playing together for 10 years. Really, the most minimal amount of research into the person you’re calling to talk to could have given you enough information to form a different conclusion about the makeup of the band.

SD: Well, I’m afraid we’re a lazy bunch. But, obviously, you have been working with the same core of people for a while now. What does it mean to you to be able to do that, and also to have [guitarist] James Canty back for the new record?

TL: It’s meant different things at different times. The first two records I did with Lookout! [Records], The Tyranny of Distance and Hearts of Oak, have this looser vibe. It’s, like, write songs and get together with some people to play them. And they have their charm. But you can see pretty quickly in the next few records how the songwriting itself became tighter. And when I began engaging with my own songwriting, at a certain point I began to know who was going to be playing with me, and I would write with them in mind.

SD: You finished The Brutalist Bricks before signing to Matador. Was it liberating to work on the record without deadline pressure?

TL: Without a doubt. It all came together pretty quickly. But, going into it kind of off the cuff and not really having a plan, did bring a certain…

TL: Maybe. It just felt a little freer. Everything we did felt a little freer. I mean, it’s not like there are these crazy, psyched-out jams. It still sounds like one of our records. And in mixing, we definitely took the X-ACTO knife and cut away more than we felt we needed to add. But again, we had the time to [vet] a lot of our ideas, some of which stuck and some of which didn’t.

SD: Bricks has frequently been called a “return to form.” I find that funny, because it implies that you lost your form, which I don’t think you did. Lazy journalists strike again?

TL: That’s another thing I’ve been biting my tongue on writing one of those “Hey, journalists” posts. At a certain point, my previous record [Rapid Response] was labeled as being this sprawling mess. I utterly reject that, and it actually makes me angry, to tell you the truth. It’s a double album. It’s supposed to be long. It’s supposed to be sprawling. That was the idea. But that’s become another one of those narratives where people are, like, “Oh, yeah, well, that record was a disappointment.” And it doesn’t get a fair shake.

SD: Well, the songwriting on Bricks does seem more focused.

TL: The thing is, I feel like I actually applied less focus. I tend to spend a lot of time making sure that, at least for me, I’m crafting every bit of meaning and meta-meaning and sub-meaning into every line of every song. But I didn’t really worry about that as much on this record. I tried not to overwrite or overthink things.

“Where Was My Brain” is a good example of that, both lyrically and musically. It’s not that it’s not saying anything serious. But the whole thing is pretty humorous, including the music. The music is kind of an inside joke, because it’s maybe the simplest song I’ve ever written, and kind of purposely. It’s, like, hey, we all like punk rock. So why mess with it? I kinda like it the way it is, and garage bands get away with it. Let’s do it.

SD: Those lyrics feel that way, too, kind of intentionally ragged.

TL: I threw these kind of humorous lyrics about serious things down. And in the past I would have tried to tweak them into something that was just packed and dense. But I felt more confident leaving them as they were and walking away.

SD: Do you think that’s a product of being a bonafide grown-up, of being comfortable in your own skin?

TL: I think that’s a good way to put it. I also just got sick of feeling this desperate burden to shout out into the wilderness. And I wanted to allow myself to just enjoy the process a little bit.

SD: Social consciousness, and social commentary, have always been keys in your writing. As you’ve gotten older, have you found yourself any more or less certain of your ideals?

TL: Oh, more. But I have this parallel progression going on within myself [in which] I do become more convinced of a lot of things that I’ve believed in for a long time. But I’ve also become more open to, well, being wrong than I ever have been.

SD: I wouldn’t have expected you to say that.

TL: Well, there are certain core values that I developed at who-knows-what age that still remain pretty strong motivators within me. But in day-to-day interactions with people, I’ve actually grown to be a little less strident and more Zen about rolling with things, and accepting that the particular narrative I bring to the table isn’t always the whole truth.

Catch Ted Leo and the Pharmacists at the Higher Ground Ballroom this Sunday, June 20, with Screaming Females and Pretty & Nice, 9 p.m. $13/15. AA