'The Office! A Musical Parody' Writers on Lampooning Their Favorite TV Show 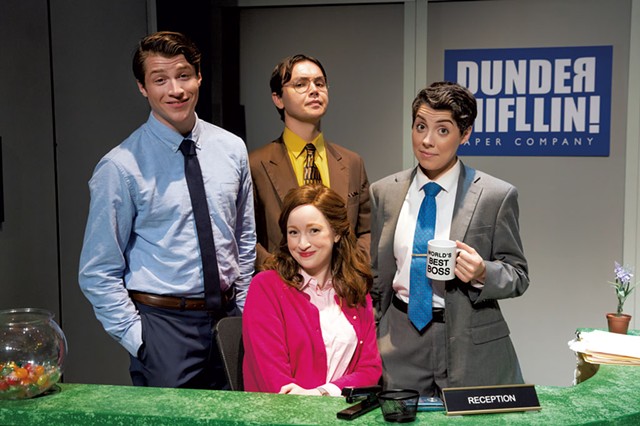 Over its nine seasons, NBC television series "The Office" followed the exploits of the employees of Dunder Mifflin, a fictional paper company in Scranton, Pa. The show perfected the mockumentary format, telling hilarious and painfully relatable stories of ambition, attraction, perseverance and friendship. The ensemble sitcom gets the spoof treatment in The Office! A Musical Parody, which arrives on Friday, October 11, at the Flynn MainStage in Burlington.

The musical is the brainchild of writers Bob and Tobly McSmith. Longtime friends and creative partners, the pair's shared surname is fictitious — it represents their close bond, not a familial relation. The New York City writing team has made an off-Broadway career lampooning pop-culture classics such as "Friends," "Saved by the Bell" and Showgirls. Their next production is an irreverent send-up of the Christmas-centered romantic comedy Love, Actually, soon to hit the Jerry Orbach Theater at the Theater Center in New York City.

Through a fast-paced reimagining of the original series, plus a selection of quirky original songs, The Office! A Musical Parody reminds fans of what they love about the TV show, and it illuminates some new angles. Seven Days caught up with McSmith and McSmith by phone to talk about the art of writing parodies, condensing a TV series into a musical, and why they cast the TV show's central character, Michael Scott, with a female actor.

SEVEN DAYS: Why parody a show with so many satirical elements to begin with?

TOBLY MCSMITH: This is our seventh musical parody. We started with "Saved by the Bell." We love parodying and lovingly lampooning the shows that we grew up with and love, like "The Office." It took us until the seventh musical to feel like we'd be ready to even get to "The Office," because we love it so much.

You're right: It's funny on its own. But there are some elements to look at. There are some problems with it, but it is such an amazing show.

BOB MCSMITH: "Friends" was another challenge, as well. These are shows that are universally beloved but that might not hold up under modern scrutiny. That's where we like to have fun. Through the lens of reality, this doesn't make sense. All of these people would've been fired a long time ago.

SD: What makes something rife for parody?

BM: Every parody we've done has been personal. Tobly and I grew up on comedy and TV. We didn't have a lot of other friends.

BM: It really just comes from a deep place of love for what we choose.

SD: In your show, the character Michael Scott is played by a woman. Why did you make that choice?

BM: Looking at a lot of what Michael says now, it would be very problematic coming out of a man. We kind of knew casting a woman would be a great way to flip it on its head. Emma Brock really does portray Michael Scott. And it's not, like, a Michelle Scott. It really is Michael Scott.

TM: They weren't able to successfully replace Michael Scott after he left the show, right? That's one layer of parody that we add in. Things Michael Scott said were so completely inappropriate, especially to women, and especially by today's standards. In our show, you see a woman playing a man. This is how we're showing you that it was inappropriate, in a hilarious way.

SD: That's interesting. I think that the subtlety of the original is that we know Michael Scott is terrible because of the way the people around him react. But I don't know if that kind of nuance plays as well today.

TM: It's interesting to think of it that way.

SD: Like, he says something terrible, and we see Pam cringe.

BM: Right, and Creed gives a thumbs-up in the background.

SD: How many specific episodes are referenced?

BM: Pretty much all of them. Well, every major episode. I would say over 100 episodes are referenced.

BM: There are little moments, even in the background, that are referencing episodes. It's got that Airplane!-style humor.

SD: How do you construct a cohesive narrative by pulling moments out of an episodic series?

TM: What we look at are the important arcs: the love between Pam and Jim, and Michael Scott's arc of finding his wife. We take these arcs and combine them with a bunch of elements of the show and throw in our own humor and write about 25 songs. And that's how we make a musical.

BM: At the end of the day, these are all human stories. It's about love and friendship, and I think that's something we all relate to.

SD: Do you have clearly defined roles within your writing partnership?

TM: I'm the yeller. Bob is the crier.

TM: We write in one of our living rooms. We have different senses of humor, so it really has to work for both of us for it to get onto the page. It's tough. It's not a "yes, and..." improv comedy situation; it's a "no, and..." situation.

BM: It's "no, never" a lot of the time. But our goal sitting in a room is just to make each other laugh. If something makes us both laugh, which is tough, that's what's going on the page.

SD: Are the songs deeply contextual, or can they lift out?

TM: Both. Some do the storytelling, and some are just really fun. Meredith sings a song called "I'm Nasty."

BM: That could be a radio single.

TM: It's a summer banger.

SD: Have any of the real crew from "The Office" ever contacted you?

TM: Many of the actors have talked about it on social media. Jenna Fischer and Angela Kinsey have mentioned it several times. We're hoping they're going to come see it eventually.

SD: Who's your favorite character?

TM: Michael Scott. I just understand him. I say things wrong. I worked in an office for 16 years, and he's the closest to who I am.

BM: Nate. He gets the best lines. They're always out of left field. That's exactly what my sense of humor is. But also I really relate to Creed. I would be the weird guy in the background making mung beans in my desk, staring off into space.

SD: I think mine is Andy.

SD: I love his evolution. He would've won the Changed the Most Since Freshman Year award. And I've found myself experiencing some anger-control issues in the past.

BM: Who hasn't put a fist through a wall before?

The original print version of this article was headlined "That's What They Said | The Office! A Musical Parody writers on lampooning their favorite TV show"