On a bright Sunday in July, between bites of brunch, a few dozen passengers savored the sights from the Northern Star. Cruising on Lake Memphremagog, which straddles the U.S./Québec border, they floated past Black Island, where smugglers hid booze during Prohibition; Prouty Beach, a favorite local fishing spot; and Eagle Point Wildlife Management Area, which manages nearly a mile of lakeshore habitat.

After years of inactivity, the 65-foot Northern Star is up and running in the Northeast Kingdom town of Newport under new ownership and with new programs. It's part of the tourism-driven economy of the picturesque town, population 4,300, nestled on a hill above the lake and its marina.

The boat's former owner, Chris Johansen, began running international cruises in 2012 but decided to sell the boat in 2017 due in part to the economic downturn prompted by the EB-5 scandal: Two businessmen were accused of misusing $200 million raised from 2012 to 2016 through the state EB-5 program, which financed development projects funded by foreign investors hoping to obtain green cards. An entire downtown block, razed to make room for one of the projects, remains undeveloped, and 2,200 promised biotech jobs were never realized.

"We need to stop turning our backs to the lake and start looking towards the lake." Rick Desrochers tweet this

Determined to keep the Northern Star going — given its economic benefits to the town and its potential to support education — local residents created nonprofit Memphremagog Community Maritime and, in 2019, secured a loan from North Country Federal Credit Union to purchase it. This spring, the nonprofit hired Robbie Cannon to captain the boat and, in collaboration with area businesses and organizations, began offering cruises and using the boat as a floating classroom.

"I look at the community as: Let's fix what we can fix, not: Wait for that hole to be filled," said MCM executive director Rick Desrochers. "We need to stop turning our backs to the lake and start looking towards the lake."

The Northern Star was built in 2002 to resemble a 1920s-style steamer and was transported on a flatbed truck from Lake Champlain to Lake Memphremagog in 2012. The ship can carry 49 passengers plus a crew, and its white-and-blue exterior and shiny wooden interior give it a regal air. The first floor has space for dining, and the top deck offers an open view of the lake. Below deck is a cozy bar area, complete with portholes and cocktail tables.

The Northern Star's presence continues a long history of passenger boats on the lake, which harbored paddle steamers from the 1850s through the 1950s. One steamer, Lady of the Lake, could carry 666 passengers; it stopped sailing in 1916 and was sold for scrap metal the following year as World War I raged on.

The Northern Star offers scenic and dinner cruises on Saturdays and brunch cruises on Sundays. Prices range from $14.95 per child age 3 to 11 for scenic cruises (children under 3 are free) to $49.95 per adult (12 and older) for dinner cruises.

It also hosts charter cruises, including Murder Mystery Night, Star Wars Night and Starry Starry Night, a collaboration with St. Johnsbury's Fairbanks Museum & Planetarium. Most charter cruises are $49.95 per person age 13 and up.

Tourists "from all over the country" have been booking most of the themed cruises, Desrochers said, and local businesses have booked private cruises to thank employees for their work during the pandemic.

Seventy community businesses and organizations have partnered with the MCM, Desrochers noted, including 12 local restaurants that cater the onboard meals. The nonprofit donates leftover food from the cruises to the Newport Church of God for community members who are food insecure. 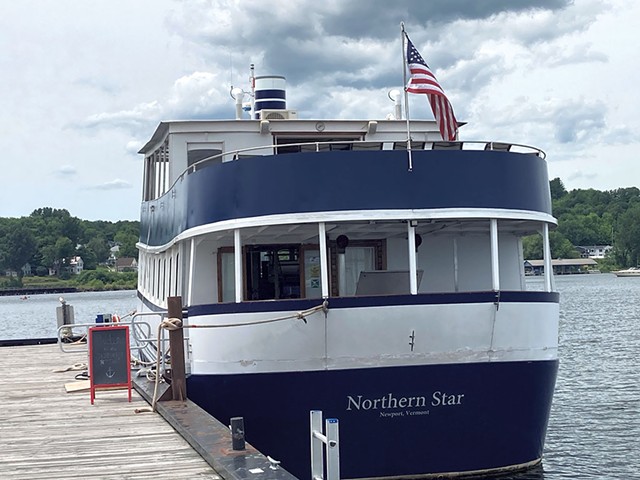 The Northern Star's educational programming serves adults and youth. Numerous local experts offer programs for youth, including one on field science for elementary schoolers and one on the watershed for middle schoolers.

At this year's Town Meeting, Coventry voters agreed to allocate $10,000 to MCM to create a program in the fall to teach K-8 students about the lake, Desrochers said.

On a recent trip to Prouty Beach, instructor Mary Pat Goulding asked a group of Orleans third graders to look for insects and crustaceans that live in the aquatic ecosystem and to measure the turbidity, or haziness, of the lake to assess water quality. The former board president of the Memphremagog Watershed Association, Goulding taught about the role of buffer zones in keeping farm runoff from harming the watershed, and asked what students knew about the lake and whether they live

"Some students knew the lake well and fished with their families," even divulging good fishing spots, Goulding said. "Then you'd have students who'd never even seen the lake. The first response is always about the boat. The boat's pretty impressive, especially if you're a third grader."

The watershed association also provides educational outreach to adults at its annual meetings. Three years ago, it held a panel discussion on PFAs, a family of toxic polyfluoroalkyl chemicals present in Vermont waterways. This year, it plans to educate the public on leachate technology. (Learn more about environmental threats to Lake Memphremagog here.)

Educating and serving the Newport public is a priority for Desrochers. He grew up on a dairy farm in Newport Center and now recounts some of his family history while narrating Northern Star cruises. After living in the South and Midwest, he moved back to Vermont in 2013 to support his aging father and take a job at Burke Mountain Resort.

While in the process of moving, Desrochers received notice that the job had been canceled. "I had a job, but then EB-5 happened," he said.

MCM board member Douglas Coutts said that the scandal and fallout, including the lingering giant hole in downtown Newport, "really dampened the spirit here."

Since then, Coutts said, the area has been economically depressed, a situation exacerbated by the pandemic and the long border closure. Magog, Québec, population 27,000, located opposite Newport, is decidedly more developed and affluent, he noted. "The wealth over there is staggering compared to here; a lot of [Québécois] own cottages here, and they're not able to come," Coutts remarked.

Both towns and Lake Memphremagog sit on Western Abenaki homeland. Native people and the European settlers who displaced them have fished and traded in the area throughout known human history.

Desrochers, who studies the history of the lake and area, said that Newport and Magog have changed greatly over time.

Desrochers believes that the end of the passenger rail in Newport in the 1960s contributed to its economic downturn, while Magog's popularity as a vacation spot increased because of population growth in Montréal and Sherbrooke.

Coutts, who is also a board member for the Memphremagog Watershed Association and Memphremagog Conservation, its larger sister organization on the Québec side, has big hopes for improving the Northern Star and expanding its educational outreach. The MCM board has researched replacing the boat's diesel engine with an electric one, he said, and making the whole boat fully ADA compliant. (Currently, only the first level is wheelchair accessible.)

Coutts also has his eye on the Gateway Center, a city recreation venue on Newport's waterfront next to where the Northern Star docks. He sees potential to turn it into a lake educational center, "our version of the ECHO Leahy Center [for Lake Champlain]," he explained.

The Northern Star crew is unsure how the soon-to-reopen border will affect its programs. Before the border closed, American boaters could sail into Canadian waters (but not dock) without needing passports. Because three-quarters of the lake is on the Canadian side, a reopening would greatly expand their options.

On that fine Sunday on the water, though, Capt. Cannon leisurely skirted the boat around the liquid border and gave a honk to the Canadian border patrol, who waved back from a raft. À bientôt, on espère.