Peter Macfarlane has paddled into a headwind riding four-foot waves on Lake Champlain. He's seen ospreys, eagles and kingfishers while canoeing on the Missisquoi River. And he's eaten pizza in Swanton and dinner at the Inn in Montgomery Center after a day's travel by boat.

These experiences — rigorous paddling, viewing serene scenery, dining at restaurants — all took place during Macfarlane's trip on the Northern Forest Canoe Trail. The 740-mile waterway stretches from Old Forge, N.Y., in the Adirondacks to the St. John River in Fort Kent, Maine, and includes 145.5 miles in Vermont. Macfarlane, a fiddler and canoe maker who lives in Addison, has paddled the full trail twice.

"For a trip of that length, if I had to describe it in one word, I would say it's immersive," the 59-year-old said. "Usual, everyday life fades very much into the background. You become totally immersed in the process of moving through the natural environment."

The Northern Forest Canoe Trail is managed by a nonprofit that's based in Waitsfield, and the waterway passes through four states and Québec. The trail was completed in 2006, half a dozen years after organizers started to work on it, executive director Karrie Thomas said.

"It's a real privilege to be able to use the waterways of Vermont." Karrie Thomas tweet this

The project was spearheaded by Kay Henry, former co-owner of Mad River Canoe, and Rob Center, who was the business' marketing director. The two were inspired by Native Trails, a defunct group that was based in Maine and worked to research and map preindustrial travel routes, Thomas said. For much of its length, the Northern Forest Canoe Trail follows waterways that historically were used by Native American travelers. In mapping the trail, organizers worked with people in local communities through which it passes, Thomas noted.

Paddlers who follow the route will encounter a range of canoeing experiences, including placid rivers, whitewater, glacial lakes and portages. They'll float past farmlands, forests, wetlands and small towns. It's unclear how many people complete the journey each year, Thomas said, because not everyone reports their trip. Ten were known to have paddled the entire 740 miles last year, she said. The journey can take anywhere from three weeks to two months.

"It depends on your boat, the water, and how many days you want to stop and smell the flowers," Thomas said, adding that she is "blown away and in awe" of people who paddle the full distance.

"I tend to go out with the intention of having fun," she said. 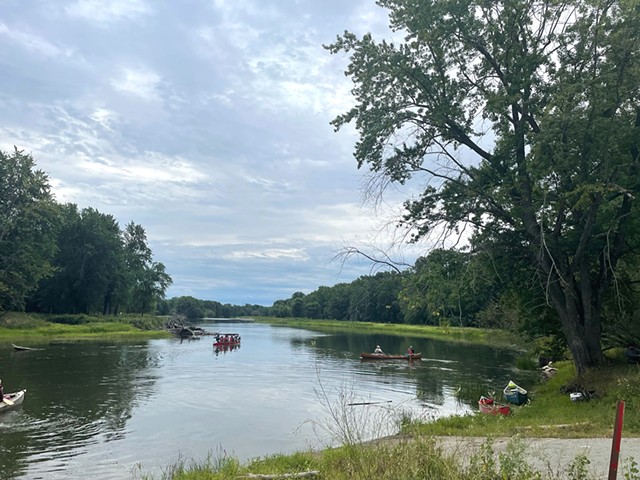 The nonprofit performs a variety of functions in its stewardship and management of the waterway. Its work includes establishing and overseeing campsites along the trail, which are placed every five to 10 miles. The group also constructs and maintains access points to the water and builds relations with landowners whose property is along the trail. The use of this private land builds on the region's tradition of a "wonderful culture of the outdoors," Thomas said.

"It's a real privilege to be able to use the waterways of Vermont, because so much of it is private," she said. "The generosity of these private landowners is what allows us to do that."

In addition to maintaining the trail's infrastructure, the nonprofit organizes canoe-related events and offers trip planning, navigational tools and maps. It recently introduced a GPS-enabled app, in collaboration with adventure guide company FarOut, that "includes over 1,400 waypoints, site photos and several base maps," according to Northern Forest Canoe Trail's website. The app marks campsites, portages, natural attractions and more.

In Vermont, the trail runs from Lake Champlain in the west to the Connecticut River at the New Hampshire border. The in-state waterways are joined by a 28.5-mile dip into Québec. "The trail has an enormous variety of types of water in Vermont," Thomas said — including lakes Champlain and Memphremagog, a stretch of whitewater on the Missisquoi River near Swanton, and the meandering Clyde River, which passes through marshland in the Northeast Kingdom.

Thomas' family has enjoyed a trip that combines paddling on the Missisquoi River with cycling on the Missisquoi Valley Rail Trail, which runs beside the water. The excursion involves first locking your bike along the rail trail, then canoeing to that location and cycling back to your starting point. Missisquoi Paddle-Pedal, an annual event organized by the canoe trail nonprofit, follows a similar route; this summer it will be held on July 16.

Macfarlane, the canoe maker from Addison, has paddled the trail in both directions: steering his cedar-strip boat from the Adirondacks to Maine following the conventional route and "upping the ante" on a more rigorous journey east to west. In this direction, canoeists are faced with substantially more upstream paddling.

Both times, Macfarlane traveled alone and packed light in order to carry his canoe and gear in one haul on portages. He slept in a hammock, ate a lot of rice and beans, and canoed long distances each day.

"It's a beautiful thing," Macfarlane said, "if that's what lights your candle."

Missisquoi National Wildlife Refuge: A wonderful 10-mile loop can be paddled from Louie's Landing via the Missisquoi River, Lake Champlain and Dead Creek. This flatwater route passes the Shad Island heron rookery and allows people to dabble in the bigger waters of Lake Champlain without spending too much time in the broader lake. If you get to open water and the wind is strong, you can turn around and go back the way you came to avoid tangling with potentially dangerous conditions. This section of river holds water all through the summer and can be paddled even when other spots are too low.

Missisquoi Paddle and Pedal: The Missisquoi River parallels the Missisquoi Valley Rail Trail from Richford to Sheldon Springs. This 27-mile stretch can be broken down to a number of day trips that all have an easy bike shuttle, or to a couple of options for overnights. For an easy beginner's overnight, start in Richford and camp at Northern Forest Canoe Trail's Doe Campsite, about five miles down the river. After a leisurely morning, take out a mile downriver at the Route 118 bridge in East Berkshire. If you want to extend this, start about five miles upstream of Richford at Stevens Mills and finish 10 miles downstream at Lawyers Landing, above the dam in Enosburg Falls.

Nulhegan Fen: The Northeast Kingdom's Nulhegan River flows through the Silvio O. Conte National Fish and Wildlife Refuge and the Audubon-designated Nulhegan Basin Important Bird Area. Start at the outflow from Nulhegan Pond, just east of Island Pond, and end at Wenlock Crossing. This eight-mile stretch meanders through boreal forest, bog and fen. An active beaver population makes this section hold water through the year, but you will definitely encounter evidence of their industriousness, which will require stepping out and pulling over dams. In the spring, this is a relatively small effort; later in the season, it can be daunting. Needless to say, the wildlife viewing and solitude are magical. When you are finished, consider refreshment at the Essex House & Tavern in Island Pond!

The original print version of this article was headlined "Paddle Power"