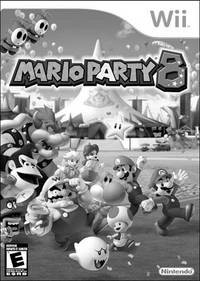 Having reached its eighth incarnation, “Mario Party” has attained the sort of classic status normally reserved for Super Bowls or Harry Potter books. When you do enough of something, you no longer look like a poor copy of the original; instead, you’re contributing to a successful lineage.

Eight years since the original “Mario Party” was released and 6.5 million copies of the series later, the basic premise hasn’t worn thin. In a game that’s sort of an overly complex Candy Land or Chutes and Ladders, spiced up with all sorts of competitive and cooperative mini-games, Mario still knows how to party.

Players select a popular Nintendo character, then roll an on-screen die and move across a crazy 3-D board. Running down stairs is the most obvious goal, while collecting coins, winning mini-games and screwing over your competitors provide the fun.

And that competition has always been the allure of “Mario Party.” When it’s played as a single-player game, the minigames remain routine, the game boards completely baffling and the somewhat random outcome frustrating. But put four players in the room, and the whole mess makes sense. As with any college drinking game you can think of, the real fun of “Mario Party” lies in hanging out, not in trying to accomplish a mindless task like bouncing a quarter into a cup.

For the past seven games, Nintendo has done little with the franchise beyond updating it for its latest home console and throwing in a few extras to make it seem worth buying a sequel. For “MP8,” Mario turns up the volume on his party a little more. Taking advantage of the Wii’s motion controls, the mini-games feel less repetitious than they have in the past. The task of cooperating with a partner to row a boat, with the controller rotating through the air as you attempt to synchronize your strokes, offers the kind of fun the Wii brings to life.

This modicum of novelty, along with some spruced-up graphics, helps steer attention away from the increasingly bizarre nature of the “Party” series and Nintendo games in general. The game looks like the feverish dream Willy Wonka might have after eating a case of chocolate bars and washing them down with a gallon of Mountain Dew. Everything glistens in primary Pixy Stix hues, and the play sports an Alice in Wonderland upside-down logic. The master of ceremonies looks like the Mad Hatter, gleefully jumping into games to update players on rules apparently designed to ensure no one can actually win through strategic play.

And that’s “Mario Party”: less a game than a living-room curio. People don’t ponder “Mario”; they just get together and play.

The easy-to-use Wii controls fit the easy-to-play style of the game, which makes it the perfect party game for all ages.

Some of the mini-games allow players to use their Miis - cartoon characters that you can make on the Wii.