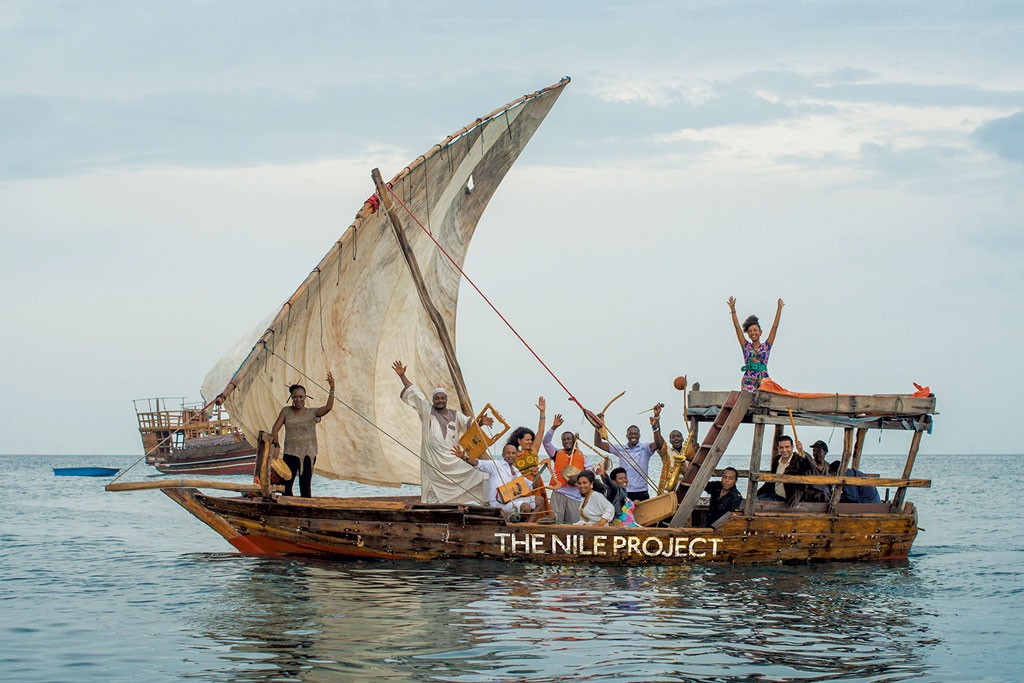 As it courses from Lake Victoria to its sprawling delta at the Mediterranean Sea, the Nile River passes through no fewer than 11 countries. For each, the river is a lifeline. But that lifeline is so fragile that the United Nations has singled out eastern Africa as a region where increasing water scarcity portends dire economic, nutrition and sanitation problems.

The issues pertaining to the world's longest river are enormously complex, and one unusual and ambitious international organization contends that the best way to begin addressing them is through music.

The Nile Project is a multifaceted music and education program that will make three stops in our region within the next month: at Burlington's Flynn Center for the Performing Arts on March 28, at Middlebury College on April 2, and at the Hopkins Center for the Arts at Dartmouth College on April 17. The project includes more than a dozen East African musicians who not only perform in a diverse array of traditions but also teach classes and lead workshops on how to use art to address geopolitical issues.

When the Nile Project visits Burlington, for instance, the main event will be its Saturday evening concert. But the participants will also visit the University of Vermont to present talks called "Civic Engagement and the Management of Water Resources," "The Nile and African Identity" and "The Role of Musicians in Social Movements." Similar activities are planned for the Middlebury and Dartmouth campuses.

Several years in the making, the project is largely the creation of Mina Girgis, an Egyptian ethnomusicologist with a background in cross-cultural music education. Speaking by phone from a bus eastbound on Interstate 80 in Ohio, Girgis tells Seven Days that he was inspired to launch the project by a concert of Ethiopian funk music he attended in San Francisco. He thought the music would be relevant to modern Egyptians, whose country had just undergone the upheaval of the Arab Spring.

"Water conflict isn't really a platform for a dialogue between the people of different [African] countries," says Girgis. "They weren't even in the conversation, even though they share a river that is becoming the subject of the world's major water conflict. I could see how a musical conversation could have an impact on the larger water conversation that needed to happen — starting from a place of cultural empathy and a more systemic view of the Nile."

In 2012, Girgis led a scouting trip to the 11 countries of the Nile Basin, meeting musicians and activists along the way. Since then, the Nile Project has held three enviro-musical residencies — two in Egypt, one in Uganda — and its roster of musicians has grown from 18 to 28. Thirteen of them are on the current tour.

Those musicians perform in traditions that long predate the founding of the countries now engaged in border skirmishes over water rights. Sophie Nzayisenga, for instance, plays the inanga, a Rwandan instrument akin to a zither. Ahmed Said Abuamna, from Sudan, is regarded as a modern-day master of the masankop, a lyre-like instrument with a millennia-long history.

Girgis says the music resulting from this pan-African collaboration transcends its constituent styles. In bringing them all together, the Nile Project "gives a space for a musical diversity onstage that really keeps the show moving and keeps people engaged," he says. Girgis estimates that 95 percent of the music was composed specifically for the project's performances.

It's difficult not to enjoy the lively, exciting music of the Nile Project, but how does that translate into social activism? Girgis considers the project a form of "cultural diplomacy": The music jumpstarts a conversation about the environmental and political issues currently faced by its origin cultures, he says. Entertainment inspires audiences to learn — a process that, ideally, leads in turn to awareness and action.

So far, the Nile Project has launched a fellowship program for university students in Africa and has sponsored the Nile Prize, a competition to develop innovative solutions to the river's most pressing problems. Those include providing irrigation and nutrition to a poor region with one of the highest rates of population growth in the world.

Girgis also hopes to collaborate in the near future with the Smithsonian Folklife Festival. The group's second album of recorded music is in the works, as is a documentary film about the project.

Just as the protean project results from extensive collaboration, so the area venues slated to host the Nile Project jointly applied for the grant to bring it here. Liza Sacheli, director of Middlebury College's Mahaney Center for the Arts, says these events represent the first large-scale collaboration of some of the biggest arts venues in Vermont and New Hampshire.

"Not so very long ago, this might have been seen as competing," Sacheli says, "but recent market research revealed that we're not stealing audiences from each other. There's not a lot of overlap. We may be helping each other, and that opened up new possibilities for us. A healthy arts tide will raise all of our boats."

That cooperative effort echoes the spirit of riparian cultural exchange that is the heart and soul of the Nile Project.

The original print version of this article was headlined "With Music, the Nile Project Delivers a Pan-African Message"