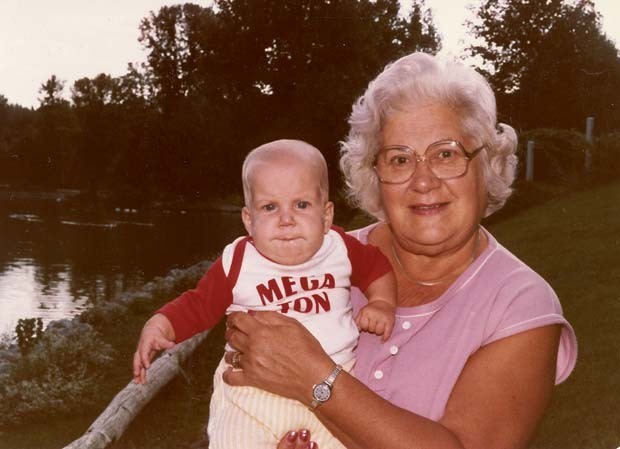 In about two months, my mum and dad will become grandparents. I'm pregnant and due in early May; my brother's wife is due in June. Amid the chaos of preparing for these first grandchildren, my parents have been discussing an important issue: What will they be called?

My dad wants to be Granddad, just like his own father. Mum is torn between Nana and Lulie. The latter was my mother's nickname as a little girl. When her youngest brother tried to say her name, Susan, it came out all wrong. But "Lulie" was adorable, so it stuck.

My mom likes the idea of resurrecting this moniker, but she's also drawn to the name she used for her favorite grandmother, Nana. "I have incredibly warm associations with that name," she told me. Nana taught her to cook and sew, gave her backrubs and always shared her big bed with my mom and her sister when they visited. But the name also conjures images of an austere old lady. "Nana had a big bosom and wore a long house dress with old-lady shoes," my mother recalls.

Maybe she won't have to decide. Grandparents don't always have the final say when it comes to their new names. That privilege often goes to the first grandchild, who inevitably mispronounces them. My maternal grandfather was supposed to be Grampa, but when my brother opened his mouth, out came "Pappy."

My mom suspects something similar might happen with her grandchildren. "Somebody is going to say something cute, and it'll stick," she predicts.

Bumpa, BeeBop Steve, Big Nana, Nama and Dampa — these are just a handful of the idiosyncratic names I've heard friends using to describe their parents' parents. Whatever you call them, grandparents are a special part of growing up. My Nanny played piano and sang with me, and I marveled at my Nanna's hair: white with a blue rinse.

In this month's Kids VT, we salute the grandmas and grandpas, Nonnies and Pawpaws who make kids' lives a little bit sweeter. In "Family Extended", Ken Picard talks to Vermont grandparents who are raising their own grandchildren. And in "Polish Poker Face", Cathy Resmer reminisces about grandparents who lived nearby, but revealed little about themselves.

In "Habitat", we peek inside the room a Ripton grandfather built to house the 800 model trains he has collected — and shared with his 14 grandchildren — over the last five years. And in "Making Memories", Ken Picard offers tips on conducting an interview with Nana and Granddad, so their stories live on long after they're gone.

So grab your grandma — or your Oma or Pops — and enjoy the March issue.