The New Wave of Vermont Hip-Hop 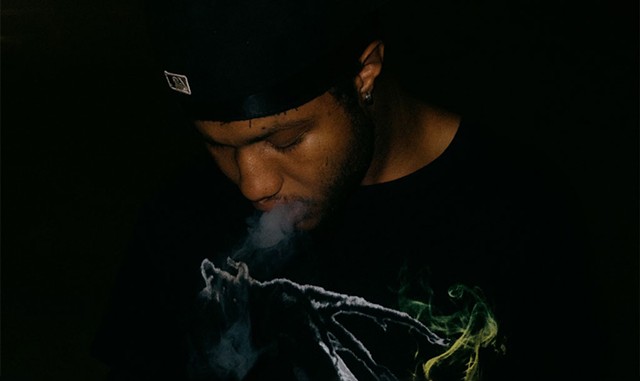 Inspired by the stratospheric success stories of 99 Neighbors and North Ave Jax, the 802 has a record crop of young rappers with big dreams. So this installment of Seven Days' occasional "Quick Hits" feature focuses entirely on Vermont's new wave of hip-hop artists. Read on for six exciting efforts.

Hakim XOXO has been a key player in the same Burlington scene from which North Ave Jax exploded. Alongside prolific MC Real Ricky and genre chameleon KAMi OK!, he's built a dedicated fan base through Soundcloud singles and raucous house party shows. The crew's output is still a work in progress, but its ascension to bigger things feels kind of inevitable. There's just too much momentum.

Hakim XOXO's most recent offering, the four-song EP BABYNEO, is dominated by booming bass and psychedelic production. His subject matter is classic rap braggadocio, and his lyrics are simple and effective. But what really makes the EP work is Hakim XOXO's nonchalant charisma: Dude knows he's got the goods. Once he finds a strong executive producer to focus and hone that talent, he's going to be a real threat.

Key Track: "ASTROBOY" Why: His chemistry with KAMi OK! is always on point, and these two make this glitchy club (shooting) anthem sound like a future classic. Where: Apple Music, Soundcloud, Spotify

Burlington artist Bilé's quality control is impeccable. As Atlanta rapper and philosopher 2 Chainz once observed, "Every song is a single," and Bilé takes that ethos very seriously. Even a boom bap-purist senior citizen like myself had to concede that his 2021 EP INSULT TO INJURY was an unusually professional piece of work in a crowded field. His new album, Kids Need Guidance, cements his place at the forefront.

Heavy on thumping percussion and flamenco guitars, the seven-song set is an impressively consistent listen. No matter the vibe, Bilé takes a calculated approach, finding the perfect angle and making the most of his voice as an instrument. If I had to bet on who will be "getting signed" next here in Vermont? It would be him. The catalog is just too strong.

Key Track: "mad 4 it" Why: A head-banging beat with earthquaking bass lines are 100 percent overshadowed by Bilé's vocals. A master at work. Where: Apple Music, Soundcloud, Spotify

Rapper/producer FOZ. has been a growing force in the Burlington scene over the past year. His easygoing style and bedroom-studio aesthetics are a striking contrast to the precision of his razor-sharp lyricism. His 2021 EP, Stepping Stones, was a too-short blast of raw potential. But his new release, Building Blocks, is a proper debut album.

Much like his frequent collaborator Robscure, who shows up on two tracks here, FOZ. is a precocious talent, wise beyond his years. That is both blessing and curse — and there is still much room for growth — but this is a knockout LP for an artist so young. His reach seldom exceeds his grasp in this album, even as he veers from philosophy to soul-searching to storytelling. As FOZ. continues to sharpen his songwriting — and hone his production chops — he will keep attracting new fans. Like me.

Key Track: "a little more light" Why: Even on a project with some potent guest features, FOZ. carries the album's best cut entirely by himself. Where: Apple Music, Soundcloud, Spotify

SYIERR is one of the most unique artists in Vermont's new wave, crafting claustrophobic soundscapes that refuse to conform to current trends. His latest project, 19, features menacing, bass-heavy production reminiscent of early Tricky or the glory days of London-based Ninja Tune records, which mashed up EDM, reggae and hip-hop.

Yet SYIERR is emphatically a rapper focused on status, power and violence. His delivery is urgent, nearly whispered, and his lyrics are mantra-like, repetitious but powerful. 19 is a raw, fast-moving project, but it will also come to haunt you.

Key Track: "DIFFERENT" Why: It's a woozy, creepy and compelling ride, even at two short minutes. Where: Soundcloud

In addition to sporting one of the most memorable names in years, Moose got tha Juice is also an example of truth in advertising. The kid is absurdly talented, blessed with an elastic vocal range and a gift for innovative earworms. His 2020 EP, System Overload, established him as a visionary artist in his own right. On his latest offering, More Than Moose, he is expanding his style in a dozen directions at once. There are many surprises here but precisely zero failed experiments.

Moose is still repping the Hella Fader crew, and, sure enough, his partners Juni the Wiccan and KISH4WN bring some killer guest features here. But this album is a distinctly solo artistic statement, a testament to his ambition — not to mention his sheer love of music.

Key Track: "M A L I B U" Why: A standout cut on a standout project, and few cosigns carry more weight than Yung Breeze. Where: Apple Music, Soundcloud, Spotify

Finally, this short tour would be incomplete without mentioning University of Vermont dorm cypher champion Cam Barnes, who has been putting in work locally for years now. Early on, that work was very DIY, lo-fi and occasionally clumsy, but his potential was obvious. As Barnes has branched out into the bigger scene and refined his own gifts, he's grown as an artist. No surprise, then, that his latest album is a huge step up.

don't boil the ocean is a remarkably polished piece: laid-back, smoked out and packed with his best verses to date. His writing is leaner than ever, a whirlwind of vivid visuals and sly jokes. That's only half the story, though: He's also an increasingly discerning executive producer. The album unfolds at a leisurely pace, and the tone never wavers. This is art, properly framed, and Barnes clearly has a bright future in the genre.

Key Track: "mantra" Why: Right from the start, Barnes sets the tone and grabs your attention over a beautiful minimalist beat. Where: Soundcloud, Spotify