Side Dishes: Stockbridge gains a bistro 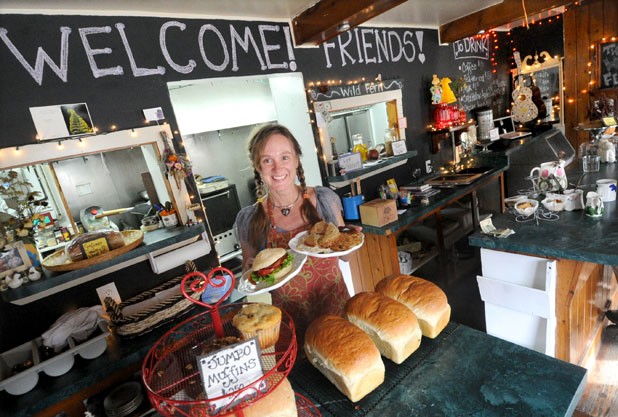 If you’ve ever thought your town could use its own little bistro but didn’t think you could pull off opening one yourself, Heather Lynne might be able to offer advice. Since it opened eight weeks ago, word of mouth has led to steady business for her restaurant, the Wild Fern.

A baker and musician, Lynne had “no money” when the owners of the former Tozier’s Restaurant South offered up their space for lease, she says. Lynne had long believed that tiny, decentralized Stockbridge could use a gathering place. “During Irene, we saw how disconnected our town can be,” she says.

Lynne envisioned an intimate space where she could bake, cook up produce from her neighbors, display art and host performances. The urge to realize her vision became, she says, “overwhelming.”

Undaunted by a lack of funds, Lynne and her partner, Rick Redington — both members of band the Luv — furnished the diner-cum-café with thrift-store and roadside finds and brought in enough food for a first meal. Voilà — Wild Fern was born, named for the couple’s daughter, Zoe Fern.

“I take each day as it comes by going simple,” says Lynne, who offers only a handful of specials based on ingredients she can find fresh that day. In addition to the bagels, croissants and breads that are rote to her, the baker cooks up soups, sandwiches, pizza (on Wednesday and Friday nights) and stromboli, all from produce she gathers from Stockbridge farms.

Lynne bounces around the bistro as Wild Fern’s “cheftress, waitress and baketress,” as she puts it, saying, “I’ve tried to combine the best of three worlds: music, food and art.” During Sunday brunch, she and Redington entertain diners with instruments crafted from cigar boxes.