The New Deal Pops Up With Seitan in Burlington 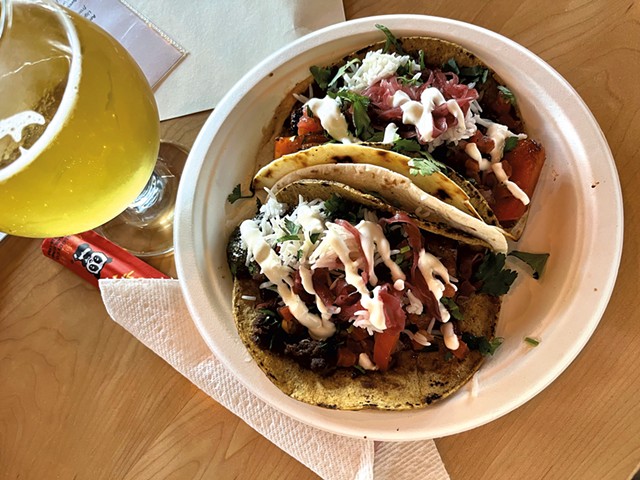 I'm not a regular seitan eater. But when I walked into Simple Roots Brewing around 5:30 p.m. on March 17, it seemed like I had been missing out on Burlington's latest craze. Local seitan biz the New Deal was hosting a pop-up, and the place was packed.

Eventually, I realized everyone in the New North End brewery was wearing green and drinking Hearthside stout. But, Saint Patrick's Day or not, people were clamoring for plant-based wheat meat. There were plates on every table.

The New Deal's pop-up menu offered seitan in taco and sweet-and-sticky form, along with meat dishes such as corned beef and bacon-wrapped dates.

I paired a holiday-inappropriate elderflower saison with a heaping plate of seitan tacos ($10 for two, available vegetarian or vegan). Layered corn and flour tortillas were loaded with hefty chunks of seitan, ginger-balsamic black beans, pickled red onions, other veggies, cilantro and avocado crema. 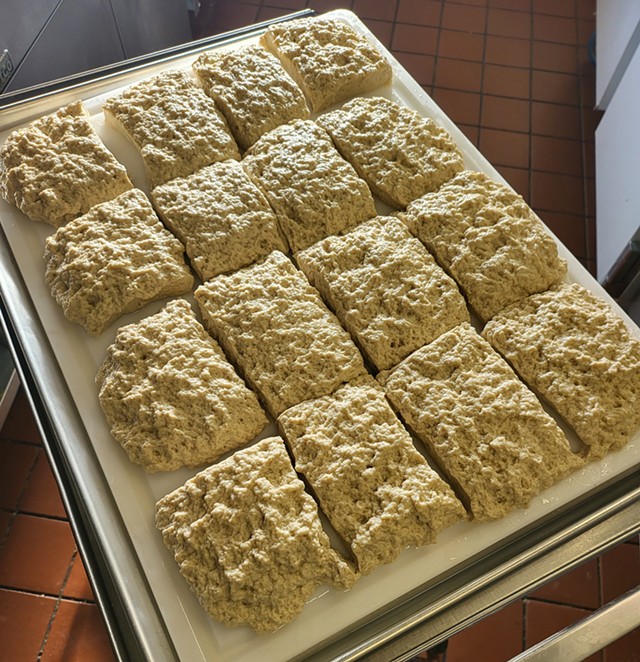 A few bites in, I vowed to make seitan a Saint Patrick's Day tradition — or at least a regular part of my diet.

Jeff Hodgdon started making seitan while working as head chef at Drifters, the now-closed neighborhood spot in the Old North End. He founded the New Deal in 2018, hosting pop-ups and selling seitan in bulk to City Market, Onion River Co-op.

This winter, Davis and Sophronia (Sophie) Williams joined the New Deal as co-owners. The couple are longtime restaurant pros who met while working at the Farmhouse Tap & Grill. Hodgdon is their neighbor, and Davis had helped him at several pop-ups that fall.

The trio makes batches of seitan together each week, combining vital wheat gluten — a flour-like powder made from wheat's natural protein — and water into loaves, which they poach and pack in a mixture of soy sauce, water and salt.

"Jeff came to us because he wanted to expand his business," Sophie, 28, said. "Now he's able to be the chef and focus on the food while we do all the background stuff." 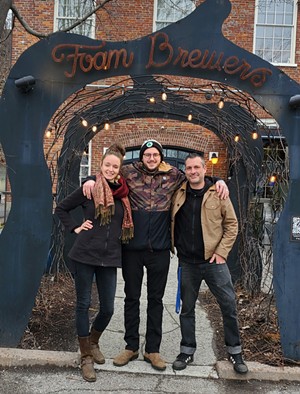 "With COVID, we realized we've given so much time to other people's restaurants," Davis, 28, added. "Why not give that time to our goal of opening a restaurant of our own?"

For now, the New Deal is selling seitan to local restaurants, including the Daily Planet, Butter Bar & Kitchen, Deep City and Zero Gravity Beer Hall, and doing more pop-ups — look for another one at Simple Roots on March 31.

This summer will see the launch of the New Deal's food cart, which will park at Foam Brewers every Friday and Sunday, starting at Foam's anniversary party on April 29, and at Shelburne Vineyard the first Thursday of every month from May to September. The menu will highlight seitan, of course, but also offer options for omnivores, such as burgers and gumbo with andouille sausage and chicken.

"We're chefs, and we like to experiment with everything," Sophie said. "But the meat industry isn't sustainable; we want people to know you don't have to eat meat for every meal."

"We just want people to give seitan a chance," Davis said. "It's like a sponge for flavor, and it's pretty limitless."

The original print version of this article was headlined "Wheat Success"