The Museum of Everyday Life Opens an Exhibit of Scissors 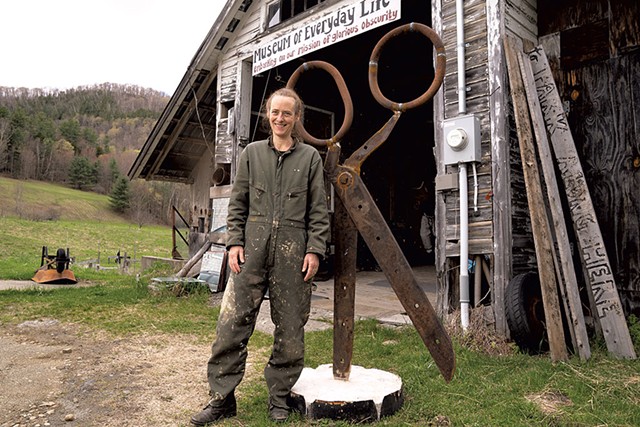 Over the past few months, Clare Dolan has amassed hundreds of scissors, ranging from tiny surgical implements to Turkish sheep shears, crusted with dirt and still smelling warmly of wool. The scissors have arrived mostly by mail, in fat tawny parcels and, in one case, a blue plastic bin containing more than 30 United Nations envelopes, each one containing a single pair.

Dolan is used to being the recipient of strange items — or, more precisely, mundane items in strange quantities — from donors near and far. As the founder and self-appointed chief operating philosopher of the Museum of Everyday Life in Glover, she traffics in the kind of quotidian objects that acquire a particular shimmer when displayed in a dilapidated barn alongside a Vermont state highway. Previous Museum of Everyday Life exhibitions have celebrated the safety pin, the key and the toothbrush — in other words, the stuff most people jam into a single kitchen drawer.

True to its name, the museum is, in fact, open every day. There are no docents or $10 headsets; none of the displays is behind glass. The only security guard is a stuffed, seven-foot-tall sheep-humanoid creature that looms by the entrance. Aside from being eminently Instagrammable, the museum offers a certain voyeuristic thrill, an open invitation to examine the cast-offs of other people's lives and squint at things so familiar to us that they've practically become invisible. Given that the barn lacks heat and insulation, summer is the ideal time for a pilgrimage.

Since early May, Dolan and a rotating cast of volunteers have been preparing for the museum's upcoming exhibit, "The Pivot and the Blade: An Intimate Glance at Scissors," slated to open on June 1. On Saturday morning, Dolan had been expecting six people to assist her with the installation, but all of them bailed at the last minute for reasons falling within the rubric of Everyday Life.

I hadn't gotten the memo — not that there's any cell service in Glover to text last-minute updates. So that morning, I drove up to find Dolan working solo. We proceeded to hang out in her house, a stone's throw from the museum. Garlands of drying tea bags hung in her kitchen window like Tibetan prayer flags; a turkey thorax, given to her by a neighbor, boiled in a large vat on the stove.

Dolan was dressed in olive-green coveralls, her hair tied back in a loose knot typical of the heroines in Victorian novels and contemporary hipsters. A birthday note from her father, stuck with a magnet to the refrigerator door, announced her age: 52.

On Dolan's kitchen table was a pair of antique weaver's shears from Sheffield, England, and a pile of paper snowflakes. The latter were of a far more advanced genus than the ones that decorate elementary school classrooms around the winter holidays. In fact, Dolan had made them herself. For reference, she used a book of Chinese paper-cutting patterns that she received from a friend who lives near the headquarters of the Zhang Xiaoquan Company, the oldest continually operating scissor factory in the world, dating back to the 17th century.

Dolan suggested that we test a few patterns from the book, which sounded like a fine way to pass the time while waiting for a turkey thorax to sterilize — until she opened a page of instructions written in Chinese. They were accompanied by a few minimally helpful illustrations, like the brochures that come with IKEA furniture-assembly kits.

Dolan, who earns a living as a nurse in the intensive care unit at Northeastern Vermont Regional Hospital in St. Johnsbury, seemed fairly confident about making incisions. I second-guessed every snip and wondered how people could subject children to this kind of craft roulette. But then I carefully unfolded the paper and — voilà! — it didn't look like complete shit.

Dolan, who spent more than a decade working as a puppeteer for Bread and Puppet Theater, has long been fascinated by the inner life of inanimate objects, particularly of scissors.

"Scissors have a beautiful formal design," she said. "They're incredibly elegant expressions of human ingenuity, and they're full of interesting dualities: They're domestic objects, and they're also very sharp and dangerous. And they're deeply feminine," she added. "I'm kind of obsessed with what's going on in our country with the whole abortion thing, and we're in this historical moment of calling attention to women in power. So it just seemed like the right time."

Once she committed to the idea, Dolan enlisted friends to put out a social media call for scissor submissions. (Dolan, who lives in a broadband black hole, doesn't use social media herself; whenever she needs the internet, she brings her laptop to the parking lot of the Glover Public Library and logs on to its Wi-Fi network from her car.)

Eventually, she got a call from a man named Harley Spiller, a scissor enthusiast living in Woodside, N.Y. He selected some of the greatest hits from his collection, which arrived in the large blue bin filled with UN envelopes. ("Where the hell does one even get United Nations envelopes?" mused Dolan.) Each envelope had a handwritten label describing its contents: "mini pinback," "mini tie clip," "wire cork."

One of Dolan's acquaintances, who spends part of the year in Istanbul, sent her the Turkish sheep shears. A woman from Portland, Ore., mailed her a pair of unassuming-looking first-aid scissors, included with every purchase of a specific brand of purple hemp rope used for erotic bondage. (The sender also enclosed a typed note, which read in part: "In formal rope instruction, which is a popular pastime in Portland, it is emphasized that before engaging in rope activities, one should show the safety shears to the rope bottom (the person who is being tied) and let them know where they are located for the duration of the rope scene in case an emergency occurs.")

The exhibit will feature each of these bequests, organized further by category: household use, folk paper artistry, topiary, hair cuttery, culinary frippery (i.e., an ornate Victorian-era implement used only by the extremely wealthy for the sole purpose of trimming table grapes from the vine) and other subdivisions of scissordom.

Inside the barn, Dolan's installation was in progress. A pedestal near the center of the room displayed a series of small, brightly colored scissors arrayed in splits and pliés, like tiny headless ballerinas. Other specimens lay on a nearby table, waiting to be arranged and categorized. There were frog scissors and snail scissors, impossibly tiny scissors and industrial-looking scissors. The latter, in theory, can accomplish 12 unique tasks, including opening bottles and scaling fish; it's the sort of gizmo you might be hypnotized into purchasing from a late-night infomercial.

In another corner of the exhibition space, Dolan will repurpose a painting of Gramercy Park in New York City, part of an installation from the lock-and-key exhibition last winter. The painting will provide a backdrop for hanging garden implements, which she plans to suspend from the ceiling with invisible string.

Dolan seemed particularly jazzed about a pair of Barnel pruning shears with sharp red-and-white blades. When I gave them a squeeze, they produced the kind of menacing swish you pray you'll never hear when you're home alone at night.

She's obsessed with the swishes of shears, which are sort of analogous to human voices — a distinct indicator of provenance, age and countless other biographical details. A pair of Scotch brand craft scissors makes an officious thwip, reminiscent of the gait of a middle-school principal I particularly disliked. An edge trimmer that Dolan found among old tools left by the previous owners of her property produces an ominous, rusty snarl, like the stooped-over groundskeeper of a sprawling English estate who says hello about once a year.

Anyone who has gone through the tedious process of finding the perfect coffee mug can probably identify the ideal pair of scissors: the proper ratio of blade to handle, the perfect weight, the right amount of resistance as you're cutting into an object. Conversely, just as many things can go horribly wrong: finger holes that are either too big or too small, an arthritic fulcrum, dull blades that gum away at whatever material you're trying to slice.

Dolan said she doesn't have a favorite pair in her collection, but perhaps she's still searching for the right one. When she picked up a pair with a handle designed specifically for a thumb grip, I asked her if the problem with most scissors isn't that the instruments are flawed but that we all just hold them the wrong way.

"I don't think there's ever a wrong way," she replied. "It really all depends on your purpose. And your hand."