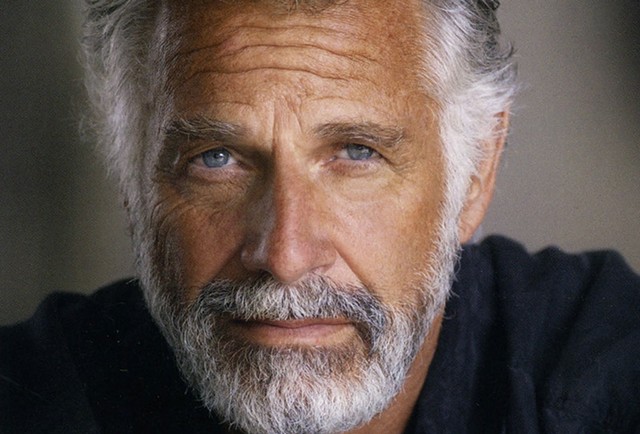 Over several decades, Jonathan Goldsmith went from California garbage man to the Most Interesting Man in the World.

Now the 80-year-old actor and Manchester resident will regale Vermonters with his Hollywood tales on the evening of Sunday, March 3, at the College of St. Joseph's Tuttle Hall Theater in Rutland.

Goldsmith spent six months driving a trash truck before he got into showbiz and, he said, "went on to star in over 350 shows and movies."

"I was a good journeyman actor. I got the respect of my peers," Goldsmith said. "Every once in a while, someone in public would recognize me."

That all changed when Goldsmith got an "incredible opportunity" in 2006. Dos Equis beer cast the bearded silver fox as the Most Interesting Man in the World in a series of incredibly popular commercials that turned Goldsmith into a meme-worthy pop culture icon.

"Stay thirsty, my friends," he'd say in the spots, turning to the screen while models gazed adoringly at him.

After that, everybody recognized Goldsmith, including then-president Barack Obama, who struck up a friendship with the actor during a visit to Vermont. Goldsmith got an invite to Camp David for Obama's surprise 50th birthday celebration in 2011, and the two later hung out at the White House.

"Interesting twist," he says in the two-second cameo, holding aloft a bottle of Stella beer.

Goldsmith and his wife, Barbara, settled in Manchester in 2010. In the warmer months, you can find Goldsmith fishing on Lake Bomoseen. He's also become involved in charity events, including the annual Beardies event at ArtsRiot in Burlington, which benefits the Make-a-Wish Foundation. This year's Beardies is on March 16.

So is Goldsmith tired yet of being known for his career-defining role as the Most Interesting Man in the World?

"Who could get sick of that?" he asked with a laugh.

The original print version of this article was headlined "Interesting, Indeed"

802 Much Jonathan Goldsmith Most Interesting Man in the World Tuttle Hall Theater, College of St. Joseph