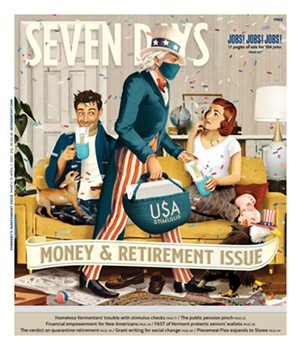 Even in the best of times, money is a top-of-mind concern for most of us. The past year or so has been anything but "the best," and the pandemic has made financial issues particularly pressing — and, for the most part, depressing. In putting together this Money & Retirement Issue, we found its COVID-19 backdrop both a blessing and a curse: There's no shortage of money and retirement stories out there, but where to begin? Is there any good news?

Recent stimulus checks have been a lifeline for many Americans. (That's good!) But they typically arrive via direct deposit or mail. How do people experiencing homelessness, many of whom don't have bank accounts or mailing addresses, access their cash? Colin Flanders looks at what stimulus checks mean for those living on the fringes.

Those stimulus checks have also been the target of financial scams, which are on the rise during COVID-19. (That's bad.) As Ken Picard writes, Vermonters older than 60 are defrauded more than any other age group. That's where Vermont's Financial Abuse Specialist Team comes in. FAST meets monthly to investigate allegations of fraud and financial abuse, particularly those targeting older Vermonters.

Maybe retirement isn't all it's cracked up to be, at least not in a pandemic. In an essay, recently retired justice Marilyn Skoglund ruminates on hanging up her gavel just as the world shut down. (Not really good or bad, but the essay is funny.)

For some, the pandemic has provided business opportunities. (Good, but...) As Carolyn Shapiro reports, Burlington's EZ-Probate has found its niche by helping the bereaved handle the transfer of assets after a death without navigating an expensive legal system.

Nonprofits may see new opportunities to effect positive change in a post-pandemic world. (Good!) But to do that, they'll need grants, which can be hard to get. Local grant-writing expert Barbara Floersch breaks down the process in her new book and urges do-gooders to approach grant writing with activism in mind.

Also good: momos. And they're profitable, too, according to Melissa Pasanen, who reports on the expansion of Burlington's Sherpa Foods from farmers market gem to regional momo powerhouse.

Finally, Sally Pollak reports that White River Junction eatery Piecemeal Pies is opening a new shop in Stowe after crowdsourcing scores of investors. As of March 28, 78 people had invested a total of $83,600 in the business. You can insert your own piece-of-the-pie joke here. (That's bad, probably.)