The Mommyheads’ Adam Elk on Success, Failure and Finding an Unexpected Audience 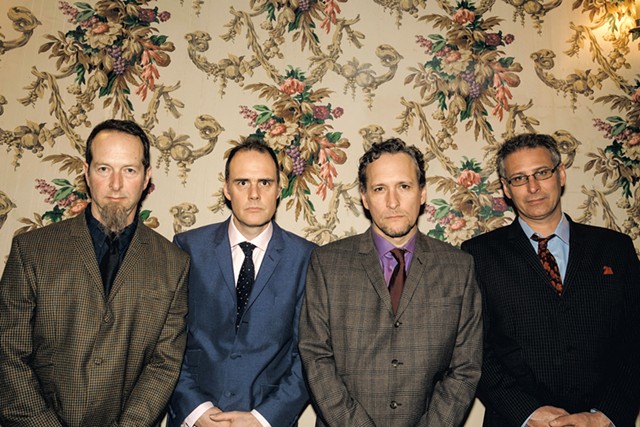 "If you wanna do music, you have to have a really thick skin," says Adam Elk, front person of the long-running, progressive indie-rock band the Mommyheads. "You have to really wanna take the abuse of not making money for years and years."

Elk speaks from experience, having gotten tantalizingly close to the big time. After a string of releases on fledgling indie labels starting in the late '80s, the San Francisco-by-way-of-New York City group landed a deal with Geffen Records in the mid-'90s. At the time, the label was issuing instant classics such as Nirvana's Nevermind and Weezer's debut. But as Elk explained to Seven Days in a recent phone call, things don't always go the way you think they will.

After a 10-year hiatus, the Mommyheads returned to form — and the East Coast — in the late '00s. The rock quartet, known for its progression from jangly indie pop to refined, anthemic rock, recently released its 11th album, Soundtrack to the World's End.

"Making music feels more like a glorified hobby [or] a way to stay healthy," says Elk. "There's definitely escapism. [It's] not a way to pay bills and stuff like that."

Speaking of paying the bills, Elk has been writing commercial jingles for years. If you watch TV, you've undoubtedly heard some of his work in spots for companies such as Apple and Vitaminwater and for shows including Netflix's "Ozark."

SEVEN DAYS: The title of your new album is really bleak. What's it all about? Death? Destruction? A certain American president?

ADAM ELK: I'll speak for musicians and maybe artists in general: You live in your own bubble. And you're sort of protected. It's a watery place where you just create, create, create. You could spend 20 years singing about your own stuff, and you kind of have your head up your you-know-what. And I recently started to look out of the bubble and not be so abstract.

A bunch of us [in the band] recently had kids. And when you have kids, you really start being concerned about what goes in their bodies and minds. And so [the album] is a way of communicating my frustrations with the world and ecology. It really happened recently, and we [were] really feeling it. [Those themes] really got into the music. There is hope and optimism in there, but there's also a lot of reality. We didn't want to preach. It was just our experiences.

SD: Which song best exemplifies that?

AE: "Don't Believe the Pilot" is sort of about authority. Does your pilot have your best interest? What is really happening in the cockpit of politics? We never know. We always find out 30 years later. But right now, we really don't know what's going on. [And] "The Final Phaseout" is literally about the end of the world.

SD: After breaking up in the '90s and re-forming a decade later, what were some things that changed for the Mommyheads about recording and distributing music?

AE: Everything. When we were an indie band, we'd print CDs, make vinyl, go around the country and sell them out of the back of our van. We knew every single person that liked us — every name of everyone who came to a show.

Then we get the Geffen experience, which was insane. They threw money at you. We got half a million dollars for one record. It was like a six-record deal that added up to millions. And then they realized, "Wait a minute. We signed this band? This band is not a hit-making band." We were ... too intellectual for our own good.

SD: Yeah, I was just looking at Geffen's output in the mid-'90s. Those were some of the biggest albums of the decade.

AE: The reviews [for OK Computer] were incredible. Before anyone had a chance to listen to our record, [our label bosses] were like, "That's not OK Computer, Guns N' Roses or Counting Crows. Drop 'em."

SD: Did they pull The Mommyheads from shelves?

AE: No, they left it on shelves — to sit there. The whole silver lining in this was that Geffen and DGC Records were so big, they had offices all over the world. And [our] records went all over the place. One of the places it went to — and we had no idea — was Sweden. The [radio] DJs there played the crap out of it for 10 years.

We were getting calls in the late 2000s from people going, "We've been waiting. When are you showing up?" We broke up 10 years [prior]. It was like a weird time warp.

So we got back together just to go to Sweden, and we show up and there are 300 people at the club, falling over themselves to see us. We were so humbled. We were like, "Nobody cares about us. What is this?" The prime minister was there. He was like, "I'm a fan." We just had the best time.

SD: I understand your album Finest Specimens can be traced to your Swedish fandom.

AE: These guys had a label in Sweden, Dead Frog. They said, "We're gonna make a compilation here. We're gonna pick 15 to 20 songs and sell them at shows and give you the profits." That was amazing. For guys who were almost 50, it was this kind of dreamscape.

SD: You've worked with producer Peter Katis quite a bit.

AE: Oh, Peter's the best. We were his first production. He just did Kurt Vile's [Bottle It In]. He's done all of the National's records. He's the king. He saw us at the Knitting Factory [in New York]. We became friends, and he was like, "I want this to be my flagship, first production." We did it in his parents' basement in Connecticut. It was quite an education. You knew he was a talent. He would never pass judgment. He was all in, went with the flow, put his opinions aside and just finished it. He's a closer.

SD: After playing music for more than 30 years, how do you keep the old tunes feeling fresh? Do you still relate to your older material?

SD: I think a lot of artists are like that, though.

AE: More now than back then. We listen to our songs from the mid-'90s, and they don't seem foreign because we're still fans of those influences. They don't feel alien. I don't think of a bad haircut when I hear the music that we made.