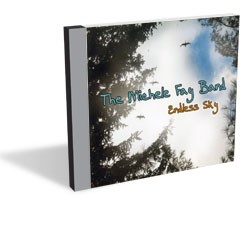 On their first two records, 2008’s Live and Local and 2010’s Travelin’ That Road, Ripton’s Michele Fay Band offered down-home roots and Americana that, while not especially flashy or virtuosic, both exhibited a certain humble appeal. In particular, the latter album showed marked improvement over the band’s debut, especially Fay, who corrected blemishes in her vocal style and delivered a roundly solid performance. Now the band is back with its third album, Endless Sky, hoping to continue that progress.

Previous reviews of Fay’s music have referred to her voice as “pleasant.” And it is. There is an ease to her tone that is familiar and calming. Hers is a voice made for lullabies, tender ballads and gentle, mid-tempo Americana. Fay obliges the last on the opening track, “Back Hill Country Town.” Laced with quaint rustic imagery — cold hard cider, crackling fires and dusty back roads — she paints a picture of idyllic rural life that is equal parts Norman Rockwell and Gillian Welch. Fay is a talented writer, but it’s her measured delivery that really that gives her words life, her cozy croon warming like a handmade quilt.

Interestingly, Fay’s greatest asset is also her — and ultimately the album’s — most unfortunate flaw. That taciturn approach doesn’t always translate, especially on up-tempo numbers. For example, “Fryeburg Fair” desperately wants to cut loose, like revelers at the barn dance for which it might have been written. But Fay’s staid delivery here is akin to a wallflower, content to sit on the sidelines instead of coaxing us onto the floor.

Similarly, cuts such as the Appalachian-tinged “Canada” and a cover of local songwriter Ben Patton’s devilish “Hot Sauce” suffer a lack of urgency — and, in the latter, necessary heat. Here, Fay delivers saucy lines like “Gimme that hot sauce, a little bit o’ ‘Hell, why not?’ sauce / a smidgen of ‘I like it a lot’ sauce / a little bit of whoopsie daisy” with all the playfulness of “Fresh Air” host Terry Gross at a Twister party.

But when she’s in her comfort zone, Fay is engaging. And her crack backing band follows suit. On the lovely “Willa Mae,” Doug Reid’s lithe fiddle pirouettes with Fay’s croon, while her husband, Tim Price, offers delicate accents on mandolin. Noted producer Colin McCaffrey, who engineered and mixed the record, adds nice touches on ukulele. And Jeremiah McLane makes some splendid guest turns on accordion.

Endless Sky has some fine moments and would be a worthy addition to the libraries of local folk fans. But one could long for a more consistent and complete effort from this talented group.

The Michele Fay Band release Endless Sky at On the Rise Bakery in Richmond on Friday, April 13.