The Mezzes and Wines Are Just Right at Montréal's KazaMaza 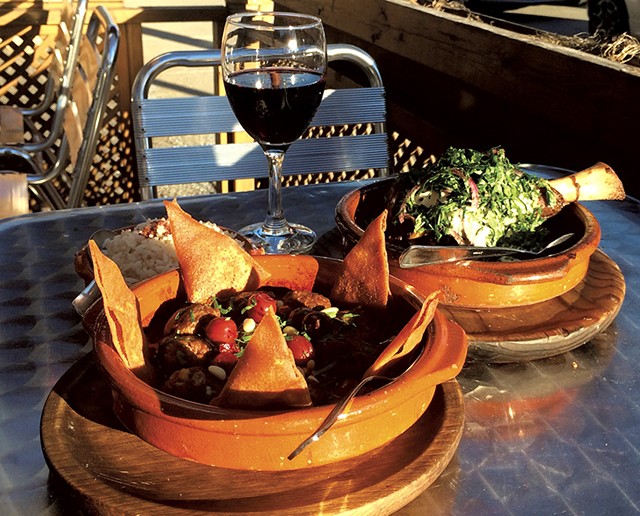 It was the foolish time of spring. The chilly morning had made me pull on layers of wool, but the afternoon sun found me discarding them so quickly that I was tricked into believing I wouldn't need a proper coat for the rest of the year. In other words, eating-on-the-patio season had officially begun.

On a sunny Saturday evening, we sat outside on the small terrace of KazaMaza, a Middle Eastern restaurant on Avenue du Parc in Montréal. Located in the trendy Plateau neighborhood, the street has a pleasant amount of city bustle but is still quiet enough for easy conversation.

"Did they give you any trouble at the border when you said you were visiting a Middle Eastern restaurant?" half-joked KazaMaza's owner, Fadi Sakr.

Such a concern had not been on my radar, but I understood why it was on his. During a previous meal at KazaMaza, Sakr told me he had decided not to visit the U.S., given the current president, for fear of difficulties with the border patrol. A Mexican Canadian diner echoed his sentiments.

Sakr, 42, grew up in the Beqaa Valley of Lebanon, studied theater in Beirut and immigrated to Montréal in 2003. In 2009, he opened KazaMaza, which serves food adapted from traditional Lebanese, Syrian, Turkish and Armenian-Lebanese dishes.

People have been making wine in the Beqaa Valley since ancient times; the Temple of Bacchus was built there more than 2,000 years ago to honor the Roman god of wine. Most Lebanese wines are still produced in the valley, and it's there that Sakr sources the ones he offers at KazaMaza. The restaurant serves wine from the area's oldest and largest wine producer, Château Ksara, by the glass, half carafe or bottle, along with nine other Lebanese wines and vintages from other countries.

Sakr referred to Lebanese wines as corsé — that is, full-bodied. Ksara's Réserve du Couvent is made from cabernet sauvignon and syrah grapes. I found it slightly tart and astringent, with flavors of black pepper and a fairly fruity finish.

The more refined 2011 Château Kefraya is a blend of cabernet sauvignon, syrah, carignan and mourvèdre grapes aged in oak for 18 to 24 months. High in tannins and in alcohol content (14 percent), it tasted of spice, subtle cherry and warm leather, like a smooth belt on a well-heeled cowgirl.

The wine was served alongside pickled peppers and mellow, barely bitter green olives that appeared to be bruised and cracked. Willingly riding the train of enchantment in a foreign country, I told myself these imperfections were a sign of something good — perhaps a sparing use of pesticides.

The slight heat of the pickled peppers made a pleasingly sharp contrast to the robust wines. Although they would be a bit bracing by themselves on an empty stomach, these bold wines pair well with the intensely flavorful but non-spicy food of the Middle East.

KazaMaza's menu, as realized by chef Omar Al-Maarabani, emphasizes its mezzes ($7-12 CAD) — small plates, hot or cold, that are especially conducive to sharing. Most are prepared in advance for rapid finishing and serving. Hence, our starters came out swiftly, though the vibe at KazaMaza tends toward slow savoring.

Our three mezzes were served with thin pita that would have benefited from being warmed up. The mutabbal betteraves tasted as bold as its fuchsia color. An energizing and vibrant jolt to the palate, it was made from beets that had been pickled, then roasted.

The vinegar tickled the back of my throat, while the roasting added sweetness and haunting depth. Smooth and silky, the mixture was puréed to perfection with tahini and garlic; lemon and sumac added to the tartness. Sakr said he thinks mutabbal betteraves originated in Syria, though the exact location is a bit of a mystery.

The mouhammara, made from ground walnuts and bread crumbs, looked pasty and unassuming, so its umami explosion was a shock of the most thrilling kind. The pomegranate molasses provided a shazam of tartness and sweetness, while the spices and oil added to the richness of the dip. If the mouhammara and mutabbal betteraves had an amplifier for their flavors, it would have to go up to 11 like the one in This Is Spinal Tap.

Comparatively subtle, the kibbé nayyé was a beef tartar minced with a bit of bulgur and baharat, a Lebanese seven-spice blend that often contains allspice, black pepper, coriander, cumin, cinnamon, nutmeg and clove. The spice was minimal in this dish, which kept the freshness of the raw local beef taste-forward.

Combined with the wine, these mezzes had the power to dissolve thoughts of border wait times, encouraging a hungry journalist to savor the present.

My partner and I split two entrées ($20 CAD each) that were deeply flavored but less intensely so than the starters. The kefta kebab bil karaz consisted of meatballs of minced local lamb, pistachios, walnuts, red onions and spices, served with rice. The meatballs were simmered in a sauce of juicy, slightly tart cherries and spiced with a hint of cinnamon.

Served in a clay pot, the dish was garnished with wedges of deep-fried pita and pine nuts. I've eaten enough rancid pine nuts, even at upscale restaurants, to generally avoid dishes containing them or to ask that they be left out. But the pine nuts scattered on this kefta were fresh and added a pleasing crunch.

The jarret d'agneau was a braised New Zealand lamb shank that tore easily from the bone. It was served with a rich yogurt-tahini sauce and topped with copious amounts of chopped Italian parsley. The reliably good yet under-celebrated fresh herb, with its grassiness and slight salinity, brightened the flavors of the long-simmered shank.

Guarding kitchen secrets, Sakr flatly refused to discuss which spices were used in which dishes. I scraped the marrow from the shank bone and pondered hints of star anise, along with nutmeg, clove and pepper. As the meal wore on and the sun lowered in the sky, I, coatless and chilled, shivered happily over the lamb, unwilling to vacate my place in the sun until we finished the main courses.

Eventually, we warmed up inside at the small bar. The interior of KazaMaza has a cozy yet dynamic feel with exposed-brick walls and chandeliers topped by brightly beaded shades. Protruding straight from the wooden bar top, beside the case of baklava, was a charming copper waterspout from which servers refilled red ceramic pitchers. Maybe the wine had gone to my head, but I found it lovely to see water, our most basic necessity, gathered and presented with such aesthetics.

Service was attentive and helpful; our server gracefully accepted my stilted Franglish without batting an eye, communicating the basics to me in French and the more complex concepts in English. In a busy restaurant on a Saturday night, that kind of patience was a gift for which I was grateful.

The walnut baklava, which Sakr sources from a local Syrian Canadian baker, was pleasantly flaky — not sticky-sweet as some baklavas are wont to be. But, if you like the taste of anise, try a digestif in lieu of dessert. Arak is an anise-flavored clear liquor from the Middle East. It's traditionally served with water, which turns the anise oil opaque. Arak can also be drunk as an aperitif or enjoyed along with the strongly flavored mezzes. A little sweet and not overbearing in its licorice flavor, it helped us digest all that lamb, tahini and spices.

At 8 p.m., the restaurant hummed with conversations in a variety of languages. Our bellies full and warm, we walked back to our host's apartment to drop off leftovers and re-layer for the night. I'm not sure if it was legal to walk around with a half bottle of Château Kefraya in my purse, but the motion did provide a sort of decanter-on-the-go effect. By the time we poured glasses for friends in Mile End, the wine had opened up enough to be enjoyable without food.