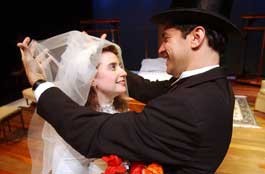 Back in the 1960s, when I Do! I Do! made its New York debut, the musical was considered raw and edgy, a trenchant summary of modern marriage. As with their hit show The Fantasticks, the longest-running musical in Broadway history, creators Harvey Schmidt and Tom Jones took generic characters and made them reexamine their ordinary lives. Is there more to existence, the dramatists pondered, than marriage, work and growing old? This question is at the core of Lost Nation Theater’s latest production, a quaint musical comedy about the rollercoaster ride known as love.

Nowadays the story of I Do! I Do! seems anachronistic, even naïve. Michael and Agnes are two young lovers who get married, promising to adore each other forever. As time goes quickly by, Michael’s passions start to stray and Agnes is tempted to leave the safety of home for adventures in the real world. Throughout the play, it’s clear the story sprang from a very different era, when men wore the pants and Betty Crocker held the spoon. They never had sex before their honeymoon. Agnes is a good housewife, organizing her husband’s wardrobe and washing cloth diapers.

Baby boomers should probably approach I Do! I Do! with a sense of nostalgia for those early rebellious days when holy matrimony first began to look like a shaky idea. To younger viewers, the musical’s central relationship may seem old hat — really, who doesn’t know that 50 percent of marriages end in divorce? But the salient themes are no less legitimate now than in the ’60s, and performers Joseph DiSalle and Kathleen Keenan strive to keep the work’s charming skepticism alive.

When we first see Agnes and Michael, they are preparing for their wedding, singing enthusiastically about their prospective future together. There is almost no dialogue, even during the happy couple’s first night in bed. There’s also no conflict — the songs have such sugary titles as “Together Forever” and “I Love My Wife.” For a solid half-hour, Agnes and Michael look like the cutest couple in history, untroubled by life’s little pitfalls.

Then things get complicated. Agnes bears children. Michael becomes a famous writer and, as he churns out book after book, his ego grows in inverse proportion to his declining interest in household affairs. The couple’s first arguments ensue and, by the end of Act 1, as the song explains, “The Honeymoon Is Over.”

The second act is calmer, showing how Agnes and Michael spiral towards old age, staying in their bedroom for New Year’s Eve and fantasizing about retirement. Again, the ambitions of this “modern” couple are a little dated; for them, retirement comes when their children get married, not when their 401K plan kicks in.

I Do! I Do! sometimes feels like a children’s play for adults — the characters are idea-driven and the music is light and amusing. The masochism and anguish of The Fantasticks is left behind, and things are never so bad that Agnes and Michael split up permanently. Modern audiences might hope for Agnes to storm out the door and never come back, as in Ibsen’s A Doll’s House, but Schmidt and Jones were too hopeful for that.

Though the play is sometimes simplistic, Agnes and Michael are not easy roles. DiSalle and Keenan are the only actors, and the sole setting is their large, well-furnished bedroom. They sing nearly two dozen songs in tandem and impersonate youthful energy, middle-aged boredom and jovial senility in less than two hours. Agnes and Michael may be archetypes, but DiSalle and Keenan capably give them their own inner lives, their own private jokes — nuances as simple as Agnes always forgetting to grab her purse before going out.

Director Tim Tavcar has good vision, tight control of blocking and the rhythm of dialogue. The show runs smoothly throughout, and the symbols of the protagonists’ relationship play prominently: the typewriter represents Michael’s overworked brain; the toy cart Agnes lugs around suggests the burden of her offspring; the crocheted pillow on the bed reads, “God Is Love.” With metaphors as overt as these, it’s amazing James Joyce isn’t credited in the program.

Because the cast is so small, it’s easy to get diverted by Dean Acheson’s beautiful set design, a lavish oversized bedroom with matching furniture and hardwood floors worthy of any suburban tract home. The king-size bed and colorful desks and closets are homey and functional, and Tavcar ensures that the actors exploit them all.

But Acheson’s set isn’t just the inventive eye candy we’ve come to expect from Lost Nation Theater. He cleverly leaves out extraneous walls and borders, and the wooden floor extends unevenly into the theater’s wings. Rather than enclosing the bedroom, Acheson frames it with massive blueprints, drafted in pale blue lines. This small addition is subtler than the play itself, but contributes a great deal. Relation-ships are a work in progress, it suggests, and a lot can change between design and execution.

The pillow may suggest that God is love, but Acheson’s message is more profound: Love, like all things, is a project, subject to revision and frequent repairs.