The Magnificent 7: Must See, Must Do, October 12-18 | Magnificent 7 | Seven Days | Vermont's Independent Voice

Catamount Arts in St. Johnsbury presents Ann Young's "In a Dangerous Time," a collection of paintings that depict nature in the abstract or people around the world living through difficulties. Included in the exhibit are three commissioned paintings of the Sahrawi activist Sultana Khaya, whose home in Western Sahara is colonized by the U.S.-backed Moroccan military.

Mummenschanz: 50 Years celebrates a half century of a global theater phenomenon. Performing at the Dibden Center for the Arts at Northern Vermont University-Johnson, this Swiss troupe uses light, shadow and unconventional props to take audiences on a visually stunning — and entirely wordless — trip into a world of imagination and splendor. 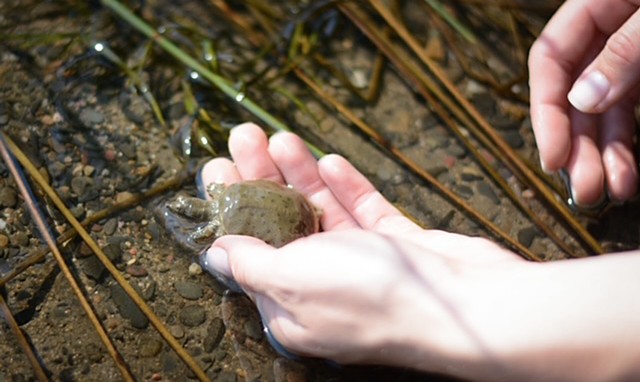 Spiny softshell turtles may be endangered in the Green Mountain State, but Vermonters are coming to the rescue. Volunteers join Vermont Fish & Wildlife Department staff at North Hero State Park for Nesting Beach Cleanup Day. After clearing the lakefront of excess vegetation to make room for the baby reptiles, everyone carpools to another location in Swanton.

Chicken and the Egg

Richmond's Maple Wind Farm hosts Meet, Greet & Eat, a community event for locals curious about where their chickens, turkeys and eggs come from. The afternoon includes farm tours, a lesson in using the whole bird, a Q&A with farmers about pasture raising, a load of family-friendly activities and plenty of delectable lunch options.

Thanks for the Memories

It's a combination author reading and retirement party when Sen. Patrick Leahy makes an appearance at Ira Allen Chapel in Burlington. Phoenix Books and the University of Vermont cohost this celebration of Sen. Leahy's recent memoir, The Road Taken, which tracks his life and long political career, from Watergate to today.