The Magnificent 7: Must See, Must Do, November 10 to 16 | Magnificent 7 | Seven Days | Vermont's Independent Voice 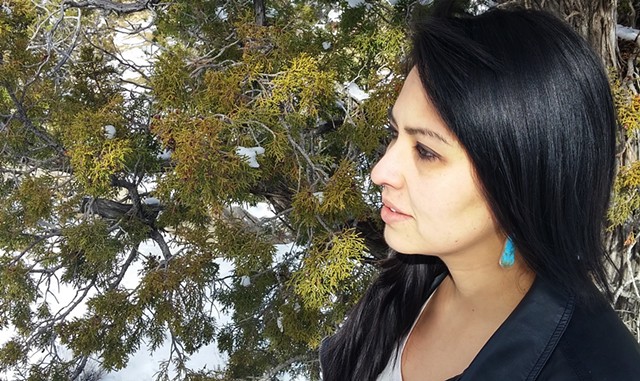 Vermont Studio Center welcomes Paige Buffington to the virtual stage as part of its Writers on the Rise series. The Navajo poet and teacher has published in The Diné Reader, Narrative magazine and elsewhere, and her poem "All-American Biography" was named "Best Western Poem" by the Western Writers of America in 2016. She is at work on her first book.

Advocacy group Music to Life hosts Artist Changemaker Workshop, a day of panels and networking for artists who aim to make a difference as activists, at the Main Street Landing Film House in Burlington. Featured speakers include poet Rajnii Eddins, singer Myra Flynn and comedian Omega Jade (pictured), and topics of discussion include coalition building, branding and measuring your impact.

Schumann Quartet, one of Germany's most lauded string ensembles, comes to Middlebury College's Robison Hall for an evening of stunning musicality. The program features pieces by Felix Mendelssohn and Maurice Ravel, and acclaimed Vermont pianist Diana Fanning joins in for Robert Schumann's Quintet in E-flat Major.

Cowboys, McDonald's signs and other symbols of American wastelands populate mixed-media collage artist Vanessa Compton's solo show, "Grandmother," at Burlington's Karma Bird House Gallery. At her talk on Thursday, Compton explains the connection between these new works and her family history. The exhibit is on view through December 9.

Thank You for the Music

Dancing queens from far and wide convene at the Woodstock Town Hall Theatre for North Country Community Theatre's production of Mamma Mia! The beloved jukebox musical tells the story of a mother, a daughter and the daughter's three potential fathers, set on a paradisiacal Greek island and soundtracked by ABBA's timeless disco hits.

South Burlington resident and Eritrean chef Mulu Tewelde puts her process on display at a free, virtual cooking demo at Burlington's City Market, Onion River Co-op. Viewers watch as she cooks the rich mushroom sauce ingudai tibs and her fresh, flavorful beet salad. Those who know Tewelde from her Ethiopian and Eritrean pop-up events and catering business take home a few tricks of the trade.

Talk to the Land

The Northeast Organic Farming Association of Vermont kicks off its 2021 Agricultural Literacy Week with "We Are the Land," a virtual bilingual program of Nulhegan Abenaki stories and songs about the millennia-long Indigenous relationship with the Earth. Joseph and Jesse Bruchac share such legends as the creation of Petonbowk (Lake Champlain) and the coming of corn.