Starting its third year of residency at Hopkins Center for the Arts in Hanover, N.H., Dance Theatre of Harlem presents a preview of Sounds of Hazel. With stunning choreography by Tiffany Rea-Fisher, this new ballet tells the story of Hazel Scott, a pioneering Black pianist who had an indelible impact on the jazz and classical music worlds.

Knit Out the Vote 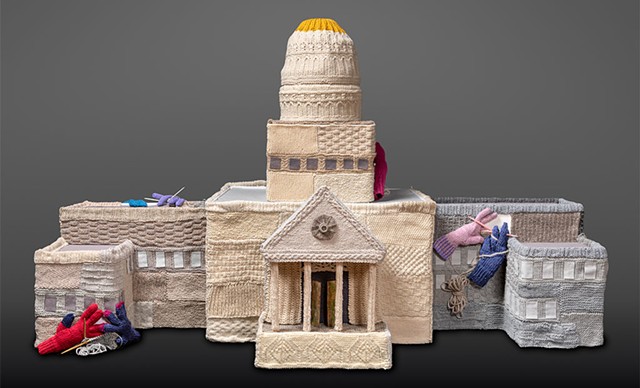 The Crispy Pork Gang, the devilishly clever parodists behind popular spoofs of Jaws and Alien, return to Warren's Phantom Theater to skewer everyone's favorite dysfunctional TV drama in Succession: Vermont. Audiences cheer for the owners of a small Vermont creamery as they resist the Roys' attempts to buy them out in this gut-busting goof-fest of epic economic proportions.

As locals wander away from a long day of revelry at the Festival of Fools, they can wind down with the Twilight Series appearance of New York City indie trio Saint Mela at Burlington's City Hall Park. This group's genre-bending melodies are just as intricate and acrobatic as the nearby circus performances.

Recent studies published by ProPublica and the U.S. Environmental Protection Agency indicate that Vermont is one of the most climate-resilient states in the nation. People who've moved here to escape extreme weather can find each other and build community at the Climate Migrant Meet and Greet at South Burlington's Temple Sinai.

The Moth StorySLAM, the live storytelling international phenomenon, comes to Burlington's Main Street Landing Performing Arts Center Film House for a rivetingly real competition. Each orator recounts a five-minute true tale about the night's theme, "Happy," for a chance to appear on NPR, and audiences laugh and cry along.

I Dreamed a Dream

The Northeast Kingdom Artisans Guild's Backroom Gallery in St. Johnsbury presents "Under the Hemlock Tree," a new solo show from local mixed-media artist David Ricketts. The collection is heavily inspired by Ricketts' own dreamscapes. Viewers are invited to learn more at a meet-the-artist event on Saturday, August 6.