A perfectly tuned overtone can be just as thrilling as a sick guitar solo, and Grammy Award-nominated vocal ensemble Stile Antico proves as much at Greensboro's Highland Center for the Arts. Singing unaccompanied and without a conductor, the group brings a sense of immediacy and an immaculately vibrant sound to Renaissance polyphony.

We Quilt This City 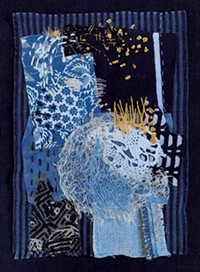 The Furchgott Sourdiffe Gallery in Shelburne presents "Feral Stitching: Four Artists Go Wild," a joint show by intrepid quilting colleagues Sarah Ashe, Janet Fredericks, Kari Hansen and Lily Hinrichsen. A year ago, these four friends began challenging each other to break bedspread boundaries, and the wild, colorful, experimental needlework in this exhibition is the result.

Fifty years after the passage of the Clean Water Act, University of Vermont student Jordan Rowell presents No Other Lake, premiering at Burlington's Main Street Landing Performing Arts Center. The documentary follows Rowell over the course of two weeks as he paddles the entire length of Lake Champlain, speaking to locals and conservationists about the future of the watershed he grew up on.

Key to climate action is understanding that every living thing on Earth is connected. At Mobilization for Pollinator Survival's Earth Day March & Rally for All Species, activists of all ages don costumes, sing songs and declare their allegiance with all creatures threatened by the climate crisis while marching from Montpelier City Hall to the Vermont Statehouse to demand environmental reforms from lawmakers.

Who You Gonna Call?

Everybody's working for the geek-end. Superheroes, aliens and time travelers of all stripes suit up for the Vermont Sci-Fi & Fantasy Expo at Champlain Valley Exposition in Essex Junction, a celebration of all things nerdy. Attendees experience two days of panels, workshops, gaming demos and lightsaber lessons — and may even snag a ride in the Ghostbusters' Ecto-1.

Women and nonbinary folks at every level of birding experience, from avian ace to bird-curious, gather at the Green Mountain Audubon Center in Huntington for Women Who Bird: April Arrivals, cohosted by Audubon Vermont and the Pride Center of Vermont. Binoculars and guides are provided as the group heads out in search of migratory feathered friends already building their springtime homes.