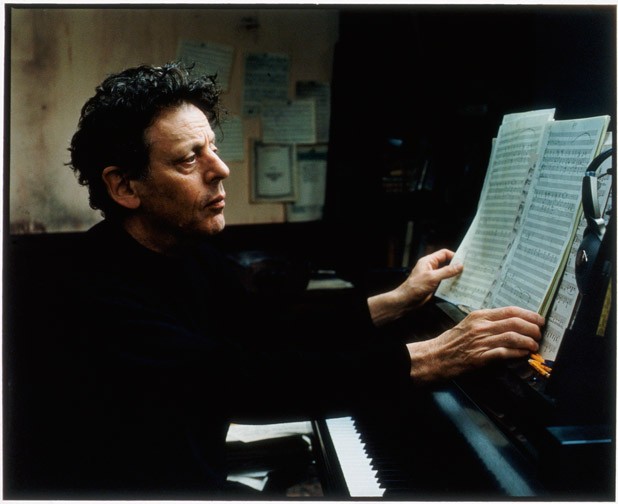 For a composer regarded as a pioneer of minimalism — a genre that British music critic Ian MacDonald once dubbed the “passionless, sexless and emotionally blank soundtrack of the Machine Age” — Philip Glass is one chatty fella.

Glass is the best known of a generation of composers who blossomed as part of an artistic and intellectual counterculture revolution in the 1960s and ’70s. Collectively, they introduced the abstract, repetitive language of minimalism to mass audiences.

“That was never a word I used,” he says in a recent phone interview.

That’s true. The origin of the term “minimalism,” as it relates to music, is attributed to either of a pair of critics and composers, Tom Johnson and Michael Nyman. Both claim to have coined it in the late ’60s in reference to the music created by Glass and his close-knit group of composer contemporaries.

“They were friends of ours,” Glass says of Nyman and Johnson. “But we didn’t use [the word].”

Worse, he finds it confusing, especially in relation to his later work.

“The difficulty is that if you describe music that I’m writing in 2009 or 2010 the same way as music I wrote in 1979, it doesn’t help listeners,” Glass says. “They look for textures that aren’t there, for things that they’re not going to hear.”

He concedes that much of his pre-1980 canon does fit within the accepted definition of minimalism. But Glass bristles at descriptions that lump his contemporaries together by perceived similarities.

“If you look at that music, I would say what is interesting about these composers are the differences,” he says. “Take the vocal music of La Monte Young and Meredith Monk. They’re in different universes. You can say they’re both ‘vocal music,’ so that helps you. But we can look at it a different way,” Glass suggests. “Look at it as music that comes from a particular period of time.”

He’s referring to a roughly 10-year span beginning in the late ’60s when Glass and other young composers were “redefining the language of music,” as he puts it.

“What we were trying to do was to create a language, each of us in our own way, that would be suitable to achieve some of our goals,” he says. Chief among those goals: “to live in the art world, in which we had an engaged and educated audience, and in which we had a dialogue with the audience,” Glass says.

That musical vocabulary developed both from personal experiences and lessons taken from the composers of the previous generation, including John Cage and Morton Feldman.

“It was the independence of those composers that interested us, not so much the music,” Glass says, “though, in fact, their music was beautiful.”

The new language of minimalism actually was composed of various dialects. Says Glass, “Terry [Riley] was a great improviser. La Monte’s music was beautifully conceptual, and at the same time it had an earthiness to it. Everyone had a unique way of working.” But all these composers shared an ideal.

“What we had in common was that we did not follow the prescription of the generation before us: that the future of the music was heading in a certain direction, and they knew exactly what it was,” says Glass. “They had their map, and they expected us to follow. But you know what? We didn’t.”

Glass acknowledges “the personal and distinguished achievement of a wonderful generation of composers,” but says he and his contemporaries did not care to sound like their predecessors.

Now, the 73-year-old Glass is himself in an older generation of distinguished composers, and he’s aware of his iconography. He doesn’t teach at a school, but he’s helping younger composers chart their own maps through MATA, the nonprofit he cofounded in New York City that commissions cutting-edge works for an annual festival and other concerts. Glass also hires young composers to perform odd jobs around his studio, he notes.

“One of the things that interests me is their way of thinking,” says Glass of his young admirers. “We’re now talking about music that depends, in a way, on digital technology and digital techniques.”

Glass, who still composes with pencil and paper, says he was initially puzzled by how this younger, technologically savvy generation responded to his work.

“And then it occurred to me that my way of working, though it was predigital, was a system that was not so different,” he says. He explains that the rigid structure of his early music is based on a system of adding twos and threes together. Digital systems are based on ones and zeroes.

“The structure of my music is binary, and it happened before we even had that language,” he says. Glass notes that, while the “outer science” of his work and that of postdigital composers may look different, structural similarities have aligned his music with that of a new generation. “Which, of course, I find a delightful coincidence,” he adds.

Despite his influence, renown and incomparable career success in his field, Glass says he still feels like an outsider in certain circles.

Sarcasm aside, Glass enjoys the appreciation of musicians and composers several decades his junior.

“The interesting thing is that the early music I wrote in the ’60s and ’70s is being played by younger people now,” he says.

Glass’ own ensemble still regularly plays music from that period. “And we like it. And other people like it,” he says. “But they didn’t like it in the ’70s.”

There are still “bastions of mainstream music” that won’t touch him, Glass comments. His response: “I know where I can’t go. And it’s not worth going.”

His solution? Wait ’em out.

“What I learned long ago is that your enemies never change their minds about your music,” he says. “They die.”

Philip Glass performs at the Flynn MainStage in Burlington on Saturday, April 2, at 7 p.m. $24-40. His concert is the first part of a double bill with Lucinda Childs’ Dance, for which he wrote the music, 9 p.m. $50-65 for the two.