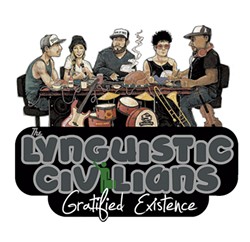 The Lynguistic Civilians are a Burlington rap crew who ... wait, that's not quite accurate. They are the Burlington rap crew. The LCs have been voted Vermont's best hip-hop group in the Seven Daysies awards for five years in a row, a run not expected to end in 2016. This is largely thanks to the work ethic that has seen the group bring its engaging live show up and down the East Coast, as well as into nearly every available bar, pub and venue in Vermont.

Over those years, the Civilians have built up a modest discography yet seldom managed to bottle their lightning in a studio. But their latest release, Gratified Existence, doesn't just break that streak. It demolishes it.

Gratified Existence synthesizes the best of the crew's previous releases, especially Urban Priorities, their 2014 EP with live band the Mangroves. The new album's production features a lot of percussion work from their longtime drummer, T. Whip, which gives many tracks here a huge, organic sound. Even the sample-based beats sound fuller than anything the LCs have put out to date. After the flat beats and muddy mixes of their previous releases, everything here is a revelation.

The album is packed with impressive guest features, kicking off with Brooklyn rap legend Masta Ace on the first track, "'88." Several other tracks feature name-brand rappers, but several from the Green Mountains make the strongest showing. Windsor crew Maiden Voyage swing through for "All Aboard," a posse cut of nautical puns that can get pretty painful. Vermont veteran Konflik also makes two notable appearances on "Triple Distilled" and "Certainly Working." One of the surprise highlights is "I Like It," a collaboration with Burlington funk-rock group Gang of Thieves that manages to be much more than the sum of its parts.

While Gratified Existence is a big evolution in terms of sound, little else deviates from the script that the Civilians have been perfecting since 2011. This is party music, and the album works best when it aspires to be little else. On songs such as "Drink Funky," "Beautiful" and the breezy "Learn How to Drive," the crew is firing on all cylinders.

The recording ends with two gloriously idiosyncratic weird notes. First up is "Bumpy Goose," a very non-scary concept track about nightmares. Then comes closer "802 News," an upbeat pop-rap ode to feel-good politics that wraps with a long "Feel the Bern" outro hook. Whether that one pans out to be prophecy or comedy, it may go down as the only presidential endorsement rendered in rap format.

Gratified Existence is, without question, the best Lynguistic Civilians album so far. Sadly, though, this may be their final effort. Scott Lavalla has been doing a lot of solo work on the side, and Lauren Craig has relocated to Boston, which casts some uncertainty on the group's future. If this does become a capstone production, the Civilians couldn't have planned it better. Gratified Existence encapsulates everything about the group's legacy, with a huge cast of significant guest artists. It's a beautiful thing.

Gratified Existence by the Lynguistic Civilians is available on iTunes.