Mike Korkuc never thought of himself as a bird person. Yet it is only a slight exaggeration to say he now spends more time with birds than with people — and may prefer it that way.

If you've visited the lively waters of Addison County's Lake Dunmore in, say, the past 15 years, odds are good that you've seen a lanky older gentleman piloting a pontoon boat, his own formidable beak burnished by the sun, peering through field glasses or perhaps a camera lens. He's fixated on his favorite waterfowl, with its rounded head, daggerlike bill and eerie, otherworldly yodel that shivers your timbers: the uncommon common loon.

"The first time I heard a loon," Korkuc said, "I thought it was a child crying." That wail and the elusive nature of its maker were the gateway that converted Korkuc into the Loon Ranger — an unmasked, unpaid protector of one of Dunmore's most exotic-looking birds. Nearing 80 years old, the still-vigorous Leicester resident has become the scourge of mindless powerboaters, Jet Skiers and wakeboarders who roil the waters, eroding habitat and upsetting nesting loons.

"Mike is just one of those people who really understands the importance of giving back to a community." David Phelps tweet this

Loons came off the state's endangered species list in 2005, and Dunmore's count reflects statewide trends. A record 109 loon pairs settled in the Green Mountain State in 2021, according to the Vermont Loon Conservation Project of the Vermont Center for Ecostudies.

For his efforts, Korkuc has received this year's Green Mountain Power-Zetterstrom Environmental Award, an annual honor the power company gives to one person, business, group or nonprofit that has made a significant contribution to Vermont's environment. Green Mountain Power named the award for the late Meeri Zetterstrom, a Milton woman whose efforts helped get the osprey off Vermont's endangered species list. A feather-shaped trophy carries a $2,500 donation to support the winner's ongoing efforts.

Korkuc, who has enlisted more than 300 volunteers in the cause, barely registers on the proverbial Kardashian Scale of Self-Promotion and typically deflects attention. "I'm not one to seek out the spotlight," he told Seven Days before agreeing to be interviewed in service of his favorite waterfowl.

"I grew up hunting pheasants," Korkuc explained. "My interest was in protecting game birds so that they were available [to shoot]."

That interest changed in 2007 when a pair of loons — who had been migrating to Dunmore since the mid-1990s but not nesting there — were spotted with a chick perilously close to boat traffic lanes. The birds' helplessness in the face of harm triggered interspecies empathy in Korkuc, who launched a floating patrol to safeguard the steadily growing loon population.

In a career that has included flying as a commercial pilot and working as a home heath nurse and ambulance squad volunteer (he has a nursing degree from the University of Vermont), "the most fulfilling occurrences that have happened in my life have been when I've been volunteering, giving away my time," Korkuc said. "That's what keeps me going. If somebody needs something ... I'm gonna leave it on the porch and walk away. They don't know where the hell it came from. And then people do the same for me."

David Phelps of Salisbury worked with Korkuc on the ambulance squad and, after reconnecting years later, was invited to join the loon patrol.

"Mike is just one of those people who really understands the importance of giving back to a community ... and making the community better," he said. "I think the looning is part of that. "

Korkuc, a Massachusetts native, moved to Leicester in the early 1980s and, 15 years ago, started monitoring loons daily on Dunmore and several smaller nearby lakes. Accompanied by his life partner, Rosie Spahn, Korkuc pilots his boat, the Loonatic — what else? — and adds to his more than 40,000 photos of the diva of diving birds.

Korkuc uses a blog to inform and educate occupants of the nearly 450 houses around Dunmore and tries to avoid confrontation with miscreants. Loons like to nest on two rafts put out by the volunteers and on an island in the middle of the lake.

"The biggest problems through the years are people on Jet Skis," he said.

He relayed one incident in which three Jet Skiers ignored signs on the island advising people to keep their distance. The scofflaws parked on the shore, about 30 feet from the nesting loons, so Korkuc went out to ask them to move along.

"'Fuck you,' a guy said. 'I'll do whatever I want,'" Korkuc recalled. "He started up and swung the Jet Ski around and tried to spray me with the water." 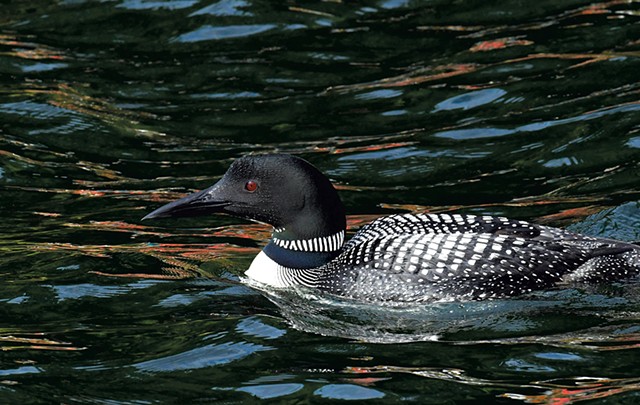 When the loon population was small, the birds were easily disturbed, and Korkuc couldn't get within 200 yards. As their numbers grew, so did the likelihood of human encounters. Two adults and two chicks are currently in residence on Dunmore, and another adult pair are day waders — loons that swim and fish in the lake but don't overnight there.

"We've watched the transition from [the loons] being really skittish and spooked to a point where I can get very close," Korkuc said, admitting that he's become a bit of a chick magnet.

When not on loon patrol, Korkuc is a dedicated Cajun and zydeco dancer, with Spahn. They traveled to events all over the state until COVID-19 cut in. When asked if he ever takes vacations, Korkuc replied, "From what? The lake?"

Jim Goodwin of Middlebury first met Korkuc three decades ago when he was learning to be a pilot, but he lost touch with his flying mentor. A couple of years ago, Goodwin was canoeing on Dunmore, "and I saw this guy in a pontoon boat, and we recognized each other," he said. Now Goodwin is another one of Korkuc's loon brigade. He praised his friend's dedication and added that the avocation seemed to "fill a spot [in Korkuc's life] somehow."

Recently, Korkuc took some visitors from Long Island out on the lake for a loon survey. Several chicks were floating close to the boat and became alarmed when their adult parents were not nearby. Amazingly, they dove under Korkuc's boat, as if for protection. "It was wonderful," Korkuc said, as his hand drifted across his chest and covered his heart. "They trust us."