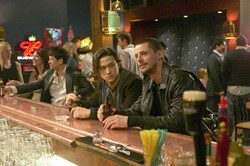 It's hard to believe Joseph Gordon-Levitt played an alien in the body of a teenager on the long-running NBC sitcom "3rd Rock From the Sun." In recent years, the squinty-eyed actor has been making a name for himself in indie movies such as Mysterious Skin and the neo-noir Brick, in which he managed to speak Raymond Chandler-esque dialogue in a modern setting without sounding stupid. A few weeks ago, Gordon-Levitt told The New York Times all about his fondness for escargots and French New Wave cinema.

It's nice to see not all precocious-child stars go the way of Danny Bonaduce. Gordon-Levitt's newest vehicle - and it is basically a vehicle - is the moody indie thriller The Lookout, written and directed by veteran Hollywood screenwriter Scott Frank. It's a visually atmospheric film, set in the grimy slums and desolate outskirts of Kansas City, Missouri, but it's also a very "writerly" one.

Like Memento and A Beautiful Mind, Frank's screenplay takes off on our modern fascination with flawed brains. If our mind is really just a physical organ, one that can malfunction in all sorts of ways, what does that say about our sense of self or our capacity for free will? In movies like this, people with mental illness or brain damage aren't objects of pity - they're metaphors for the rest of us.

That's certainly the case of Gordon-Levitt's character Chris Pratt, a high school hockey star who pulls a stunt with a car that results in a close encounter with a stalled combine. Chris rises from the wreckage externally intact but mentally slower: He has trouble "sequencing" events and holding things in his short-term memory, and he tends to blurt out whatever he's feeling. ("I think about fucking you all the time," he tells his pretty case worker.) But what he can't forget is that two of his friends died in the accident.

Alienated from his rich family, Chris lives with Lewis (Jeff Daniels), a raggy-haired, take-no-bull blind guy who has some of the movie's funniest lines. Lewis gives Chris tricks to aid his memory and tries to convince him it's possible to live a good life as a "gimp" - his word. But Chris can't give up the idea of returning to "the way I used to be." When he meets Gary (Matthew Goode), a smooth talker who remembers him from high school, he thinks he has his chance.

Gary introduces Chris to ex-stripper Luvlee (Isla Fisher of Wedding Crashers), who plies him with sex and sincere adoration. Soon Gary talks Chris into casing the bank where he works as a night janitor and snapping pictures of the vault. After all, he argues, there's nothing wrong with stealing from the big agri-businesses that deposit their harvest take there. Chris should know that "whoever has the money has the power." And in a podunk bank with no security, what could go wrong?

In a movie like this, the answer is everything. As the plot hurtles toward its fairly predictable conclusion, it's hard not to remember something portentous Gary tells Chris: that he's "the star of your own tragedy."

Lines like that one smack of over-writing; they give the film the feel of a short story that's been workshopped till it's jam-packed with "resonance" and symbolism. Frank even inserts the image of a nearby church's neon cross in the background of scenes in which Chris makes pivotal moral choices - get it?

But for all the screenplay's heavy-handedness, this is an actors' movie, and the actors shine. Daniels is joyously raunchy, British actor Goode is creepy, and Fisher somehow manages to make her bubbliness work in drama. As for Gordon-Levitt, he could be more convincing as a former BMOC - he's physically slight - but once he starts peeling back the layers of Chris' grief, anger, lust and humiliation, you forget about that. The Lookout may be part of his five-year plan to snag an Oscar nomination, but it's also an amazing performance in its own right.