The Little Brand That Could 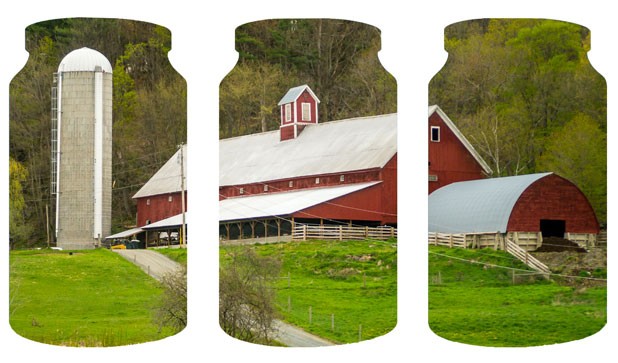 Wrapped in waxy, white paper, a round of Lillé Coulommiers from Vermont Farmstead Cheese Company sort of resembles a doorstop. Peel back the paper and slice into the tangy rind, though, and it’s clear why the stuff comes in such large wheels. Supple, rich and nutty, it’s instantly habit forming — and it comes even more alive when paired with a local sparkling cider such as Woodchuck Hard Cider.

Besides being delicious together, both products are poster children for the rise of the Vermont food brand, which made giant strides this year. The appeal of Vermont-made products shows no sign of peaking — especially as it grows to encompass spirits, meat and even wine.

“It’s had this strong and solid momentum for many years, but now, more than ever, it’s incredibly compelling and ‘sticky,’” says Kathy Murphy, the state’s chief marketing officer, of the Vermont brand. “The working landscape is the rooted theme for all of these products, and as that is leveraged forward, that truth is resonating.”

What Murphy calls the “clean, honest, humble and natural” attributes of the state’s food brand are embodied in the precipitous growth of the 2-year-old Vermont Farmstead Cheese Company, which produces Lillé — a soft-ripened cheese that has picked up a handful of awards already. The milk that goes into Lillé doesn’t travel far; much of it comes directly from the herd of Jersey, Holstein and Ayrshire cows that graze on the company’s 18-acre hillside in South Woodstock, repose on temperature-controlled water beds and yield nearly 2400 pounds of milk each day.

Even that quantity does not satisfy demand, which has increased so sharply — as it has for all of VFCC’s cheeses — that the company regularly trucks in milk from other Vermont dairy farms. Just last month, VFCC announced that its products would begin shipping to 15 other states.

Like many successful Vermont brands, VFCC cheeses have a great story behind them. It begins with the banding together of a few neighbors in 2009 to save an 18-acre water-buffalo farm and prevent it from becoming a slaughterhouse.

“This had been a farm for a long time,” says Sharon Huntley, VFCC’s director of marketing, explaining why 14 locals hustled to form an LLC and raise more than a million dollars to buy the property from its previous owner. Once they did, a “now what?” discussion led to the decision to veer away from fluid milk and toward a value-added product, cheese.

As Huntley relates VFCC’s backstory, she gazes through a window separating a hallway from the brightly lit cheese-making room, where another batch of Lillé is churning inside a giant, rectangular vat. On the other side of the glass, vice president of creamery operations and head cheese maker Rick Woods darts around in a white coat; he eventually emerges through a steel door to chat.

Woods was lured to VFCC after 16 years of cheddar making at Grafton Village Cheese Company, he explains. Ever since he took his current job, he notes, “It’s kind of been the MO to think out of the box and do different things.”

For instance, Lillé Coulommiers, which is a thicker, more intense cousin of Brie, is one of several “underappreciated cheeses” that Woods and then-head cheese maker Tom Gilbert tapped to help build the VFCC brand.

Woods also developed WindsorDale — crumblier and slightly tangier than cheddar — which he adapted from an 1850s Wensleydale recipe provided by an English colleague. The WindsorDale comes in a variety of flavors, including one infused with Harpoon Chocolate Stout. There’s also BrickHaus Tilsit, a cheese that originated with Dutch immigrants in Prussia; and a SugarHouse Edam speckled with fenugreek. During a visit last year, Gov. Peter Shumlin unexpectedly found himself helping craft a cheddar, a batch that VFCC then aged and dubbed Governor’s Cheddar.

“He thought he was coming here for a photo op, and we put him to work,” jokes Woods. Governor’s Cheddar recently won a bronze medal at the American Cheese Society’s 2012 awards.

Bowing to the public’s appetite for flavored cheeses, Woods uses berries, jalapeño peppers and smoke to flavor some of his cheeses — which are first aged, then double-milled and re-pressed. “They’re really stellar,” Huntley notes.

The awards began to arrive early, and the company’s growth has been faster than anyone anticipated. Earlier this year, VFCC opened a storage and affinage facility in nearby Windsor, in the same industrial park as Harpoon Brewery and the new distillery American Crafted Spirits. Just off Interstate 91, it’s a more visible and accessible location than tucked-away South Woodstock.

It was a wise move on the company’s part: For food producers hoping to tap the ever-increasing demand for Vermont-made products, remote locations can be an obstacle. Or, as Lee Kane puts it, “Quite a few people are out in the boonies.”

Kane is the New England “forager” for Whole Foods Market. He’s in charge of a team that mines for products to stock all the health-food giant’s 28 regional stores — “38 by next year,” he says. Many of those products come from Vermont.

“I try to get up there as much as I can. It’s a state filled with amazing, very passionate producers, and it’s a state that is not big enough to take care of their needs,” Kane says plainly. “A lot of Vermont producers have told us that they’ve tapped out the Vermont market as much as they can. They need to expand their market in order to stay alive and grow their business.”

After all, 630,000 people — or the fraction of that population that does the family grocery shopping and favors value-added products — can only buy so much Lillé. Or caramel from goat’s milk Fat Toad (made in Brookfield). Or maple cotton candy from Westfield’s Jed’s Maple Products, which Kane says sells like crazy in Whole Foods.

“People have this pastoral image in their heads of what a Vermont farm looks like,” Kane adds, “and, by and large, that could be an accurate image — pristine, clean, organic whenever possible.”

Kane and his team sometimes find new products at state-sponsored meet-and-greets that he likens to speed-dating events: “You spend 8 minutes with each vendor; then you move on to a new vendor.” This is how Kane discovered Red Kite Candy, another young Vermont food company that has rapidly expanded into other states, primarily via Whole Foods Market. “I had my bakery and my specialty foods coordinator literally fighting over that product for their departments,” he says.

Kane suggests that, in addition to quality and flavor, backstory is part and parcel of the enduring success of the Vermont brand. “More than anything, people are looking for natural, unadulterated things that have a really distinct, unique and wonderful flavor profile,” Kane says, “and, more than anything, they’re looking for a terrific story.”

That combo of stellar product and feel-good narrative was also instrumental to the recent meteoric rise of Woodchuck Cider. In October, the Middlebury cider maker, officially named Vermont Hard Cider Company, was snapped up by Irish giant C&C Group — which makes Magners and Bulmers Cider — for the lofty sum of $305 million.

The unsolicited purchase offer came as a surprise to Vermont Hard Cider president Bret Williams, who sank everything he had into Woodchuck when it was on the verge of failing in 2003. “I never thought I’d sell the company,” Williams says. “We never tried to get bigger; we just focused every day on trying to get better. As a result, we started to grow.”

Though Woodchuck bottles three million cases of cider each year, the company still has trouble keeping up with demand, and last spring it launched a multimillion-dollar expansion to add a visitor center and increase production fivefold. Then the deal appeared.

While Williams chalks up the company’s success to luck as well as to the growing number of cider drinkers, the Vermont mythos has a bit to do with it, too; after all, Vermont apple juice makes it into every bottle. “We’ve tried to model the brand and the company the same way we view Vermont as a whole: good people doing good things,” Williams says.

That message was so powerful that it traveled across the pond. “When we taste their cider, we recognize the same simple principles that we are using — local farms, straightforward fermenting and no additives,” says Joris Brams, C&C’s managing director of the international division. “Though I think we fell in love through taste rather than something else first, Vermont represents a very peaceful life, a green attitude, sustainability — completely in line with what our brand stands for,” he continues. “It’s a simple story: local apples, sustainable and green.”

C&C is not interested in changing a thing about Woodchuck, Brams says — not formulas, not employees and certainly not plans for new products, such as a cider aged in bourbon barrels.

At the Vermont Farmstead Cheese Company, new cheeses are under development, too, as are strategic partnerships with other Vermont producers; last week, for instance, the company announced that it had acquired Castleton Crackers.

VFCC is committed to spreading the gospel that cheese production can help transform Vermont’s flagging dairy industry and revive the working landscape. The company funds scholarships at area colleges for aspiring young dairy farmers with plans to create value-added products.

“We think that fluid milk is not a way for people to make a living anymore,” marketing director Huntley says. “We want to show young farmers that [cheese making] can be profitable and to show that there is a business to be had in dairy farming.”

“To see the number of Vermont dairy farms decline has been heartbreaking,” adds cheese maker Woods, who grew up in Cavendish. During his lifetime, the dairy farms in his hometown have completely disappeared. “If people know that Vermont has amazing artisanal cheese,” he says, “we all