The Lemon Flyers, 'Out to Sea' 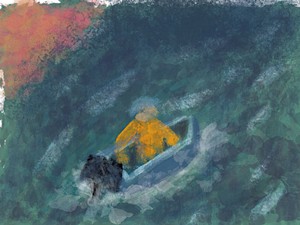 There is a transcendent moment — a little holy explosion of hail, hail, rock and roll! — about halfway through the third track of the Lemon Flyers' new record, Out to Sea. Guitarist Matt Kavanagh's solo comes screaming into the previously sedate "Mind on Fire" like a jump cut in a horror film. And while it may be the sonic high point on the LP, the Burlington band's second, it is hardly the only standout on an intriguing and sometimes mercurial record.

Perhaps the solos on "Mind on Fire" colored this notion, but on first listen I was tempted to label the record a guitar album. And, yes, I understand that the very idea of calling something featuring instruments other than guitar a "guitar album" is sort of ridiculous. But as the age of the bitchin' solo has waned, I'm guilty of being overexcited when I hear one. Besides, I would have been wrong anyway. There is so much more to Out to Sea than just killer guitar solos.

Matt and brother Sawyer Kavanagh certainly do lay down fabulous guitars all over the 10-track record, dispensing bright jangle and distorted grit in equal measure. The third Kavanagh brother, Alex, joins on drums along with the only non-Kavanagh, bassist Pat Buono.

Though Matt handles the majority of the singing, the band trades vocals, and occasionally instruments, throughout the album and harmonizes in a way few local bands are able to do. The interplay on tracks such as "Drifting Slowly" — which has an angular, Talking Heads-brand-of-funk feel to it — is easy to pick out. The Lemon Flyers have a lot of tools in their kit.

While 2019's Find a Way was a promising debut from a promising band, the songwriting on Out to Sea is clearly powered up. From the acoustic, folk-driven "Doctor," with its quavering plea to "Tell it to me straight / Doctor, doctor, please / We really got a lot to lose," to the Pavement-like "Keep Your Head On," the Lemon Flyers aren't trading in the currency of potential any longer. These aren't just songs to jam out on during a late night at the Monkey House. The band now displays cleverly crafted pop sensibilities to match its live show. (But, holy shit, do I wish I could see these guys at the Monkey right now.)

The Lemon Flyers tracked the record with Ryan Cohen and Sam Mark at Robot Dog Studio in Williston, a popular spot for Burlington bands these days. The sound is crisp and present, but Cohen lets the band's natural proclivity toward jangly indie rock shine through. It's a pleasing mix of lo-fi feel and high-gloss finish.

Out to Sea is a big stride forward for this quartet. Perhaps even more impressive than its progress is the sense of identity permeating the music. The Lemon Flyers are establishing a distinct sound in real time, and it is fascinating to listen along.

Out to Sea is available at thelemonflyers.bandcamp.com.

Speaking of The Lemon Flyers, Out To Sea

Album Review The Lemon Flyers Out to Sea