the le duo, Water of the Sun 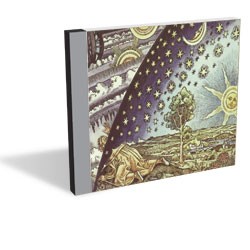 As its title suggests, an elemental paradox runs through Water of the Sun, the third release — and first on Mars Pyramid — from local “other music” stalwarts the le duo. The loose, mostly instrumental collective, helmed by Burlington’s J.B. Ledoux, and including such local luminaries as Rebecca Kopycinski, Will Ryan and Josh Laclair, has long mined the dark corners of experimental sonic terrain where few others dare to tread. But the group’s latest represents a surprisingly accessible journey, contrasting unwieldy aural concepts with sturdy rock archetypes.

Ledoux and company stir the black, primordial ooze on “Hell Boils.” The disc’s opening cut attacks with a torrent of spastic, distorted guitar and foreboding swells of ethereal noise. Ledoux’s rudderless — and meter-less — percussion outbursts are disorienting, adding to the track’s unhinged mania. But just at its apex, the maelstrom relents. Brutish guitars recede, yielding to a comparatively comforting din of arcing, high-toned swirls. However, it seems the le duo are merely catching their breath. Out of the shimmering fog, a sinister guitar riff — yes, an actual riff — emerges, marching the song to its battered conclusion.

The EP closes on “The Sunset Star,” which gurgles to life amid discordant electronic tones hastened by equally enharmonic vocal dissonance. The precarious balance between manufactured and organic sounds is at once combative and symbiotic. Ledoux orchestrates this clever paradox with great care, manipulating disparate tonal elements in such a way that none is overpowering or submissive. Weary harmonica staggers alongside bright, reverb-washed guitar. Blooms of ghostly noise burst and ebb against an easy drum beat, which holds the spinning mass together just enough. Particles of sound threaten to careen out of orbit at any moment but never quite do.

The le duo celebrate the release of Water of the Sun with a party at Radio Bean this Saturday, December 4.