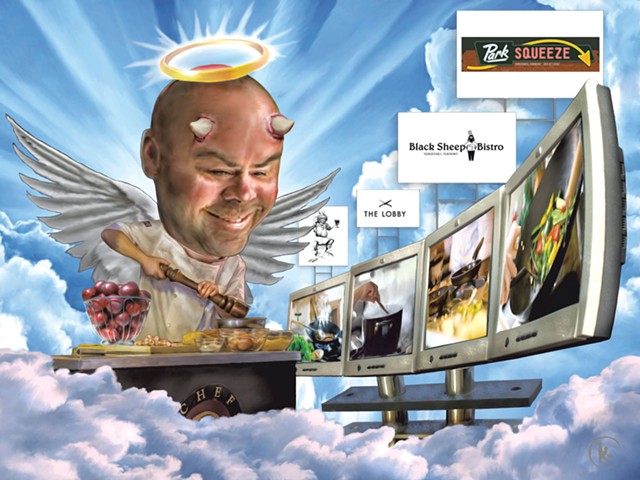 A few times a day, Dickie Austin — operations manager for the Vergennes Restaurant Group — would talk to his boss, chef Michel Mahe. Sometimes they conversed about business at one of the company's four restaurants: Black Sheep Bistro and Park Squeeze in Vergennes, the Lobby in Middlebury, and the Bearded Frog in Shelburne. Sometimes they talked like family, discussing what was on TV that night or the results of Mahe's son's soccer game.

In the late afternoon of Tuesday, July 21, 2015, Austin realized that he hadn't spoken to Mahe that day. Neither had Andrea Cousineau, the chef with whom Austin shares operational responsibilities. Austin drove to Mahe's house to find his worst fears confirmed: his boss, friend and mentor had passed away, unexpectedly, of a heart attack.

The preceding day, Austin recalls, had been business as usual. He and Mahe had met in the morning and talked by phone several times. "Mondays are never great," Austin says. "But it wasn't 'I'm going to die tonight' bad."

Austin and Cousineau — now the restaurant group's executive chef — dismiss the posthumous stirrings of the local rumor mill. Mahe had not been ailing, they say: After his 50th birthday, he had gotten serious about taking care of his health, scheduling physicals and slimming down. "He would eat a plum instead of a loaf of bread," Austin recalls.

Mahe did have some circulatory issues affecting his legs, and he felt the expected impacts of life as an entrepreneur in a notably grueling industry. But his doctors had recently told him his heart and lungs were in fine shape, according to his employees. "I don't know how I did it," Cousineau recalls Mahe saying. "I got a double thumbs up."

Granted, the chef's lifestyle wasn't entirely virtuous. "If you drove down Main Street in Vergennes at 8 p.m., you'd see us out in front of Park Squeeze drinking coffee and smoking cigarettes," Austin admits. "Would I call him the picture of health? Of course not. But at no point in the last six months of his life was I concerned."

Before his death, Mahe had been slowly laying the groundwork that would allow him to spend part of each year in Paris, but the restaurant group lacked an articulated succession plan. Says Cousineau: "It was hard for us with people feeling we were unstable when Michel passed." Nonetheless, the loss didn't spell the end of any of his restaurants. Though grieving, Mahe's staff stepped up to assume his responsibilities. Cousineau explains: "We were solid. Our people had been here."

That's not just lip service. High staff turnover is standard in the restaurant industry, but Mahe's world was different. Nine of the restaurant group's 11 managers had worked with the chef for more than five years; half had been with him for a decade or more.

Why? Austin and Cousineau cite the emotional support Mahe provided, his sense of humor, and his willingness to share responsibility and trust people, even when they didn't yet trust themselves.

Austin's first promotion happened after Mahe caught him in a lie. Hired as a front-of-the-house manager, Austin would tell suppliers he was the general manager in the hopes that they would return his calls. One day, Mahe overheard him using his "new title." The chef's response? An instant promotion. Mahe recited a list of tasks that GMs needed to perform and instructed Austin to show up for a management meeting that Friday.

Things happened differently for Cousineau, who started washing dishes at Starry Night Café when she was just 17. Mahe, who was then the chef at Starry Night, admired her gutsiness, delighted in pushing her out of her comfort zone and soon gave her a shot at working in the kitchen. When Cousineau was just 23, he brought her over to the Black Sheep as his sous-chef, and he eventually handed her the reins at the Bearded Frog. Over time, she became one of Mahe's main confidants and advisers. (With amusement, Cousineau notes that a rumor pegged her as the mother of Mahe's illegitimate daughter — though neither of them has a daughter.)

That's why, after Austin's terrible discovery that July evening, he quickly called Cousineau at the Frog. Both felt it was crucial that staff learn about Mahe's passing from their "restaurant family," not from social media or word of mouth. So the two broke the news to the management teams and, just as the evening of work came to a close, those teams returned to their respective restaurants to tell their employees. After service, Cousineau recalls, "People started pouring into my house. They'd just gotten out of work," and they came to grieve together.

The next day, Austin told Mahe's business partner. The group's investor asked if the restaurants would close for a few days, but that possibility "never crossed our minds," Cousineau says. "Michel would have said, 'How many bills are you going to pay with tears?'" As she tells it, Mahe's philosophy was "restaurant first, staff second, us third. How can the restaurant take care of us if we don't take care of it?"

Once the staff and the community had been informed, say Austin and Cousineau, the restaurants returned to business as usual, just as Mahe would have wanted it. Between his death and his memorial service — which drew visitors from all over the globe — everybody simply worked normally scheduled hours. Because Mahe had already entrusted his managers and chefs with most aspects of day-to-day operation, no dramatic shifts were required. Most of the extra tasks were "small, funny details," says Austin, such as visiting the bank to make sure he was an authorized signer on the account.

In recent years, Austin and Cousineau relate, their conversations with Mahe had shifted. He no longer exercised final decision-making authority; rather, the three of them were a team. "It became more of a conversation," Austin says. "He would have an idea or a concept, and he would sit down and say, 'Do you think we can do it?'" Cousineau adds, "He would sometimes stop himself and say, 'Hey, guys, am I right here, or am I wrong?' We actually had the ability to say, 'You are wrong.'"

As a result, not much has changed in the restaurant group's long-term plans. Austin and Cousineau are excited about growth and taking on new projects, such as catering, just as their mentor was. "He was so visionary. He saw things so clearly, and he moved very swiftly in the direction he wanted," Cousineau says. "Now we're creating new directions ourselves and taking on that daydream role."

For now, though, they're choosing to move at a pace more fitting to an escargot than a lapin. Before Mahe's death, the two say, they had agreed that this would be a stabilizing year, a time to settle in and perfect the existing businesses rather than chasing the next big dream. Says Austin: "Pretty much every month we've had to remind ourselves that it's only been so long, and we've already done a lot."

One thing the group's leaders are currently considering is "legacy maintenance": adding information about Mahe to the restaurants' websites and setting up a culinary scholarship in his honor. "Our work with Michel is not over," Austin says.

But it's sometimes tough without Mahe's irascible and funny presence. He could, as they put it, "really get away with stuff." "There are moments in time when I'm interacting with guests and I'm almost channeling him," says Cousineau. "[Afterwards,] I'll call Dickie and say, 'I just cheffed that.'"

"I've been in this industry 30 years, and I've never met anyone so knowledgeable," says Black Sheep Bistro front-of-house manager Andrea "Lady" Brien of her late boss. "He always knew the answer; he always knew how to do things the right way. I was constantly amazed."

It's similar for Cousineau. "At a very young age, I was given a lot of rope," she recalls, "and Michel would always be there in those moments when I was scared or second-guessing, and he would usher me [along]."

To some degree, Cousineau says, he still does. "I'll be making a decision, or going down a path, and I'll hear [his] running commentary in my head. I'll have to do the defensive part of the conversation," she adds. "Sometimes, I still lose."

Who's running the show at the Vergennes Restaurant Group eateries? 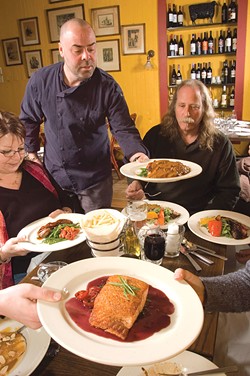 Here are a few notable excerpts.

MICHEL MAHE: Well, I don't drink [alcohol] anymore, so I would say my favorite beverage is water when I'm cooking, right out of the tap, like drinking from a river.

Black Sheep's kitchen goes up to 135 degrees in the summer. You go on as long as you can but you're literally dehydrating, and you know it. Then the rush is suddenly over, and you need water — it's not pleasure, it's need. You run the tap until it's really cold, let it run over your hands, put your hat in the water and then put your mouth down to it. It's a beautiful moment. When you satisfy that need, it's orgasmic.

SD: What kind of music do you like to listen to in the kitchen?

MM: I'm known as the "no-noise chef." If the music isn't off within two minutes of me walking in, I throw the radio out the back door. I've probably thrown 20 radios — it's a very funny thing. There are kitchens where I don't notice the music when I walk in, because it's low, and after a few minutes I start getting angry. When the music goes off, I'm fine.

I can't do two things at the same time. When I'm cooking, there's this noise in my head that I love, and I can't do anything else. It's Zen cooking: Be the food.

SD: If you could choose your last meal, what would it be?

MM: I would make myself a boeuf bourguignon, and I'd cook it all day and eat it all by myself.

The original print version of this article was headlined "Smooth Succession"