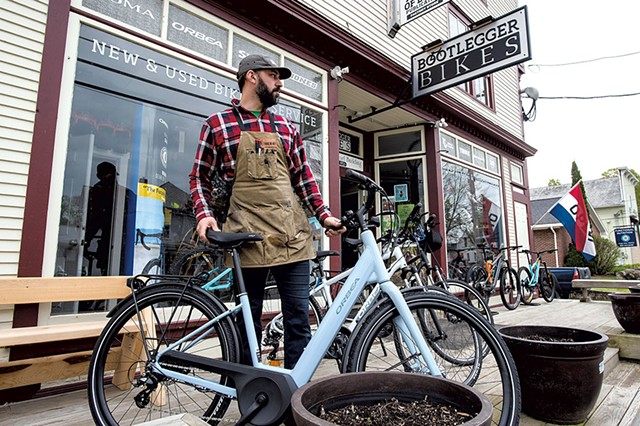 Matt Niklaus has been wrenching on bicycles since he was a teenager racing BMX bikes in central Pennsylvania. After college, he moved to Vermont and spent 12 years working as a plastics engineer at Husky Injection Molding Systems in Milton. Though he liked his employer, Niklaus missed his passion. So, in May 2016, he opened his own business: Bootlegger Bikes at 60 Main Street in Jeffersonville, named in a nod to the area's colonial-era history of smuggling.

Niklaus' entrepreneurial timing couldn't have been better. The Vermont Association of Snow Travelers had just finished constructing a 17-mile segment of the Lamoille Valley Rail Trail between Cambridge and Morrisville. The four-season, packed-gravel path zigzags along the Lamoille River and through woods, farmland and villages. Once complete, it will be part of a contiguous 93-mile recreational corridor extending from Swanton to St. Johnsbury — the longest rail trail in New England.

One day, supporters say, the LVRT may link to rail trails in New Hampshire and Québec. But it's already become an economic engine for the 18 towns and villages on its route, sparking the creation of new businesses and enhancing the bottom lines of existing ones.

The boost has been especially noticeable in Lamoille County, home to the most heavily traveled section of trail, where two thirds of the economy is linked to travel, tourism and hospitality. As winters get warmer, economists and planners are looking for three-season additions to the region's winter-sports mainstays.

Bootlegger Bikes, which primarily sells and services mountain bikes, gravel bikes, kids' bikes and hybrids, is less than a mile from the nearest LVRT trailhead. Daily, from June through October, three of its five employees staff a trailside bike rental station. During the peak months of July through September, Niklaus noted, his shop gets "a ton" of drop-in traffic from cyclists coming to or from the trail.

"From a touring and bike-packing perspective, the rail trail really opens up a lot of opportunities for people to create these cycling routes and never have to get on pavement, which has become quite dangerous to ride," he said.

According to Ken Brown, trails manager of Vermont Association of Snow Travelers, the busiest sections of the LVRT now get more than 20,000 visits per year, and nearly all sections see at least 14,000 visits per year. And, while the nonprofit snowmobiling group played the largest role in the trail's development, Brown reported that the LVRT is busiest, by far, in the summer and fall.

Small businesses like Bootlegger Bikes reap the rewards when the LVRT attracts visitors who might otherwise have driven through en route to more established tourist destinations. As Niklaus put it, "We haven't hit a plateau yet."

Just down Jeffersonville's Main Street, Jennifer Bishop reported a similar uptick in business since the rail trail opened. As founder and owner of the Farm Store, a local green grocer and natural-foods store, she said last summer she saw a large influx of cyclists coming off the rail trail in search of sustenance. 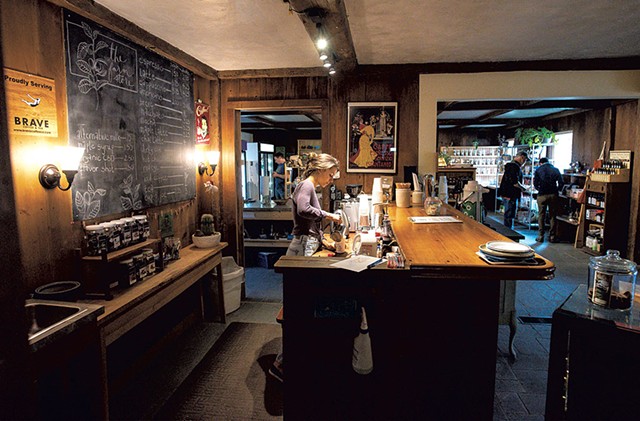 To cyclists making the round trip from Johnson or Morrisville, Bishop's market offers free Wi-Fi — so they can check in with their traveling companions — and refreshments such as Queen City Kombucha, salads from Vermont Fresh Pasta and fresh breads from Slowfire Bakery. Bishop said her organic and locally sourced fare are a perfect fit for this crowd: "People who are riding 25 miles on the rail trail don't want Lay's potato chips."

The Farm Store has also become a de facto meeting spot for Cambridge and Jeffersonville residents who pedal the 10 miles to Tuesday Night Live, a weekly concert series held in Johnson all summer. Bishop also sees riders headed to and from the Jeffersonville Farmers' and Artisan Market, held on Wednesday evenings at the end of Old Main Street.

In Johnson, Jim and Yva Rose have carved out their own rider-friendly business niche. In 2016, the couple founded Lamoille Valley Bike Tours, which rents and sells electric power-assisted bicycles, aka e-bikes, at trailheads along the LVRT.

"Basically, we wanted to get involved early on in the growth of the trail," explained Jim Rose, 38, a former environmental professional with Vermont Electric Co-op. E-bike tours, he said, "scratched that entrepreneurial itch for us."

From a tourism standpoint, e-bikes make a lot of sense, Rose noted. They attract both serious cyclists who want to extend their range and less able-bodied riders who otherwise might be intimidated by a trek as strenuous as the 17-mile segment between Morrisville and Cambridge that Lamoille Valley Bike Tours primarily serves. The electric two-wheelers, which are state-approved on the LVRT, can reach top speeds of 20 mph or be ridden like conventional bicycles.

"You always see more from the seat of a bike than from a car," Rose said, "and this connects these four villages and allows you to do just that."

Heading into its fourth year of operation, Lamoille Valley Bike Tours has expanded from 10 e-bikes in 2016 to 20 this year. The company now offers guided and self-guided trips, including the Bike and Brew Tour, which stops at Rock Art Brewery, Ten Bends Beer and Lost Nation Brewing; the Teahouse Tour, which visits the European-style Fledermaus Teahouse in the hills overlooking Johnson; and the Pedal Paddle Tour, which partners with Vermont Canoe & Kayak to get cyclists paddling the Lamoille River.

In the three years since Lamoille Valley Bike Tours opened, Rose noted, the company has seen its ridership triple, and 60 to 70 percent of customers come from out of state. The clientele also includes riders from a half dozen countries, who discover the company online and book short-term lodgings through Airbnb along the rail trail, Rose said.

"Here we are, this little mom-and-pop business, and we've got folks from Australia booking us and basing their little Vermont experience [on the LVRT] six months in advance," he said.

In Morrisville, Allen Van Anda and Jamie Griffith, cofounders of Lost Nation Brewing, said they were unaware of development plans for the LVRT when they moved into their building in 2012. Since then, however, it's been a boon to their business.

Lost Nation Brewing opened to the public in 2013 with a 45-seat indoor restaurant and tasting room. The following year, it opened an 80-seat outdoor beer garden — just as work wrapped up on the LVRT right behind the brewery. Today, much of the brewery's business comes from pedestrians and cyclists using the trail. Morrisville's community bike-share program keeps a bike shelter right behind the building. 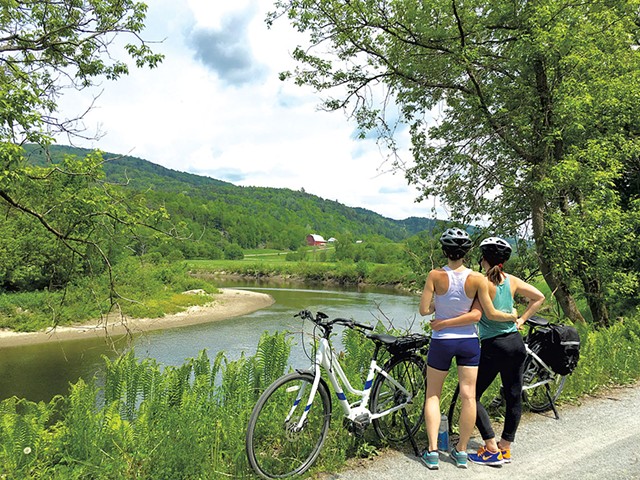 "You know what it's really good for? The community," said Griffith of the LVRT. "We see a lot of our locals use it to take a walk and coming here for a meal afterwards."

Van Anda remembers coming to work one Sunday and seeing only a couple of cars in the parking lot. He expected a slow day.

"I come around the corner, and the whole beer garden is packed. There were bikes everywhere!" he recalled. "We love being a part of the rail trail. There are so few win-wins in the world, but this is such a massive win-win."

Traditional tourism businesses aren't the only ones that have benefitted. Artist Karen Winslow owns Winslow Art Studio in Cambridge with her husband, Jack. Winslow, whose studio is celebrating its 40th year, now offers plein air "walk & watercolor" classes along the LVRT. The gallery provides the paper, paints, brushes, easels and bags to carry them.

For customers trying their hand at landscape painting, the LVRT is ideal, Winslow said. "I actually love painting over by the covered bridge along the rail trail," she added, referring to the bridge at Cambridge Junction. "I paint on the rail trail all the time. Basically, you're exercising your heart, mind and spirit."

The trail makes it easy for seniors to get out in nature, Winslow added. "It's wide, it's flat, and it's very easy to access. There's nice parking, there are Porta-Potties and a nice place to stand or sit — all the things you need for landscape painting."

So far, the LVRT has grown one segment at a time. That will change in the next couple of years, however, with the completion of a stretch connecting Cambridge with Sheldon Junction — where, as its name suggests, two now-defunct railroad lines once converged. There, cyclists will be able to connect to the 26.4-mile Missisquoi Valley Rail Trail, which runs from St. Albans to Richford. That connection, trail supporters say, will open huge cross-border travel and tourism opportunities, such as bike treks from Montréal and points north.

"Connecting up with the Missisquoi Valley Rail Trail just adds more mileage to these multiday tours," said Niklaus. "There's a ton of rail trail in Québec, and ... it'd be great to see people be able to cross the border on rail trails on bikes someday."

And bring their tourist dollars with them.