The Lady Is a Tramp 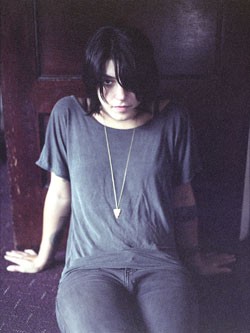 When she wrote and recorded her latest album, Tramp, Sharon Van Etten was homeless. No, she wasn’t a vagabond begging for change on street corners. But she spent that year couch surfing in Brooklyn, penning the songs that would make up the album in quiet, stolen moments when her hosts were at work or sleeping.

Tramp is a follow-up to two critically lauded efforts, Because I Was in Love (2009) and Epic (2010). Where those records were spare, cozy and mostly acoustic, Van Etten’s latest finds the notoriously shy indie tunesmith coming out of her shell. Produced by Aaron Dessner of the National, Tramp is noticeably louder and edgier, revealing a newly confident songwriter pushing her own boundaries while retaining her endearing confessional intimacy.

In advance of her upcoming show at the Higher Ground Showcase Lounge this Saturday, November 10, Seven Days caught up with Van Etten by phone to talk about her new album, under-the-radar songwriters and the pop genius of Kylie Minogue.

SEVEN DAYS: You were essentially homeless when you wrote and recorded Tramp. How did that transient lifestyle influence the album?

SHARON VAN ETTEN: I think bouncing around from place to place and writing it in pieces helped the album have a lot more variety. There’s more of a mix. I was nervous that would actually be a weak point of the album. But I think it ended up being a strength. Recording was actually the constant. It was the one place that I could go to. The grounding part was going to the studio.

SD: Not having your own space to write must have been a challenge.

SVE: Definitely. You have to plan your life around your host, because you don’t want to be the jerk that’s jamming on the guitar and singing her heart out until four in the morning.

SD: You have had a lot of guardian angels pop up over the course of your career, many of whom show up on the album, including Aaron Dessner. How did touring with the National influence you?

SVE: There’s something to be said for having a healthy relationship with the people you’re traveling with. And I think that shows in writing and recording, too. Aaron and his brother Bryce [Dessner], they’re twins. And Aaron has always said he’s more heart and his brother is more head. Bryce is more trained and classical, and Aaron is more rock and roll. So they have an interesting balance that’s inspiring. They also work nonstop. And that’s really motivating.

SD: Tramp is more rocking than your earlier albums. Did [Aaron Dessner] help you find your inner rocker?

SVE: The one thing I’ve wanted to do in the last few years writing and recording is to have a natural progression and let things happen organically. I went from acoustic guitar to a hollow-bodied guitar. Then I went into the studio and Aaron hands me his brother’s Jaguar. And when you play that guitar, it’s just so sad when you don’t turn it up. It just wants to go. It doesn’t want to be on two, it wants to be cranked up, it wants to rock out. So it felt right.

SD: You’re often characterized as a sad songwriter and a lot of your music is melancholy. Why is it that we find sad music so cathartic?

SVE: Every since I was a kid, I was taught to let your emotions go. I was one of those kids who had a really hard time communicating. So my mom gave me a journal and I would just write when I was dealing with something difficult. Being able to compartmentalize your emotions in a way that you can take them out of yourself and put them down on paper and let it be its own thing — as a kid, it was a really simple but complex idea. And I’m still trying to understand it. But that’s where my songwriting has tended be. Whenever I’m going through something hard, I pick up my guitar and I play and sing and rant. It’s form of self-therapy. And most of the time I don’t want to share it with people because it’s me trying to understand myself and get through it. But every now and then there’s a message or an idea that I feel is universal, and I try and take that moment and turn it into a song, generalize enough that people can relate to it. I think everyone goes through hard times and not many people talk about it. I hope people learn from it and that people connect with it.

SD: The songs on the new album feel less confessional than your earlier stuff. Was that an intentional decision or just a natural evolution?

SVE: You know, I think most of my songs are still pretty confessional. But for some reason, because there’s more of a backbeat, there’s more production around them, they’re not perceived as being as confessional. I think they are more confident songs. But they’re still confessional, I think. I am trying to learn how to separate myself, to create a little bit of distance between myself and my songs, which I think can be good.

SD: Folks like Justin Vernon, Aaron Dessner and Kyp Malone have been singing your praises for a long time and have helped people learn about your music. Now that you’re becoming more well known, are there any under-the-radar artists you’re excited to tell the world about?

SVE: I really like Lady Lamb the Beekeeper. She’s got such a beautiful spirit. I just heard Angel Olsen for the first time, and I think her new record [Half Way Home] is beautiful. She’s from Chicago, and she sort of sings somewhere in between Roy Orbison, Scott Walker and Diana [May] Clark. Those are two songwriters who I think are on their way to really amazing things.

SD: Do you have any guilty musical pleasures?

SVE: I just read a really interesting article about Kylie Minogue, and I want to get back into her stuff. She writes really amazing pop songs, and in my world pop is really underrated. But she’s a pop genius.