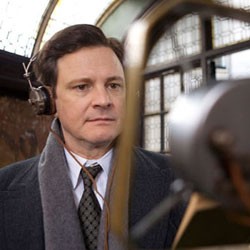 Here’s how you know Colin Firth’s performance in this movie is among the year’s very finest: He plays a figure born into almost unimaginable wealth, privilege and power (one-quarter of the human race was under British rule at the time) and succeeds at making you feel sorry for him.

Talk about bad timing. For hundreds of years, you could have been a member of the royal family and stammered. Who would have known outside an elite inner circle? But, just as Firth’s Prince Albert comes of age, a nightmare of a new phenomenon changes all that. Mass media. Suddenly, princes and kings find themselves confronted by radio microphones and newsreel cameras.

The film opens with one such occasion. It’s 1925, and King George V (Michael Gambon) has asked his stutter-stricken son to deliver an inaugural address at the British Empire Exhibition in Wembley. Director Tom Hooper tells us everything we need to know in a quick series of emotionally potent shots.

We see Firth waiting backstage with the look of a man going to the gallows. The sympathy in the eyes of his wife — played by a never-better Helena Bonham Carter — and the mortification on the faces of the attendees when the Duke of York steps up to the microphone, opens his mouth and emits noises that, amplified, sound like the strangling of many large birds.

Indefatigable in her quest to find help for her husband, the duchess seeks out Lionel Logue, a speech therapist known for his unconventional methods and impressive record of success. Geoffrey Rush does some of the most colorful work of his career in the role of the transplanted Australian who insists on holding daily sessions in his humble home office and addressing the future monarch by his family nickname, “Bertie.”

What ensues is cinema that’s consistently satisfying on several levels. It’s tremendously affecting as the story of two men forging the most unlikely of friendships. Logue defies class boundaries, asking highly personal questions in an effort to get to the root of his client’s crippling affliction and, in the process, comes to know and understand the future king as virtually no one else on Earth does.

The movie offers the pleasures of a gripping historical drama, as well. Hitler was making war more inevitable by the day. England needed a leader who projected strength and confidence. When Albert’s older brother, Edward (Guy Pearce), ascends to the throne and then, a year later, abdicates it to marry Baltimore socialite Wallis Simpson (Eve Best), the prince’s worst fear is realized. The meticulously researched script by David Seidler provides a fascinating glimpse behind the scenes at both the pomp and practical preparations attendant to such a transition.

Of course, it’s a love story, too. Never for a second is the mutual devotion between the future king and queen anything less than credible and moving. Bonham Carter steps outside her comfort zone and does the stand-by-your-man thing as endearingly as anyone ever has on screen.

More than anything, though, this is a story of personal struggle, of a wounded soul’s lifelong battle — with both his defect and his demons. Firth is nothing short of amazing. Gorgeously shot, marvelously acted, brimming with humor, warmth and wisdom, The King’s Speech isn’t merely one of the year’s best movies. It rules.