The Kids are All Right 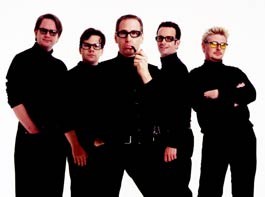 One of my coworkers has this phrase that he overuses. “As a for instance,” he says, and then goes on to give you an illuminating example. You can count on hearing that phrase a dozen times if he’s giving a speech. Sorry, Hank, but I’m using you “as a for instance” this time.

You see, Hank’s problem reminds me of a skit by The Kids in the Hall, the popular Canadian comedy troupe coming to Burlington next week. In it, a geeky worker is called in to his supervisor’s office and told that some of the other workers have been complaining about him. Their frustration stems from this employee’s overuse of the word “ascertain.” The guy just cannot complete a sentence without somehow working it in. And to see him struggle to find an alternative word, his brow quivering in the effort, well, that’s just entertainment.

It may not be your cup of tea, to be sure. If you’re offended by the thought of a comedy skit called “Hitler [blanks] a Donkey,” then avoid the show at all costs. And if you see no comedic potential in the Chicken Lady and the Bearded Lady at a strip club, then you are in a different cultural category than these guys. Fortunately for the Kids, they have plenty of company in the slightly deranged department.

Born as a live theater group in Toronto in the 1980s, Kids in the Hall — whose name derived from a recurring Jack Benny line — was “discovered” by “Saturday Night Live” producer Lorne Green. He helped them create a popular skit show that ran for years on the Canadian Broad-casting Corporation. The publicly funded network tried censoring the more offensive material but apparently gave up after a while. One skit that may have hit home for many Canadians was called “Screw you, taxpayer!” In it, the cast members demonstrated, with a chart, how tax dollars were supporting asinine comedy bolstered by insanely expensive props. How can you not love that?

Many of those props were wigs. There must have been thousands, as virtually every story involved a man dressed as a woman. Scott Thompson does a spot-on Queen Elizabeth, but can also do a fantastic redneck hockey fan. He is also gay, and loves to play the flamboyant flamer Buddy Cole, a politically incorrect lounge philosopher whose gags go right for the jugular. “I could do only one voice as a kid,” says Thompson on a documentary video. “Count Chocula.” Obviously he’s learned a few tricks since then.

On the other side of the gender equation are some of the tough guys played by Bruce McCulloch. His version of an impassioned Doors fan might remind you of the mullet head next door. “I love rock music, but I also know how stupid it is,” he notes.

What gives the Kids their edge is this odd combination of love for and blatant mockery of their characters, who are often just a touch mental. As a for instance — sorry, Hank, couldn’t resist — Mark McKinney’s best-known character is a bespectacled man who lines up people in the distance between his thumb and index finger. “I am crushing your head!” he says with glee, bringing his digits together in a clear case of cold-blooded “murder.” Of course, he meets another head crusher on the streets, and a battle ensues.

“I guess if you’re going to be funny, it’s going to be with what you grew up with,” says Kevin McDonald. “We grew up in mundane suburbia, as it were, and that’s our ‘funny.’”

While their TV show ended in 1994, The Kids in the Hall have remained active. They made a feature movie called Brain Candy in 1996, and their 2000 live tour inspired another tour this year. Dave Foley is probably the best known of the group, for his role in “News Radio” and bit parts in other TV shows like “Just Shoot Me” and “The Tick.”

Thompson also appears regularly in places as disparate as “The Weakest Link,” an Alanis Morissette video and “Politically Incorrect.” McKinney did time on SNL, the comedic equivalent of going from the New York Yankees to the Toledo Mud Hens. But that’s just my opinion.

The irreverence, wit and energy of these funny five have earned them a cult following. Which will no doubt be out in force at Memorial Auditorium next week. Sound like fun? Ascertain for yourself.

Comedy The Kids in the Hall