The Journalist and the "Mouthpiece"

Why is Vermont's Agency of Natural Resources stonewalling Seven Days? 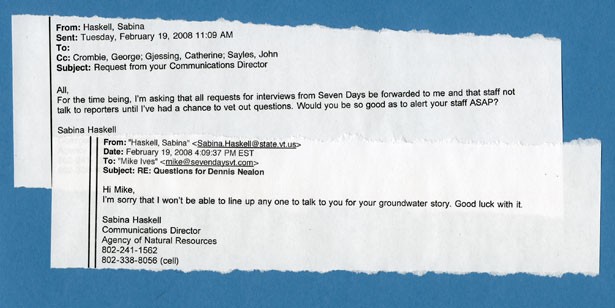 When Seven Days reporter Mike Ives began investigating the growth of Vermont's nascent bottled water industry for this week's cover story, he assumed he'd be able to interview a groundwater expert within the Agency of Natural Resources (ANR). As the primary governmental entity responsible for overseeing and protecting Vermont's groundwater, ANR is in a unique position to comment on how this vital resource is being managed and offer opinions about how well Vermont's permitting laws and enforcement procedures serve the public interest. Presumably, the agency would also be willing to shed light on the Douglas administration's position on commercial water extraction.

So, a couple weeks ago, Ives arranged an interview with a state hydrogeologist. But when the time came to conduct that interview early last week, his call was referred instead to Sabina Haskell, ANR's communications director. Contrary to the mandate of her job title, Haskell promptly shut Ives down.

Ironically, Haskell is a former editor of the Brattleboro Reformer, a former president of the Vermont Press Association and a founding board member of the Vermont Coalition for Open Government. Just last year, before joining ANR, Haskell testified on the critical importance of open and responsive government at hearings before the Vermont Legislature and the U.S. Congress, where she bemoaned the fact that Vermont ranks 38th nationally in how its laws define public records.

"A transparent and open government benefits all - residents, town officials, school administrators, lawmakers and state employees," Haskell told the Vermont Senate's Government Operations Committee. Vermont's 206-plus exemptions to the open-records law are, in Haskell's words, "appalling. This is not the Vermont way of doing business."

Apparently it is now.

While Ives, at Haskell's request, was preparing a detailed list of questions for ANR, Haskell was circulating a memo to top agency officials, including Secretary George Crombie, directing them not to speak to anyone at Seven Days without clearing it with her first. "For the time being, I'm asking that all requests for interviews with Seven Days be forwarded to me and that staff not talk to reporters until I've had a chance to vet out questions," her email read. "Would you be so good as to alert your staff ASAP?"

Several hours after Ives submitted his questions, Haskell dismissed his interview request with a perfunctory two-sentence email: "Mike, I'm sorry that I won't be able to line up anyone to talk to you for your groundwater story. Good luck with it."

It's not unusual for government flacks to ask journalists in advance of an interview what information they're seeking; in theory, it helps them line up sources and materials in order to be more helpful to the reporters. It's rare in Vermont that interviews are conducted through an official agency "mouthpiece," or that communications directors require interview questions beforehand.

It wasn't until late last week that Seven Days was told why no one at ANR was available to answer his questions. "I'm telling you," Haskell said, "it's been wild over at the legislature all week."

Later, she divulged a little more. "Twice since I've been here," she said, "we've made ourselves readily available and were told that interviews were going to go one way and the story turned out completely differently."

It should be noted that, in the last year, Seven Days has published three stories critical of ANR in general and Secretary Crombie in particular. Neither Haskell nor Crombie ever questioned the accuracy or fairness of those stories, which makes ANR's decision to deny an interview request from Vermont's largest weekly newspaper all the more puzzling.

Frankly, it's inconceivable that an agency with 625 employees couldn't find anyone willing to answer such fundamental questions as: How many bottled water companies are currently operating in Vermont? How many gallons of water are being commercially extracted from Vermont each year? How do Vermont's ground-water laws stack up to other states? And, does ANR support the proposal of a "public trust doctrine" for groundwater, similar to what other states, including Connecticut, Maine and New Hampshire, have adopted?

That's exactly the kind of information that, a year ago, Haskell said should be available to Vermonters. As she told the U.S. Senate's Judiciary Committee, journalists are increasingly frustrated by the "de facto sentiment of secrecy that seems to be seeping down to every level of government."

Apparently other Vermonters, including some lawmakers, have similar concerns when it comes to getting information from the Douglas administration. Representative Chris Pearson (P-Burlington) said he wasn't surprised by ANR's gag order on Seven Days. He believes it's a "fairly deliberate" effort on the part of the administration to keep the public in the dark. "What we're seeing is a pretty consistent pattern from this administration, which is that they're not forthcoming when we ask them for information," Pearson said. "They never seem to be organized from a customer-service point of view."

Senator Ginny Lyons (D-Chittenden), chair of the Senate Natural Resources and Energy Committee, said she's had no problems getting material from ANR. However, she added, the administration's mulish response to requests for information doesn't surprise her. "For me, it's a great concern," she said, "because the most important thing we can have in government is transparency."

Annie Noonan, executive director of the Vermont State Employees Association, said many ANR employees have told the union that the agency has clamped down on the exchange of information with the public and other stakeholders. She said the purpose of Haskell's email to agency officials was "an attempt to scare employees and keep them quiet.

"The agency has a right to determine its position on issues, and to refuse to allow confidential information to be circulated," Noonan said in an email statement to Seven Days. "However, the perception among many workers is that they'd better stick to the 'party line' and not detour from the official 'message.'"

Indeed, Haskell seems more interested in running interference for Crombie than subjecting the agency's experts to a reporter's tough questions. In her former life, Haskell might have taken issue with such a defensive posture. As she told Congress last year, "We are a country where we do the people's business. And the people have a right to know what local, state and federal officials are doing."

What a difference a year makes.