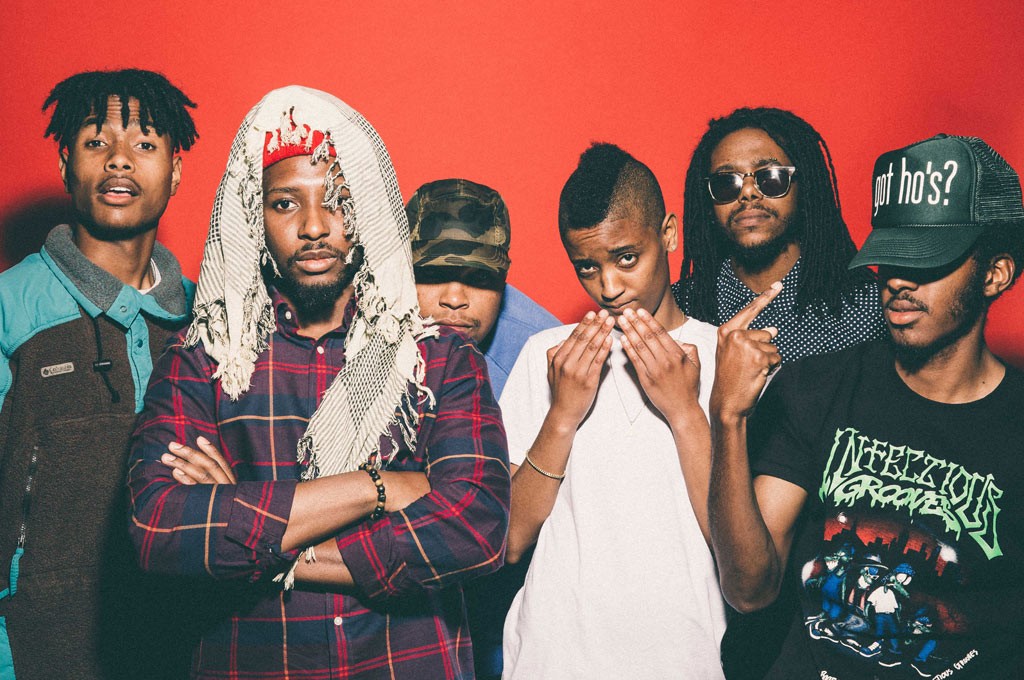 If you google "the internet," the first result that pops up is not a Wikipedia entry for the humanity-altering global communications network through which you may be reading this article. Somewhat incredibly, it's a Wiki entry for a soul band called the Internet. To borrow a notion from John Lennon, the Internet are bigger than the internet.

OK, that's a bit of an overstatement. Still, that the Los Angeles-based band currently tops online search engines is a testament to just how much recognition the group has garnered for its recently released third record, Ego Death. (If you don't believe us, just ask Jeeves.)

The Internet (the band) was founded in 2011 by DJ, vocalist and producer Syd Bennett (aka Syd tha Kyd) and producer Matthew Martin (aka Matt Martians), both of whom were members of the famed alternative hip-hop collective Odd Future. Essentially working as a duo, the Internet released a pair of full-length albums, Purple Naked Ladies (2011) and Feel Good (2013), to modest acclaim. But Ego Death, recorded with a full band and released this summer — and featuring guest turns from Janelle Monáe and Odd Future's Tyler, the Creator, among others — has proven to be a game changer.

Ego Death is centered on Bennett's smooth, emotive delivery and sly, lusty wordplay. She sings with an easy, flowing cadence that somewhat masks the emotional turbulence and heat embedded in both her tone and her lyrics. As impressive as she is, what really makes the record uniquely compelling is the array of atmospheric sounds, beats and arrangements through which Bennett lithely winds her splendidly unconventional melodies.

There's simmering warmth in the jazz- and funk-minded deployment of luxurious keyboards, serpentine bass runs and snapping drums. It nods to the fluid 1990s fusion of hip-hop and soul by bands such as Soulquarians — and former member Erykah Badu's Baduizm is an obvious and affectionately rendered influence. The strikingly creative and artistically bold album is capturing attention from VIBE magazine to the New York Times.

Seven Days spoke with Martians by phone ahead of the Internet's show at Signal Kitchen in Burlington on Saturday, September 26.

SEVEN DAYS: So you and Syd met on Myspace?

MATT MARTIANS: Yeah. I was on Myspace maybe a year or two before Syd. But she got on and was looking for a producer and reached out to me looking for advice. And we kept in touch over the years. And then we ended up being in the same place and had some of the same friends.

SD: Sticking with the internet angle for a moment, if you google "the internet," you guys are the first result that comes up. But that's a fairly recent development. Before you started to gain some notoriety, did you ever regret naming your band something so SEO-ambiguous?

MM: When we first named the band, Syd's mom — she's like my second mom — she'll come to me about stuff that she doesn't want to hurt Syd's feelings about. She came to me and was like, "Hey, I don't understand it." But now people see it and they get it. It was a challenge we accepted, but it confused people at first, for sure.

SD: You've explained the idea behind the name Ego Death, that it's about setting aside personal egos to foster creative growth. But how do you actually quiet your ego to that degree?

MM: Well, me and Syd are the leaders of the band, but everyone has an equal voice in the band. Everybody gets the same level of respect. In a lot of bands, the executive decisions are made by one or two people. But with our band, we just consider everybody's feelings, and it works really well.

MM: Yeah, man. It's a lot less stress. And that just means you're more open to ideas. Because you're working with people that you care about, and you want them to be more creative, too.

SD: Out of curiosity, do you happen to listen to Sturgill Simpson?

SD: He's a country singer who released this record called Metamodern Sounds in Country Music. It's like a psychedelic twist on traditional and outlaw country. Anyway, he has a song called "Just Let Go" that I think jives with the concept of Ego Death. The opening line is "Woke up today, decided to kill my ego."

MM: [laughs] That's tight! I'll have to check that out. Maybe he knows the answer to our album title.

SD: You said in a recent interview with VIBE that on this record you guys have finally found your sound. What specifically made you feel that way?

MM: I think it's just part of growing as an artist and being able to listen to and recognize who you really are. You listen to artists like D'Angelo and Jamiroquai, you only get those sounds from those guys. Only those guys can get it. And we feel like we finally found a specific sound that's us. We're really comfortable with all that we're doing, a sound that our fans are comfortable with. And something we can tweak a little bit on every album and grow with naturally.

SD: This was the first record you have made where Syd was single. How did that shape the writing process?

MM: It really affected everything. For one thing, she had a lot more free time. But it was another perspective, too. The other albums were a lot about being in a relationship and the mistakes you make. But this one was kind of like looking at relationships and not being apologetic about it. It is what it is. Shit happens. So that's kind of the energy of this album. It's a little more direct, saying what we really think and not shying away from that.

SD: It's been interesting to see how the careers of everyone involved with Odd Future have progressed, you two included. And it seems like your success, and that of Frank Ocean and Tyler, the Creator, has actually raised Odd Future's profile even more than when the collective was really active.

MM: The Unknown Mortal Orchestra. I've been bumping that a lot lately.

The original print version of this article was headlined "Ego Mania"