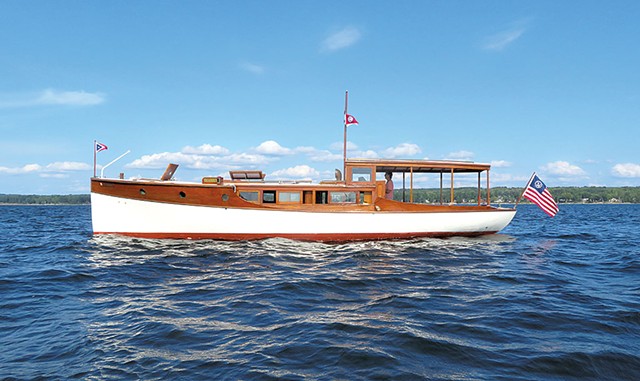 Bob Schumacher was aboard his boat Vagabond on Shelburne Bay last week and racing as fast as he could go. The boat itself wasn't going anywhere; it was lashed to the dock at the Lake Champlain Yacht Club. The 74-year-old retired canoe and kayak restorer and dealer from Hinesburg was rushing to get his craft shipshape for this weekend's International Boat Show in Burlington. He feared it wouldn't be ready in time or up to his usual standards.

"I particularly enjoy working on old wood boats," Schumacher said as we crouched inside the launch's low-ceilinged cabin, where power tools and brass fittings lay scattered on the antique wood. "It's the satisfaction of getting them done, and done right."

Vagabond had already been retrofitted with some of the latest 21st-century nautical technology. Originally built with a six-cylinder gasoline engine, the craft now runs on a modern electric motor, powered by 96 volts of batteries hidden beneath its berths. The batteries are charged by 1,400 watts of solar panels on the roof and a diesel generator when the sun isn't shining.

It's a cutting-edge drive system for a 42-foot launch that was built in 1909 for the commute between New York City and Long Island or Connecticut. But, Schumacher said, it actually wasn't unheard of for boats of that era to run on electric power; 55 electric launches were built for the 1893 World's Columbian Exposition in Chicago. It seems everything old is new again.

This week, Vermonters will get a rare opportunity to see Vagabond and more than 120 other historic, antique or classic watercraft on display on the Burlington waterfront. On Friday and Saturday, September 9 and 10, the Antique and Classic Boat Society holds its annual International Boat Show on Lake Champlain. 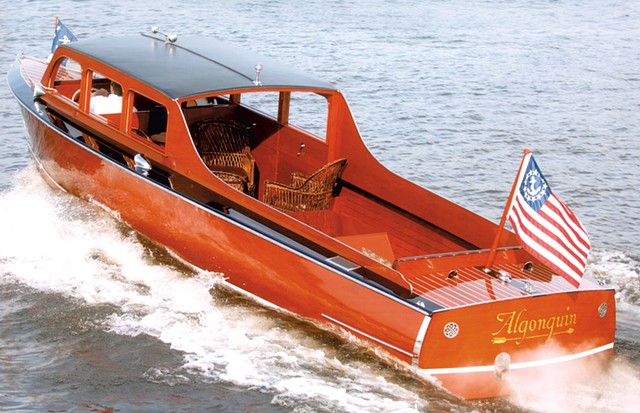 The free show, which is hosted by the Lake Champlain chapter of the ACBS, features motorboats and sailboats dating as far back as the early 20th century. The event has already brought scores of vintage vessels to town from as far away as Florida, Texas and Washington State.

Attendees will be able to board some of the vessels, particularly the larger ones, if their owners allow. Kids and adults can also sample onshore exhibits, workshops and demonstrations.

Describing a boat as "historic," "antique" or "classic" isn't a value judgment but merely a way to designate the era when it was made. For its judged competition, which will be held on Friday, the ACBS considers a boat "historic" if it was built in 1918 or earlier, "antique" if it dates from 1919 to 1942, and "classic" if it dates from 1943 to 1975.

For many owners, the appeal of these old cruisers goes beyond their function, form and beauty. They speak of an ineffable combination of attractions: the smell of the wood, the unknown histories of past owners and their travels, and the way old boats' hulls carve the water compared with those of contemporary craft.

"I love to work on those boats. It just feels so good. I can't tell you why." Susan Haigh tweet this

Susan Haigh of South Hero is president of the Lake Champlain chapter of the ACBS, which has members in Vermont and New York. Haigh said she got involved with the nonprofit organization after she inherited her family's 13-foot Lyman runabout, Ninnyfish, which was built in 1949.

Haigh also has a 16-foot Lyman yacht tender, built in 1940, which Snake Mountain Boatworks in Weybridge restored after it was found neglected in a barn for more than 20 years.* That craft was already named Susan when she bought it.

"I love to work on those boats," Haigh said. "It just feels so good. I can't tell you why."

Though Lake Champlain has one of the world's richest maritime histories, this is the first time since its founding in 1975 that the ACBS has held the International Boat Show on its waters. Originally scheduled for Burlington in 2021, the show was postponed due to the pandemic.

Burlington architect, boating enthusiast and then-ACBS chapter cochair Bill Truex was instrumental in bringing the show to Vermont; he died on April 10 before seeing the fruits of his labor. Thanks to his efforts, as Haigh pointed out, this week the public will be able to enjoy scores of old boats, including many that plied the waters of Lake Champlain for decades.

Among them are Snail and Bolo Babe, 33-foot Baby Gar racing boats. Both were built in 1926 and originally outfitted with Liberty aircraft engines that had been retrofitted for maritime use at the end of World War I.

Once renowned as "the fastest boat on Lake Champlain," Bolo Babe left a lifelong impression on Milton boating enthusiast Edward Bombard. The 80-year-old Burlington native said he was 14 or 15 years old when he and some friends went to watch Bolo Babe race a hydroplane near what is now the Lake Champlain ferry dock in Essex, N.Y.

At the time, Bombard recalled, Bolo Babe belonged to Howard Miller, who owned a Ford dealership in Vergennes. Miller had modified his racing craft with an Allison aircraft engine, which had considerably more horsepower than its previous Liberty engine.

While Bombard watched from a nearby dock, the two boats sped several laps around the buoys that marked the oval course. For much of the race, they were neck and neck. As Bombard recalled, the hydroplane was faster than the Bolo Babe on the straightaways. However, because the hydroplane skidded wide on its turns, the Bolo Babe kept using its tighter cornering to regain the lead.

Going into the final lap, the race looked like it would be a close finish, Bombard said. Knowing that the hydroplane was likely to pull ahead on the straightaway heading to the finish line, Miller made an aggressive move to preserve his lead.

"He threw the throttle forward," Bombard said, "but because there was so much torque on the engine, it flipped the boat upside down."

When the boat hit the water, the engine hatch flew open. Bolo Babe sank instantly, with Miller and his onboard mechanic, Luis Velez, going to the bottom with it.

Miller's girlfriend, who stood beside Bombard, was distraught. He estimated that it took 15 minutes for Miller to swim to the surface; another 10 minutes later, Velez emerged from the water. An air pocket below deck had enabled them to survive the wreck and free themselves.

"Of course, no one knew they were trapped in an air pocket," Bombard said. "As a teenager ... it left a pretty good impression on my mind. I thought I had watched somebody die. To have them survive that was pretty amazing."

Remarkably, Bolo Babe, which had corkscrewed into the mud at the bottom of Lake Champlain, also survived and was pulled ashore. Since restored, it will be on display this weekend, as will Bombard's own 37-foot racing sloop, Black Rose, which was built in 1929.

Another vintage sailboat that will appear at the International Boat Show is a 1926 racing boat called Ghost, one of only 28 Sound Inter Club sailboats that were ever built, mostly for racing on Long Island Sound. According to the website of Reuben Smith's Tumblehome Boatshop in Warrensburg, N.Y., only five of those original 28 sailboats are known to exist today.

Restoring and maintaining these vintage watercraft is a difficult and costly endeavor. Schumacher, Vagabond's owner, estimates that he's put more than 1,000 hours of labor into the boat since he found it in Jacksonville, Fla., in April 2020 and had it trucked to Vermont.

In addition to all the electrical modifications, he's replaced its keel and much of the planking. The previous owner found it as a "gray boat," Schumacher said, meaning it had sat neglected for so long, exposed to the elements, that the finish was gone and the wood had turned gray.

The expense of restoring these old vessels goes beyond the cost of labor, noted Schumacher, who does all the work himself. Finding replacement parts is a challenge; Vagabond's brass flagpole holder alone cost him $300. And when one of his other antique boats, a 1932 Hacker Craft, needed two new windshields, Schumacher experienced sticker shock.

Those period-appropriate details matter to the ACBS judges, who generally evaluate boats based on their authenticity, workmanship and maintenance. Boats compete as either "preserved" or "restored"; those in the former category must contain at least 60 percent of their original deck and topside materials, with any new construction using the same methods and materials as the original.

To an untrained observer, Vagabond appeared to be a stately craft. But Schumacher said he doesn't expect to take home a blue ribbon this year, nor did he seem to mind. As he put it, "I just like sailing old boats."