The Infant Formula Crisis Is Causing Stress for Vermont Families 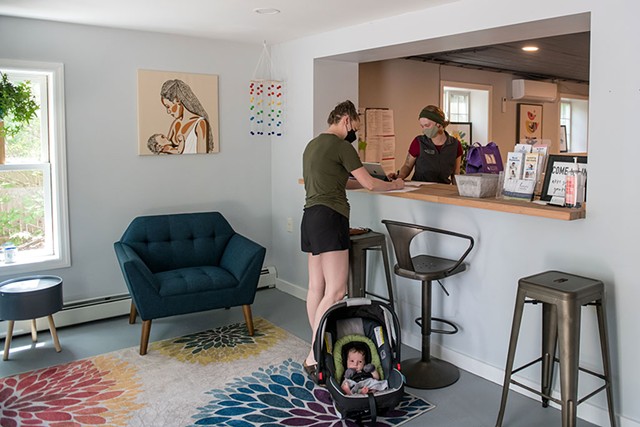 In March, Colchester resident Beth Raymond noticed it was becoming difficult to find the cans of Similac Sensitive infant formula she relied upon to feed her 6-month-old daughter.

A few weeks ago, the situation worsened. Raymond couldn't find any Similac Sensitive, forcing her to switch to the standard formulation of Similac, which her daughter's stomach didn't tolerate as well. Last week, Raymond couldn't even locate that type, so she placed an online order for a few cans of soy-based formula from Target as a backup.

"Shelves are bare," Raymond wrote in a Facebook message to Seven Days. "It's going to be completely gone soon and I'm not sure what we're going to do."

Raymond is not alone in her worries. Across the state, families who rely on formula to feed their infants are struggling to find supplies and to understand when the situation will improve.

"You're hitting moms at their biological level." Magdalene Miller tweet this

For her part, Raymond is concerned about how so many changes in formula will affect her child, now 8 months old, who seems to be eating less. Raymond is even contemplating starting her daughter on whole milk, even though that's not recommended by doctors until babies are 12 months old.

"You're hitting moms at their biological level," said Magdalene Miller, maternal child health manager for Northern Counties Health Care, which provides at-home nurse visits to pregnant women and new mothers in the Northeast Kingdom. "They need to protect and feed their babies, and babies must eat to survive, and they must eat an incredibly specific combination of things and a specific amount."

Lawmakers across the country are calling the shortage a national emergency because three-quarters of American babies rely on formula for at least part of their diet. The problem can be traced to supply chain issues and the February closure of one of the nation's largest infant formula factories after bacterial infections sickened four babies, two of whom died.

That Sturgis, Mich., factory — run by Abbott Nutrition, which makes Similac and several other common powdered formulas — remains closed, but Abbott officials announced this week that the company had reached an agreement with the U.S. Food & Drug Administration that would allow it to reopen shortly. Once that happens, though, Abbott said it will take between six and eight weeks for its products to show up on store shelves.

The closure of Abbott's Michigan facility has led other U.S. companies to try to ramp up production. But besides Abbott, there are only three major formula manufacturers: Mead Johnson, which makes Enfamil; Nestlé USA, which makes Gerber; and Perrigo, which makes store-brand formulas for companies such as Walmart, CVS, Walgreens, Target and Costco. The four producers are responsible for 90 percent of the U.S. supply of infant formula and are struggling to fill the void.

Perrigo has a production facility in Franklin County. The Georgia, Vt., plant also makes formula for San Francisco-based startup Bobbie, an organic, European-style infant formula subscription service that has had to turn away new customers in recent weeks because of a surge in demand.

In a statement emailed to Seven Days last Thursday, a Perrigo spokesperson said the company was "running at maximum capacity" and had "prioritized production of formulas and sizes that are in high demand." But in an interview with Reuters last Friday, Perrigo's CEO and president, Murray Kessler, said that despite his company's facilities running at 115 percent capacity, he expected shortages to last for the remainder of 2022.

"We have stepped up and are killing ourselves to do everything we can," Kessler told Reuters.

In December 2020, the St. Albans Messenger reported that the company had plans to expand its Vermont plant, but a Georgia zoning official told Seven Days last week that Perrigo had not yet applied for any building permits.

The U.S. House Committee on Oversight and Reform sent letters on Friday to Perrigo, Abbott, Mead Johnson and Nestlé USA requesting more information by May 26 about when they became aware of the formula shortage and the steps they've taken to increase production. The Biden administration also has announced plans to import formula from countries that have an excess supply, though it's unclear when that will begin.

The uncertain timeline concerns those in Vermont who work with moms and babies. Miller said nurses at her agency saw an uptick in calls last week from families worried about not being able to find the brand of formula they are accustomed to — or, in some cases, substitute brands, either. Some of the families Miller works with in rural areas have had to travel long distances to find the formula they need, which she says is "not sustainable." Miller has seen an increase in posts on Caledonia County's Buy Nothing Facebook group, with people listing or seeking cans of formula.

Further complicating the matter for Raymond, the Colchester mother, and many other Northeast Kingdom families Miller serves: Like thousands of low-income families in Vermont, they purchase formula through the U.S. Department of Agriculture's Special Supplemental Nutrition Program for Women, Infants and Children, commonly known as WIC. More than half of the infant formula in the country is purchased by WIC recipients, who are only allowed to buy it at authorized stores. In Vermont, 108 grocery stores accept WIC payments, according the state's WIC program director, Karen Flynn. So when Raymond finds formula in stock at another store, she has to pay full price — usually $30 to $40 for a 30-ounce can of powder, which lasts around five to eight days.

Flynn said staff in the 12 Vermont Department of Health regional offices have been working with families and vendors to try to improve access to formula. That means reaching out to WIC-authorized grocery stores to get a better gauge of available supplies and — since women sometimes supplement breastfeeding with formula — providing lactation support for mothers trying to increase the amount of milk they produce.

To keep costs down, WIC is required by federal regulation to contract with an infant formula maker, Flynn said. Vermont, like the majority of states, has a contract with Abbott. But since the Michigan factory shutdown, Vermont's WIC program has also made use of waivers offered by the USDA, allowing recipients more flexibility in the brands and sizes of formula they can purchase.

Supply chain issues have been a challenge since the pandemic began, but the formula shortage feels like "another level of difficulty," Flynn said.

Some parents have found work-arounds. Although the FDA does not allow European infant formula to be sold in the United States, Nycole Bubenko of Fairfax started ordering German formula on a third-party website in 2015 after not being able to produce enough milk to feed her first child and learning that most of the U.S.-made formulas were manufactured with corn syrup. The organic German formula was made with higher-quality ingredients and was gentler on her son's stomach, Bubenko said. Now a mother of three, including a newborn, Bubenko has continued to order the German formula online. She says it's comparable in cost to U.S.-made formula when bought in bulk and arrives in less than a week. As of last week, she'd been able to obtain it without any trouble.

"There is another option, and it isn't as out of reach as people may think," Bubenko said.

But the American Academy of Pediatrics cautions against importing formula from overseas because it is not subject to FDA regulations. Dr. Meghan Gunn, chief of pediatrics at Southwestern Vermont Medical Center in Bennington, supports that position.

"In terms of their composition, they don't necessarily meet U.S. requirements, but they are probably safe," Gunn said. "I think we need the FDA to be involved in that importation before I feel comfortable recommending it."

Gunn said parents who are struggling to find their usual formula brand should call their pediatrician for advice.

"There are so many formulas, it's very confusing — even for us, sometimes — to keep track," Gunn said. "I think, for most kiddos, there are [generic] alternatives that ... hopefully can be found."

Doctors can also help families track down alternative types of formula for babies with more specialized dietary needs, a process Gunn said sometimes takes "a little trial and error." Gunn cautions against using expired formula or a can that's been opened by another person. It's also dangerous to water down formula to make it last longer or concoct homemade formula.

"There is way too much risk for ... not getting enough of the nutrients, for contamination with bacteria," she said.

The Vermont Donor Milk Center in Essex Junction is another resource. Launched in January 2020, the nonprofit's mission is to provide human breast milk, donated by women in the community and then pasteurized, to infants in need. Typically, families must get a prescription from a pediatrician in order to purchase donor milk. But in light of the current shortage, the center has started waiving that requirement for the first 40 ounces of milk dispensed. For the short-term, the center is also offering subsidized milk for eligible families, thanks in part to a recent $50,000 allocation from the state legislature.

Though Vermont has one of the highest initial breastfeeding rates in the country — 90.2 percent, according to the Centers for Disease Control and Prevention's 2020 Breastfeeding Report Card — the rate drops off precipitously as infants grow older because of factors including limited breastfeeding support in the community and mothers returning to work, according to Amy Wenger, a maternal and child health nurse who is co-executive director of the donor milk center. By 6 months of age, just 36.8 percent of babies in Vermont are exclusively breastfed.

Wenger said she's received a flurry of calls in the past few weeks from lactation consultants and medical providers looking for supplemental milk, as well as from new and expecting parents trying to make a backup plan in case breastfeeding doesn't work out.

"It's already been two and a half years of a lot of anxieties for families, and they are struggling already," she said. "And then to have this on top of it, this is very rough."

The original print version of this article was headlined "Feeding Anxiety"