The Inexact Science of Weather Forecasting 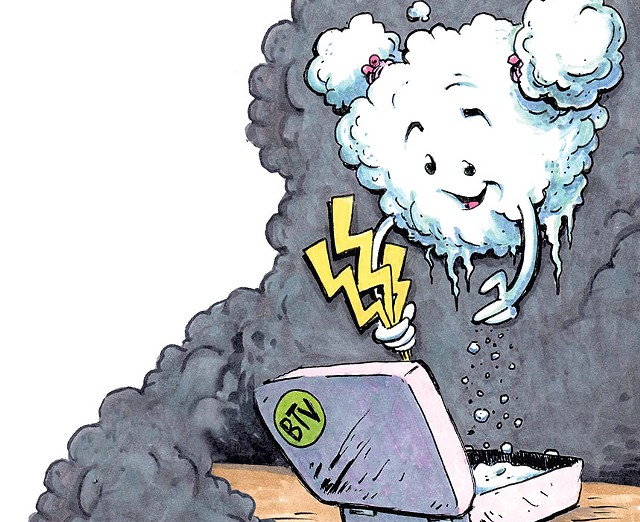 When Mike Wing predicts seasonal snowfall amounts, he pays no attention to the North Atlantic Oscillation, the likelihood of a weak La Niña, or the increasingly sophisticated computer modeling of the National Weather Service and other long-range forecasters. Instead, Wing, who runs the snowmaking operation at Sugarbush Resort, looks at the height of hornets' nests.

This fall, he says, "I've seen some as high as 14 feet off the ground. Other years, they've been as low as three feet." A greater height could presage a particularly snowy winter, Wing suggests, because hornets want to prevent their queen's eggs from being smothered.

How can hornets calculate snow depth far in advance of the first flake's fall? "I don't know," Wing responds with a laugh. "I'm just saying."

Farmers' Almanac echoes the hornets' buzz. First published in 1818, the periodical predicts an exceptionally snowy winter for New England in its 2017 edition.

"It's good fun," WCAX-TV meteorologist Nick Borelli says of the compendium's apocryphal claim. "But there's no basis for it at all."

Borelli and the rest of the Channel 3 weather crew don't put much faith in computer-generated long-range forecasts, either. "It's such an inexact science," Borelli says.

The National Weather Service makes deep dives into oceans of data to come up with seasonal temperature and precipitation projections for regions of the United States. Gaps in those data mean that "errors get amplified," Borelli points out.

Still, months-ahead forecasts formulated by teams of heavily credentialed researchers aren't mere guesswork. The federal government's meteorology agency predicted last year that, owing to the El Niño effect, the northeastern U.S. winter was likely to be warmer and drier than normal. Which, to the chagrin of Vermont ski resorts and their customers, was exactly how it turned out.

For this winter, Borelli says, "there's no clear signal" on which to base New England snowfall predictions.

The National Oceanic and Atmospheric Administration, the weather service's parent agency, reports that a La Niña phenomenon has gotten under way. This cooling of surface temperatures in the eastern Pacific — the opposite of what happens in El Niño — can result in above-average precipitation in the northern tier of states.

NOAA expects the current iteration of La Niña to be weak and short-lived, but skiers and riders shouldn't make frowny faces just yet. The weather service has revised its assessment of La Niña three times in the past seven months. And other powerful atmospheric forces — the North Atlantic Oscillation, for example — can affect Vermont's snowfall independently of what's happening off the coast of Chile.

Factoring in all the available data, NOAA offers a 50-50 long-range outlook for New England. It might be snowier and colder than usual during the next three months ... or it might be drier and warmer.

The Weather Channel, which has developed its own computer modeling, comes to a conclusion similar to NOAA's. "For the Northeast," says Weather Channel meteorologist Dan Leonard, "we feel that the winter will be a changeable one with periods of cold intermixed with periods of warmth. In the end, we expect temps to average out close to normal."

"Precipitation," Leonard adds in an email, "is much harder, if not impossible, to predict correctly." A single big snowstorm can push a seasonal forecast off its mark, he notes. "Having said that," Leonard continues, "there is some evidence to suggest a drier-than-normal winter for the Northeast, thanks to a persistent northwesterly flow."

Another bummer of a winter, then, for all of Vermont's snow lovers?

Steady winds from the northwest, the Weather Channel weatherman cautions, "could favor the typical west-facing, up-slope mountains with more snow than normal even if storms are weaker/fewer than normal." So cross-country skiers might find lots to love in Underhill State Park and similarly situated play places.

When long-range forecasts do call for northern New England to be buried by blizzards, "we get all excited," says Sugarbush owner Win Smith. "But realistically, no, we don't put a lot of faith in those forecasts."

Killington spokesman Michael Joseph says that his resort's decision makers "keep the far outlook in the back of our minds, but snowmaking planning is based on much shorter-range forecasts."

A meteorologist who studied at Lyndon State College, Vazzano is the go-to guy for a dozen ski resorts in Vermont, as well as a few more in New Hampshire and Maine. He's been providing the statistical bases for snowmaking choices for 40 years through his forecasting company, North Winds Weather.

"Some of the long-range stuff is getting better," Vazzano allows. And, he suggests, it's safe to predict this winter will be snowier than last, simply because the 2015-16 winter was such a bear. "It's almost a given that this year will be better," Vazzano reasons.

But prophesying entire seasons is not where it's at for his one-man operation based in Sandwich, N.H. "I'm big on what will happen the next five days, and especially the next 48 hours," Vazzano says.

He bases these short-term forecasts on temperature, humidity and wind readings from monitoring devices at the top, bottom and middle of ski mountains. Those data, combined with inputs from the National Weather Service, enable Vazzano to make predictions specific to resorts and to their topographical gradations. It takes a few hours to gear up the snowmaking apparatus, so Killington, Sugarbush and almost all the other big ski areas in Vermont rely on Vazzano in deciding whether, when and where to fire their guns.

"We make our entire snow plan based on what he says," Sugarbush's Smith reports.

While of great value to Vermont's ski industry, Vazzano's short-term forecasts are "not perfect," notes John Hammond, vice president for mountain operations at Sugarbush. But they're reliable enough, he adds, to allow his resort "to make more accurate business decisions" regarding snowmaking, which is a costly undertaking. "Tony presents a forecast with three-hour increments by elevation that enables us to be pro-active rather than reactive," Hammond says.

Vazzano's own business rests, accordingly, on the accuracy of his snowmaking forecasts. "It's above average," he says. "There's a lot of competition in this field, and the resorts keep using my service year after year."

On balance, then, the long-range forecasts for the coming snow year are iffy. But the bigger-picture predictions are grim, with a high degree of certainty.

According to all reputable climate chroniclers, the past month was the third-hottest October on record for the lower 48 states as a whole. Some 7,000 warmth records were set in localities around the country, compared with 508 record-cold readings for particular days of the month.

That heat-up continues an alarming trend long under way in the U.S. and most of the world. The United Nations' World Meteorological Organization said last week that a detailed analysis of global climate shows 2011 to 2015 to be the hottest five-year period since the start of reliable worldwide temperature measurements in the late 19th century. There's every indication that 2016 will lengthen this climb, the UN continued.

Sea levels are rising, glaciers are retreating and snow cover throughout the northern hemisphere is shrinking. Also, Donald Trump just got elected president of the world's second-biggest (after China) source of carbon pollution. To climatologists, that's not a good sign.

So when it comes to Mad River Glen and all the other Vermont resorts, the best advice is to ski them while you can.