The Images, Be There 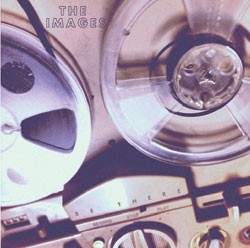 There may well be a free-spirited “dream of the ’90s” floating around the Pacific Northwest’s frequently stereotyped ether. (Are people still referencing “Portlandia”? I hope not…) But it ain’t got nuthin’ on the dream of the ’90s that pollutes Boston’s discontented air. It is within this dream that the debut album from the Images, Be There, resides.

Fronted by former Vermont resident Peter Schluter, the Massachusetts-based Images deliver sometimes surfy, sometimes bluesy, pretty much always punky rock and roll. Try to imagine a 1990s gem — say, Supergrass or maybe even Oasis — jumping the pond and setting up shop in Boston. Or, a growling Ed Kowalczyk (formerly of Live) fronting a pissy, speedy Gin Blossoms. It would sound pretty badass. And it does.

What sets the Images apart from your typical punk-ish, genre-jumping rock quartet is the focus and care with which they craft their songs. It’s apparent from album opener “Stranger” that the band isn’t content to simply turn up their amps and call it “rock or whatever.” The arrangement here, complete with intertwining guitar lines, overdriven bass, tight vocal harmonies and sudden stops, commands attention. What could be easy and simple — straight punk — is explored and expanded with maturity and taste from the start, and consistently throughout the album.

“Best of Me” is perhaps the most ’90s-vibed track on Be There. The lyrics are straight-to-the-gut simple: “I won’t let you get the best of me / Like you always do when it’s all on me.” The guitar guides the catchy melody along, and the drumrolling slow build tucked into the middle pulls you in with the clear intention of pushing you right back out. It’s still rock and roll, after all.

Be There closer “Top of the Hill” boasts a seriously funky, (I hesitate to say) Red Hot Chili Peppers-style bass line and lead guitar. While the effect of this funk is startling and mostly off-putting, the Images don’t stick with it for long. The song breaks down into a spaced-out meditation, comes back for a guitar solo or two and then slips effortlessly back into space.

The Images may want to give the impression they’re capable of harnessing multiple ideas and sounds within a single song or album. And Be There suggests they kinda can.

The band plays Citizen Cider at Fort Ethan Allen in Colchester this Friday, June 1. Be There is available at theimages.bandcamp.com.