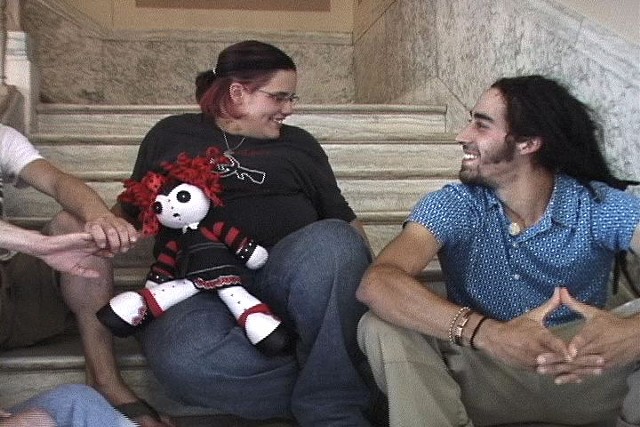 The Identity Project is a show of photographs and oral history interviews on display throughout June at the Metro Gallery in Burlington's City Hall.  The artwork was created by homeless and at-risk youth and gives the community a rare glimpse into their world.

Spectrum Health and Family Services and the Community Health Center of Burlington joined forces to bring you this exhibit.  Both organizations provide a sense of family, security and support to youth who often have no where else to turn.

Sammie, one of the artists, has been on the street since he was 15 yrs old and is not sure what may have become of him without the food, shelter, clothes, and friendship that Spectrum has to offer.

Another artist named Lizzy lives at home but goes to Spectrum One Stop regularly to see her friends and people she can relate to.

Sometimes it is hard for people to believe homelessness exists in Vermont and harder still to accept that young people live on the streets.  They are often hungry, cold and desperate for a routine and something to channel their energies towards.  Spectrum provides them with all these things.

More than anything, Sammie and Lizzy just want to be seen and accepted for who they are, instead of being treated like invisible outcasts.  They are tired of being ignored, brushed aside, stereotyped and misunderstood.  Bringing their voices and their artwork to City Hall is a step toward being heard and exposing their identities to the public.

Lizzy carries a doll named "Jaded Jenny" around with her everywhere she goes.  She says that Jenny gets a lot of stares and this is a good thing because, "It gets [Lizzy] noticed.  Makes [her] stand out..."

The Identity Project is in its third year bringing these artists' voices, talents and personalities into the public spotlight.  Brian Plisko from Spectrum and Colleen Dwyer from CHCB are the main organizers of the co-sponsored event.

The Identity Project is up at Metro Hall through June 29.  There is an opening reception this Thursday, June 21st from 4-7pm.  You can meet the artists and the staff and find out more about what you can do to help.

So the next time you walk by Spectrum One Stop on Pearl St, try making some eye contact or stopping to say hello.

According to Lizzy, they are loud and boisterous at times simply to get people to SEE them.  And if you see Lizzy and Jenny or Sammie, why not talk to them about their art show in City Hall.

Music is The Breaking In off their album Darkness Has Taken Hold Again.  The song is "Dark Winter."  You can catch The Breaking In playing at Club Metronome on June 29th with The Jazz Guys.  Also, they are releasing a new album!

And dearly departed Casey Rae Hunter's, AKA The Contrarian's, song "Soft Rock One" off his Soft Rock album.  Miss you and Brooke!