'The Hunt' Offers On-Target Satire for a Partisan Time 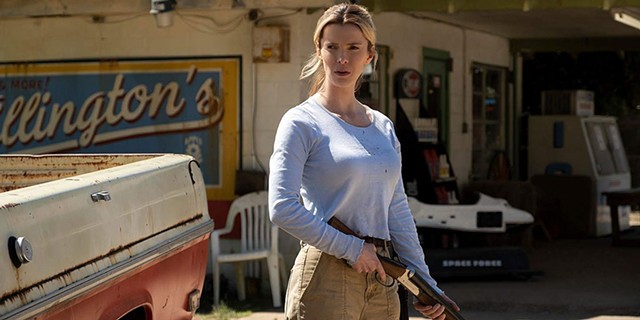 After last summer's mass shootings in Dayton and El Paso, the idea of selling tickets to a movie about gunning down people for sport raised enough eyebrows for Universal to postpone the release of The Hunt to a less fraught weekend. So here we are, in the midst of a global pandemic and finally getting a look at the latest from Craig Zobel (Compliance). You know what? The timing actually works. Given what's going on in the world, who isn't up for an hour and a half of absorbingly inventive, distractingly deranged film fun?

The big surprise when it comes to The Hunt is just that. It really is a ton of fun. And unexpectedly clever. That wasn't the advance word on this thing. Appropriately enough, one of the movie's messages is, "Don't believe everything you read."

In retrospect, we should've known this wouldn't blow. It's the brainchild of Damon Lindelof and Nick Cuse, whose CV includes "Lost," "The Leftovers" and "Watchmen." In the producer's chair is Jason Blum, who just gave us that whip-smart twist on The Invisible Man. Should it come as a shock that he was able to do the same with The Most Dangerous Game (1932, based on the 1924 short story)?

Betty Gilpin is a revelation as the film's principal character, Crystal. The script is so rigged with narrative trapdoors and fun-house mirrors that nearly 30 minutes elapse before the audience even realizes her key place in the scheme of things. Lindelof and Cuse play on our expectations with the mastery of virtuosi.

In an opening scene, for example, a group of strangers awake in a field and find themselves taking fire. Presented with a selection of readily identifiable action-thriller types (the rugged hero and the damsel in distress who proceed to meet cute, etc.), we think we know how things will unfold. And then things unfold as unpredictably as one can imagine.

Eventually, it comes to our attention that Crystal and her fellow survivors are either from the South or the heartland, what are often labeled "red-state types." And the folks doing the shooting are blue staters, liberal elites. (The picture's original title was Red State vs. Blue State.) Cagily, the screenwriters play out a parable about our divided culture in which one side so often attacks the other on the basis of media disinformation, conspiracy theories and Twitter innuendo. I do not kid in the least when I report that The Hunt is to contemporary politics what Get Out was to race relations. It's that bracing and that bright.

Gilpin's character is a seriously impressive creation. Unlike virtually everybody around her, Crystal doesn't process developments through the filter of her social media feed. She's a veteran of tours in Afghanistan, and experience has laser-focused her. At one point, another human target asks whether Crystal believes the online rumor about "Manorgate," which is said to involve wealthy, heavily armed predators stalking working-class prey. "Someone's trying to kill me," Crystal answers. "I don't care why."

We find out all about Manorgate eventually (it supposedly takes place in Vermont!). The filmmakers save their most flipped-out twist for the end, and it's a pip. Movie critic law prohibits saying more. Except that Hillary Clinton probably won't give The Hunt a thumbs-up, since the victims are cheekily referred to as "deplorables." Just about anyone else is likely to leave the theater concluding that Zobel's darkly comic satire almost never misses its mark.

The original print version of this article was headlined "The Hunt"