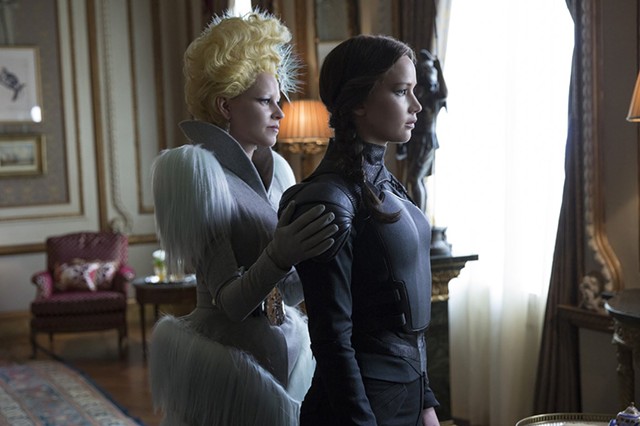 The Hunger Games is probably the least idealistic of YA franchises. Having lured her readers in with exciting scenarios that suggest life-size video game play, author Suzanne Collins turned around and used the final book in her series to drive home the point that real war is a game without victors. Mockingjay is a lengthy demonstration packed with more grief and soul searching than fun, to some readers' dismay. As two movies, it feels even longer. Yet it's hard not to admire the chutzpah of a heroic epic that debunks everything about heroes and epics.

While the second cinematic Mockingjay installment offers more action than the first, director Francis Lawrence still struggles to find a consistently satisfying dramatic shape for the sometimes-ungainly material. In Mockingjay — Part 1, Katniss Everdeen (Jennifer Lawrence) learned she wasn't alone in her fight against the oppressive Capitol. But ice-cold resistance leader Alma Coin (Julianne Moore) has her own plans for the teenage Hunger Games victor as a figurehead, the photogenic star of rebellious propaganda videos.

Early scenes play out like a hushed chamber drama in tight, murky spaces, as Katniss clashes with Coin and realizes that her leader may actually be plotting her convenient martyrdom. Moore fiercely clenches her jaw like Hillary Clinton, while digital magic enables the late Philip Seymour Hoffman to lurk benignly (but mostly wordlessly) in the background.

The movie gains color and scope when Katniss joins an elite squad on a mission to the partially bombed Capitol. While that city never feels particularly lived-in, it's interesting to look at: The cold white surfaces and tacky pop-art interiors evoke dystopian predecessors such as Logan's Run. They match a series that has more in common with talky, analog futuristic fare than with today's animated action spectacles. One scene, in which both sides believe Katniss to be dead and hastily spin the news in their TV broadcasts, even has an antic '60s-satire feel.

The action junkies eventually get their due with an extended sequence set in the Capitol sewers; it's creepy, but the eventual mayhem is hard to sort out. Indeed, a newcomer to the series will probably be confounded by the parade of characters that appears in the film only to deliver a few portentous lines and meet a nasty end.

A more efficient adaptation might have cut some of those characters — or found a stronger arc for ones like Katniss' perpetual potential love interest (Josh Hutcherson), who increasingly feels like an albatross around her neck. But the days when filmmakers could rewrite current best sellers with impunity are long gone; readers expect to see the author's vision intact on the screen. (Older childhood favorites like The Giver, by contrast, still get reshaped by Hollywood to meet current dystopian norms.)

On the upside, that textual fidelity means that Lawrence and co. couldn't soften Collins' expectation-subverting climax. Rushed in the novel, the final clash with the Capitol has similar problems in the film. While the sequence still delivers a gut punch, it's tempting to imagine what a director of combat sequences like Spielberg could have done with it, delicately balancing the brutality and the sentimentality.

The final scenes of the Hunger Games series stand out on the blockbuster landscape for their repudiation of triumphalism in any form. If anyone wins here, it's Lawrence, who's stayed committed to the role despite the unlikelihood that it will gain her any awards.

While some YA series celebrate showing those dumb adults where they can shove their pesky systems and rules, Collins doesn't seem optimistic about power, whether wielded by the seasoned and wrinkled or the young and dewy. That ambivalence may not make for an especially pulse-pounding finale, but in the world of Hollywood series and franchises, it's welcome.