The Hub on the Hill Supports a Farming Community in Essex, N.Y.

Summertime is nonstop for farmers. Whether they're planting, weeding, watering, harvesting, feeding animals, fixing fences or making hay, it's prime time, and the days are long and full. Eking out every productive moment is essential in a season that only lasts a few months. But the reality of farming is that it takes more than this work, or even this season, to make the business sustainable.

In agrarian Essex, N.Y., across Lake Champlain from Charlotte, the Hub on the Hill is working to alleviate the time pressures on farmers while strengthening the community and local economy year-round. Founded by Jori and Andy Wekin and Steve Blood, the nonprofit is both a physical space — with a commercial kitchen, storage facilities and a self-serve market — and a network of information and support for farmers and business owners.

The Wekins moved to Essex 10 years ago to manage a small farm. The area's agricultural history drew them, and it was a place where they could raise their two young boys close to the land.

Starting a community resource was always at the back of Jori Wekin's mind, she said, and as she got to know other farmers, the form of that endeavor became crystal clear. "I immediately saw the need for a commercial kitchen in the area," she said, "and I wanted it to be community-based." 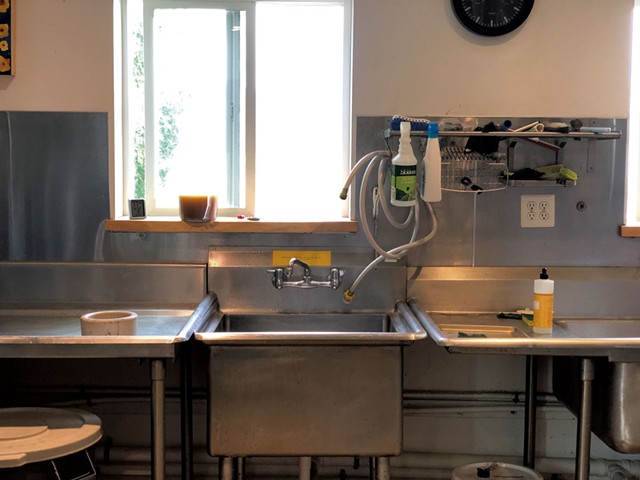 Commercial kitchens play an important role in the processing of value-added agricultural products. They provide the equipment and physical facilities to preserve summer's peak produce, letting farmers — and consumers — enjoy local food year-round. They also reduce the overhead costs for individual producers, from buying ovens and refrigerators to dealing with the inspections necessary to operate such a space.

Wekin initially got involved in an effort to renovate the kitchen at the Whallonsburg Grange Hall, also in Essex, aimed at bringing it up to the state's standards for certified commercial use. "We started a couple of projects out of the kitchen there, but we quickly outgrew it," she said.

At the same time, her husband and Blood were looking for a space to design and build stationary bicycle-powered machines for a separate business venture, Pedal Power. The three approached the owner of a warehouse-type building perched on the hill at the intersection of Middle Road and New York State Route 22. The building had been the town's hardware store, then a tractor repair shop in the 1980s. Most recently, it was an underutilized self-storage facility.

"We reached out and said, 'Hey, could we rent some space to make these machines?'" said Wekin. "And the owner said, 'No, but I'm interested in selling it.'" While the building's shop was perfect for Pedal Power, its vast footprint and location, surrounded by farms and only about a mile and a half from the Essex ferry dock, also made it ideal for bringing Wekin's community-based food venture to life.

The Hub on the Hill opened in 2016 with a spacious, fully equipped commercial kitchen, packaging facilities, cold and dry storage, office space, and a market. It has been home base for both new and existing businesses, including caterers, farmers and processors making value-added products, and a food truck that was built in the space. 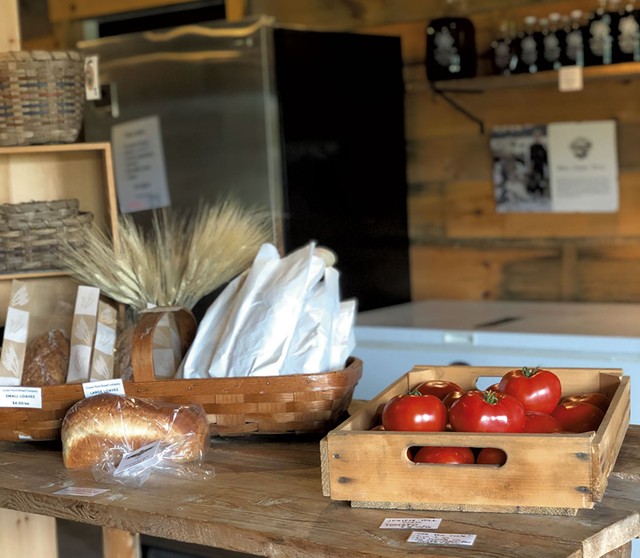 "Our main goal originally was to get the facility in place and operational to a point where people could see what we're doing here," said Wekin, the nonprofit's director.

Now that the word is out, the Hub on the Hill works with more than 50 local businesses that pay to rent space, with a range of costs for kitchen use and storage. They include vegetable, meat, dairy and diversified farms operating on anywhere from 15 to 500 acres; CSAs; and even local libraries.

One of those businesses is Farmstead Catering, based on Echo Farm in Essex. Owner, farmer and chef Dillon Klepetar credits the Hub on the Hill with helping his business get off the ground. "There's no way we could have catered our first wedding, or our first 30 weddings, without having that space available to us," he said.

The commercial kitchen is set up to be a flexible shared space. Producers work side by side, sharing the gleaming stainless steel equipment, stories and ideas. "It's definitely a dance," Wekin said as she slid past a group folding the edges of 300 hand pies destined for an event down the road. The atmosphere buzzed as loudly as the stand mixers, and Wekin acknowledged the energy in the room. "It makes your day," she said. 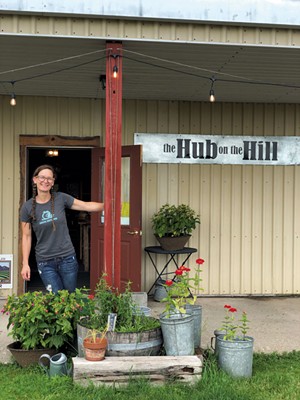 A primary goal of the Hub on the Hill is to make processing easier, reducing the number of hoops that people have to jump through to turn produce into value-added products such as pickles, jams and frozen meals. Producers can leave the work to the hub's in-house co-packing arm, Dak & Dill, or rent their own space in the facility for processing, packaging and storage.

"It's a lot of work to start a business, so we're helping that process go a little smoother," Wekin said. "We want it to be easy to get people excited about buying local food and boosting our local economy."

While Vermont has a growing number of food hubs, such as the Mad River Valley Food Hub in Waitsfield and the Vermont Food Venture Center in Hardwick, they are rare in the Adirondack region. The closest is located 160 miles west in Watertown: North Star Food Hub is a regional initiative that serves farmers in Jefferson, Lewis, Oswego and St. Lawrence counties.

According to Klepetar, the work of Wekin and the team at the Hub on the Hill eliminates the bottlenecks that farmers face in the local food system. "They're thinking about logistics and finding markets and, without someone doing that, it would just be chaos," he said.

The Hub on the Hill's self-serve market is part general store, part farmstand and part meeting place, selling goods produced in-house and produce from area farms. Seven days a week, customers can stop in to pick up baked goods for breakfast, a quick prepared meal for lunch or farm-fresh ingredients to cook for dinner. The self-service model keeps overhead costs low, and the instructions are pretty simple: Step 1, shop. Step 2, record what you're buying on the market sheets by the window. Step 3, tally the total and put your money in the cash box.

The market brings people to see what's going on at the hub, whether they live in the area or are just stopping by on their way to the ferry. It also makes it easy for them to access the local bounty, which is one of Wekin's main goals. "People can go to Burlington and shop, or Plattsburgh, or Albany," she said. "But we have such great land here, and our farmers are producing the best food — maybe on Earth!"

Value-added products — such as Dak & Dill Dilly Scapes and Small Town Cultures Apple Sauerkraut — capture that food in its peak season. In the Adirondacks' brief growing season, turning fresh produce into krauts, sauces and other shelf-stable products gives producers something to sell year-round and helps the businesses sustain themselves.

Klepetar gives a concrete example of how the Hub on the Hill relieves the stress of trying to guess what consumers will buy. "If I plant 10 acres of broccoli and only sell three, the consumer has to cover the cost of that waste," he said. "With the processing available [at the Hub on the Hill], they'll take that surplus and turn it into broccoli soup, which means it isn't wasted, and I can keep the cost down."

The storage space at the Hub on the Hill plays a big role. "Storing or freezing produce in the summer lets us wait to process it until the depths of winter, when the time is different, the pressures are different, and it's not 100 degrees in the kitchen," said Wekin, laughing.

Wekin hopes the Hub on the Hill can help producers address the challenges that come with running a business in a rural area, whether they're looking to expand their market, access capital, determine the scale of their business or find reliable labor. The collaborative environment is a hub in both the physical and social senses of the word — a centerpiece of Essex's agricultural landscape and a gathering place for the community.

The model continues to adapt, even now, in its fourth year. The Hub on the Hill recently added a delivery service, bringing its farmers' and producers' products to restaurants, markets, schools and households throughout the Adirondack Park. With these spokes in place, the Hub on the Hill is certainly on a roll.

The original print version of this article was headlined "Re-Creating the Wheel | In Essex, N.Y., the Hub on the Hill supports a farming community"