Republican Gov. Phil Scott has broken with the Trump administration to support climate goals set in the international Paris Agreement. In his January 22 budget address, he proposed dedicating 25 percent of future budget surpluses to climate action. He has called for speeding the transition to electric vehicles, weatherizing more homes and modernizing the state's electric grid.

Too little, too late, say his critics in the legislature and Vermonters most worried about the warming planet.

The climate crisis is so dire — and the state has made so little progress toward its carbon-reduction goals — that more sweeping action is urgently needed, those critics say. So they've turned up the heat and promise more as the 2020 election approaches.

Climate protesters interrupted Scott's January 9 State of the State address, yelling, "I'm here because I'm afraid I'm going to die!" in unison before being ejected by police from the House chamber.

More than 100 workers representing 30 businesses, including iconic Vermont brands such as Ben & Jerry's and Burton, kept up the pressure last week in a flurry of meetings with lawmakers.

"You cannot live a healthy life on a sick planet, and you cannot run a healthy business on a sick planet," Kate Ogden, of Burlington-based green home products company Seventh Generation, said at a Statehouse news conference kicking off those meetings.

"If Gov. Scott does in fact support Vermont's own climate commitments, as he says he does, it is time to show it," Paul Burns, executive director of the Vermont Public Interest Research Group, declared. "It's time for him to lead, follow or get out of the way of legislators who are proposing real solutions this year."

Scott talks a good game on climate, but his actions don't match his rhetoric and won't enable the state to meet goals outlined in the Paris Agreement on climate change, Burns and other critics say.

"Promising money that may or may not come in the future is not treating this like the crisis that it is," Rep. Sarah Copeland Hanzas (D-Bradford), cochair of the Vermont Climate Caucus, said of Scott's pledge of future budget surpluses.

The caucus is leading legislative efforts to accelerate climate-protecting actions in the state. Members are pushing for Vermont to join the regional Transportation & Climate Initiative, which would require wholesale fuel dealers to make payments that participating states would invest in greener transportation. Members have also introduced bills including the Global Warming Solutions Act, which would allow private citizens to sue the state if it misses its emissions reduction goals; a measure allowing the Efficiency Vermont utility to invest in heating and transportation efficiency; and a bill setting a goal of 100 percent renewable electric energy by 2030.

But Scott's supporters say the "bold" leadership that activists claim is lacking ignores the state's limited finances and other urgent, competing concerns.

She disputed the notion that committing 25 percent of future budget surpluses to climate action was not a significant proposal, noting that last year it would have generated $10 million for climate measures, which she called "huge."

But climate activists say they are motivated in part by worry that the state — which has missed past greenhouse gas reduction goals — is not on track to meet upcoming mile markers.

The first is the target set in the Paris Agreement, which calls for a 26 percent reduction in greenhouse gas emissions from 2005 levels by 2025. In 2016, Vermont's emissions were only 5 percent below 2005 levels, according to the state's most current assessment.

The second goal, enshrined in the state's 2016 Comprehensive Energy Plan, calls for a 40 percent reduction in energy emissions below 1990 levels by 2030. In 2016, the state emissions were 13 percent above 1990 levels.

Both are crucial targets, but the Paris goal tends to have an outsize influence on the debate, said Jared Duval, executive director of the Energy Action Network, a group that tracks state progress on emissions targets.

"Paris is the least ambitious of all the climate goals Vermont has, but it dominates the conversation because it's the nearest to us in time," Duval said. 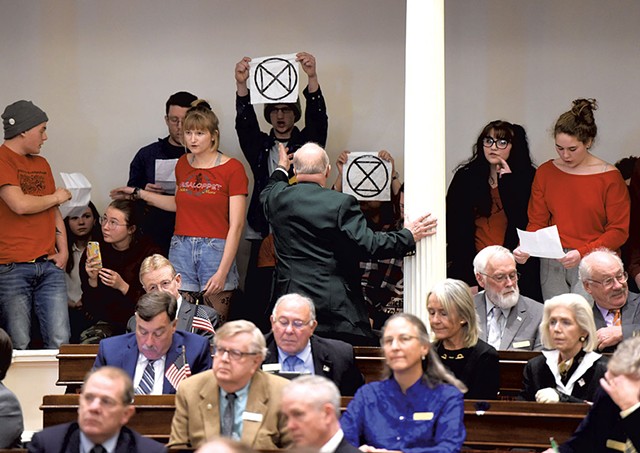 The state's own projections show it is likely to miss the 2025 target. Emissions increased three years in a row before falling 4 percent from 2015 to 2016. Despite that decrease, the state estimates that emissions reductions will, even in a better-case scenario, miss the goal, dropping to just 22 percent by 2026.

"A day late and a dollar short, you might say," quipped Ben Edgerly Walsh, director of the climate and energy program at VPIRG.

Edgerly Walsh argued that the proposals in the governor's budget speech "barely scratch the surface" of what's needed. The state had committed to cutting emissions 25 percent below 1990 levels by 2012. Instead, emissions in 2012 remained stubbornly above 1990 levels.

"Some might be tempted to call these half measures, but I think half measures would actually be a huge step up from what he actually put in his budget address," Edgerly Walsh said.

The governor's plans "don't get us anywhere close" to either the Paris or the 2030 targets, he said.

Peter Walke, deputy secretary of the Agency of Natural Resources, disputed that characterization. The latest projections show the state getting "in the neighborhood" of its Paris commitments, and the additional investments suggested by the governor are likely to accelerate that effort, he said.

"There are reasons we can have hope that we are actually making progress," Walke said

Preliminary figures for 2017 and 2018, some of which are based on hard data such as fuel sales, suggest the downward trends in emissions will continue. But other reasons for optimism are based on assumptions that, for example, lower electric vehicle battery prices, the availability of new EV models, and the expansion of vehicle charging stations will all help shrink emissions.

Critics argue that the administration's assertion that Vermont is back on track to meet its goals is based on little more than a one-year dip in emissions due to a warmer 2016.

"I'm skeptical that you can project this one-year downturn out and assume that, absent any fundamental change in focus ... we will continue to see declines year after year," Copeland Hanzas said.

Walke acknowledged that preliminary estimates for emissions due to heating homes and businesses did bump back up slightly in 2017 and 2018.

But, overall, the numbers are heading in the right direction, he said.

"Those projections are optimistic, but they are realistic based on a number of assumptions," Walke said. "It's not simply based on hope and based on one year of movement."

For example, he said, Vermont has made less progress toward its Paris commitments than any of its neighbors. The state's emissions were 13 percent above 1990 levels in 2016. By contrast, over that same period its neighbors' emissions all declined: New Hampshire's by 3 percent, Québec's by 10 percent, New York's by 13 percent and Massachusetts' by 21 percent.

The main reason for the disparity is that Vermonters are driving more on average than residents of surrounding states, and they're continuing to buy larger, less efficient vehicles such as pickups and SUVs, he said.

Vermont also compares poorly to its neighbors when it comes to carbon emissions per person, Duval said. The average Vermonter's lifestyle produced 15.6 metric tons of greenhouse gases in 2016, lower than the national average of 20.1 but still far higher than surrounding states, he said.

"If we had New Hampshire's per capita emissions, we would already have met the Paris climate commitment," Duval noted.

There's a silver lining, he said: Vermont has done such a good job converting its utility grid to renewable sources such as hydro that any conversion of vehicles and home heating to electricity will mean a greater reduction in carbon emissions than the same switch in states dependent on fossil fuel electric plants.

"When we strategically electrify our transportation and our heating sectors, we get more bang for the buck than anywhere else in the country," Duval said.

Riley Allen, deputy commissioner of the Vermont Department of Public Service, said he understands why the state's history of missed climate targets has left people skeptical about future ones.

But rapid adoption of cold-climate heat pumps, acceptance of electric and hybrid vehicles, and improvements in pellet stoves and advanced wood heating systems all tell him that the targets are, with a lot of hard work, within reach.

"I just believe, with some steady and thoughtful steps to continue along this path, that the 40 percent targets look achievable," he wrote in an email.

Climate activists are not reassured. They have vowed to make Scott's stance on climate action, and legislators' response, a key issue in the 2020 elections.

"The concern about the climate crisis is real, and people are rising up in ways that we have never seen." Johanna Miller tweet this

Lt. Gov. David Zuckerman, a Progressive/Democrat, has made it clear he intends to make Scott's climate record a focus of his own 2020 gubernatorial run, calling Scott's climate proposals "incredibly incremental relative to the scale of the problem."

And VPIRG this month declared it will take a more active role in electoral politics. It announced the creation of an offshoot, VPIRG Votes, to campaign for and donate to politicians who support the state's climate goals — and oppose those who don't. That's unprecedented for VPIRG.

"People out in the streets are bunched up and pissed off," warned Johanna Miller, energy and climate program director at the Vermont Natural Resources Council. "The concern about the climate crisis is real, and people are rising up in ways that we have never seen."

The original print version of this article was headlined "The Hot Seat | Critics are cool to Gov. Phil Scott's climate policies"