I accidentally celebrated National Hot Dog Day in a very appropriate way this year: with a mustard-topped frank at the Vermont Lake Monsters baseball game on July 21.

I usually ignore the "National Whatever Day" food and drink holidays. There are too many to keep up with, and the 21st could have been Mango Day or National Penuche Fudge Day, for all I knew. (Those two celebrations share July 22, it turns out.)

Without realizing the significance of July 21, I took my seat at Centennial Field with a McKenzie Country Classics hot dog in hand. It wasn't even one of the Lake Monsters' "Hot Dog Hysteria" nights, when fans flock to the game for 25-cent franks. But it was still a quintessential summer experience — and we got to see the Lake Monsters win their record-breaking 14th consecutive game with a walk-off grand slam. Hot dog.

The final Hot Dog Hysteria night of the summer is on August 11, but that's not the only game in town. Whether you're aspiring to beat Joey Chestnut's competitive eating record of 76 hot dogs in 10 minutes or you're after a once-a-summer treat, the following two places are frankly great: a new seasonal pop-up and the post-pandemic-shutdown return of an old favorite.

According to frankfurter lore, Charles Feltman invented the first hot dog in 1867 as a handheld food to eat on the beach. Thanks to a pop-up at Hender's Bake Shop & Café in Waterbury, Feltman's of Coney Island dogs are now available in Vermont — and they come loaded with toppings.

Hender's owner Jessica Wright started her Lucky Dogs pop-up the last weekend in May, selling hot dogs and ice cream through a walk-up window on the bakeshop's porch. She came up with the idea over the winter, looking for a safe way to supplement the business amid the uncertainty of the pandemic.

"In this small town, when tourism hits, a lot of the locals avoid restaurants on the weekends because they're packed," Wright said. "I wanted to create a safe, family-friendly, quick and affordable dinner spot for the locals and for people to come and get something different."

Wright chose Feltman's after sampling plain hot dogs from 12 different producers. She loves the smoky flavor and satisfying snap the casing makes when you bite into them. She also likes their unique longer size — they come six per pound instead of the standard eight.

"You get the bun overhang," Wright explained. "When you're loading up a dog with tons of toppings, you need to know that there's a hot dog in there."

Wright's friends helped her brainstorm topping ideas around a social-distance fire pit last winter. She wanted the toppings to be fun and full of local ingredients, without the pressure of recreating the classics.

The pop-up also offers drinks from Vermont Sweetwater Bottling; Field Roast dogs for vegetarians; Hender's Keto-friendly low-carb buns made with almond flour, which are also gluten-free; and ice cream scoops, sandwiches, sundaes and floats made with Island Ice Cream and cookies and brownies from the bakeshop.

Lucky Dogs runs a weekly special contest, encouraging customers to submit ideas and flavor combos. The winning customer names the special and gets a free loaded dog and an ice cream float.

On a sunny, 70-degree Friday evening, I headed up the porch steps with friends and ordered the whole menu. When they were ready, Wright and her team — decked out in aprons, face masks and hats emblazoned with hot dogs — brought the brightly topped dogs out to a table with a checkerboard tablecloth. There was a roll of foil on the table to wrap them to-go, but Wright said most customers aren't going far enough to bother.

"There have been nights where I think everyone just walked here, and we fed all of Winooski Street and the entire town of Waterbury," she added with a laugh.

We came from farther afield, so we carried our loaded dogs down the block to the Dac Rowe Athletic Field. There we found picnic tables under a pavilion and a baseball game to watch.

The next Lucky Dogs pop-up will be August 13 and 14, and it will run every weekend after that through September 3 and 4. "We're going to keep it going while the weather is hot dog eating-friendly," Wright said. 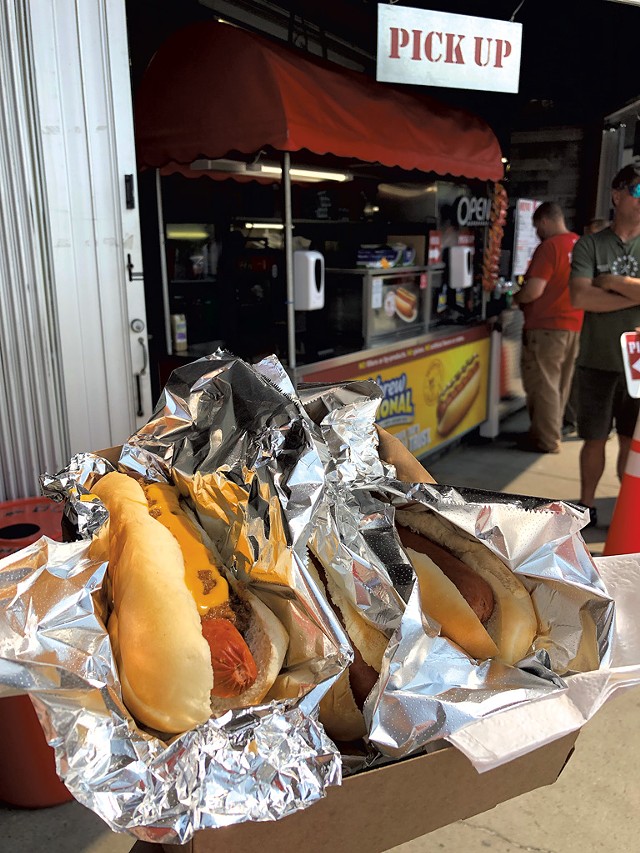 Most people don't plan their hardware store trips around meal times. But, as someone who is easily overwhelmed by the towering aisles of paint, lumber and tools, the promise of a hot dog on the way out the door gets me through.

Not that meal times necessarily matter when it comes to Out Front Foods, the hot dog stand in front of Home Depot in Williston.

"People will get a hot dog when they're not even hungry, because they smell them," said Colby Wilbur, who owns the business with his wife, Margaret.

The stand was closed for nearly 16 months due to the pandemic, but now the scent of hot dogs once again wafts through Home Depot's automatic doors. And on a recent Sunday afternoon, a steady line of customers was either enjoying a late lunch or falling under the spell of the smell — myself included.

The hot dog stand has been operating at the Williston Home Depot for about 23 years, Margaret said. The Wilburs have owned it since June 2018.

"The guy started it with a cart that he brought in every day and took home every night," she explained. The cart was so successful that it eventually became a permanent fixture. "Most Home Depots either have a rental space indoors or a truck that comes and goes. We're somewhat unique, being stationary."

Colby was a representative for Reinhart Food Service when he first started supplying Hebrew National hot dogs to the stand's former owner. "After a while, he came to me and said, 'I'm looking to get out. Do you know somebody that wants to buy the place?'" he explained. "And I just looked at him and said, 'You tell me when.'"

The Wilburs have expanded the menu since they took over, adding topping options, Michigan dogs, poutine, pulled-pork sandwiches and more. But hot dogs are still the top seller.

On March 17, 2020, the Wilburs got an email from Home Depot management telling them to shut down the stand immediately. Though they could have operated under state guidelines — and were well suited to takeout with their walk-up outdoor stand — they weren't allowed to reopen until July 5, 2021.

"Not being allowed to open was very frustrating," Margaret said. "But we also have enjoyed our business so much that it never occurred to us to give up and get other jobs."

Instead, they used the funds from a COVID-19 Economic Injury Disaster Loan to purchase a food truck, which they parked at Berlin City Kia of Vermont last summer — just across Marshall Avenue from the entrance to Home Depot.

"It seemed like a very strange location for people," Margaret said. "But once they realized who we were, it made sense."

This summer, they've been parking the truck at Leddy Beach in Burlington. The weather-dependent site has been challenging during this wet summer, but it's given the couple a chance to meet a different clientele — and expand the menu further to fit their needs. The Out Front Foods truck still sells hot dogs, but it also offers a vegan take on pulled pork and gluten-free rolls that they make themselves.

At Home Depot, the Wilburs are focused on getting food out fast, and they deliver. When I ordered my Sunday afternoon hot dogs ($3.50 each), they were ready so quickly that I thought I might be taking someone else's order.

"It's hot and it's fresh and you're not waiting," Colby said.