The Hop Springs Ahead with Four New Commissions 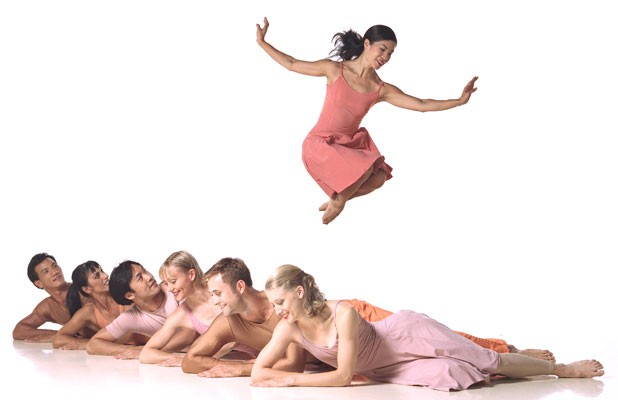 Ever heard of Heiner Goebbels? Quite likely not, though in Europe he’s an eminent composer and director. But if you see his show at Dartmouth’s Hopkins Center in early April, you may end up counting it among the most memorable theater experiences of your life. Goebbels has enlisted the Hilliard Ensemble, a quartet of male singers famous for their close harmonies and performances of early music and modern compositions, for a program of new work based on literary masterpieces by T.S. Eliot, Maurice Blanchot, Franz Kafka and Samuel Beckett. Add to that elaborate staging, subtle sound cues and videography, and you’ve created a multisensory experience that comes close to entrancing the spectator.

Could a performance be more esoteric? (And less mainstream?) Hop programming director Margaret Lawrence agrees that the material is a far cry from Broadway, but she insists that Goebbels’ new work, entitled I went to the house but did not enter, is very accessible. A hit at the Edinburgh International Festival and on other European stages, it will be performed in only one other U.S. venue, at the University of North Carolina at Chapel Hill.

Watching a Goebbels show is “like being in a dream,” Lawrence states. “I am still able to describe entire scenes from a performance I saw in New York three years ago, and I see a lot of theater.”

Goebbels’ experimental work is one of four Hop-commissioned pieces to be performed at Dartmouth College this spring. The Paul Taylor Dance Company is presenting a world premiere of the renowned troupe’s Now Playing, and the Handel Society of Dartmouth College is singing a piece composed by 34-year-old Jonathan Leshnoff that reflects on war and death. Called “Requiem for the Fallen,” it incorporates the Requiem Mass, the Kaddish and two Walt Whitman texts. Finally, DJ Spooky, aka Paul D. Miller, a multimedia artist, musician, composer and writer, will use sound-wave frequencies of ice, old maps and journals to track global warming in his production Terra Nova: Sinfonia Antarctica. DJ Spooky creates a “sonic translation” — with video imagery, audio mix and a live piano trio — to replicate the impact of climate change on that ice-laden continent.

It’s all very well to commission and abet the creation of new works, but how do you persuade audiences to show up for less-familiar acts? Like other performing arts venues these days, the Hop augments its print materials with online clips of rehearsals and previous performances by the artists. Of course, even minimally web-savvy cultural consumers can find auxiliary info on their own, from the pages of Facebook to the mini-movies of YouTube. To nudge potential patrons’ interest, the Hop’s marketing department touts artists’ reputations and pushes “crossover” ticket sales. Goebbels’ work, for example, holds potential appeal for aficionados of music, theater, literature and even visual arts.

Where does the Hop get the funds to present cutting-edge works at a time when most performing arts facilities are struggling to sell tickets at all? Out of thin air, according to Lawrence. The Hopkins Center does not have an endowment for commissioned works, she says; instead, it relies on grants, donations and partner organizations to pull together funding for projects. Lawrence adds that the Hop takes an entrepreneurial approach to financing commissioned works because that’s part of the organization’s mission.

“I think if we only presented work that was super-accessible and didn’t push the envelope, we wouldn’t be doing our job,” Lawrence says. “Our mission is to ignite and sustain a passion for the arts. We see it as a leadership role.”

The programming director believes it behooves similar institutions nationwide that invest in commissions — including the Flynn Center for the Performing Arts in Burlington — to continue to support new work, especially as the economy slides.

That said, Lawrence acknowledges the flurry of new works in the Hop’s spring lineup may be the last hurrah for a while, as she expects funding to be even tighter next year.

This critic’s advice: Enjoy it while you can.

I went to the house but did not enter, directed by Heiner Goebbels, performed by the Hilliard Ensemble. Thursday, April 2 at 7 p.m., and Friday, April 3 at 8 p.m., at the Moore Theater, Hopkins Center, Dartmouth College, Hanover, N.H. $30.

“Requiem for the Fallen” by Jonathan Leshnoff, performed by the Handel Society of Dartmouth College. Saturday, May 16, 8 p.m. at the Spaulding Auditorium, Hopkins Center, Dartmouth College, Hanover, N.H. $20.