The Holy Sprint: A Vermont Church Reads the Bible in 24 Hours 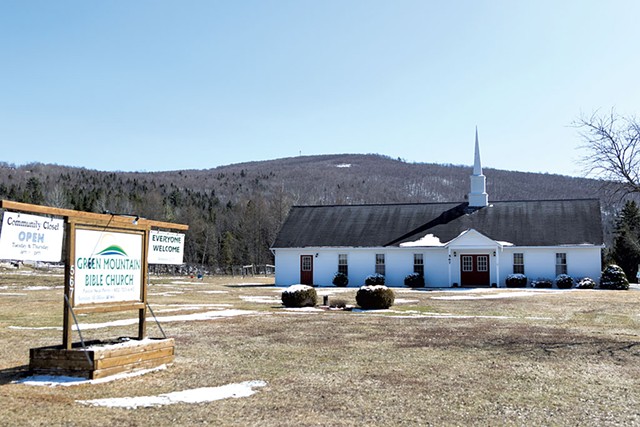 In a hammer-shaped church not far from the waters of Island Pond, a pilgrimage of faith was under way on Saturday. The journey followed a familiar course, from creation to revelation, but promised to conclude in time for Sunday brunch.

At 8 a.m., Pastor Neal Perry stood on the sanctuary stage, opened his Holman Christian Standard Bible to Genesis 12 — God had created the Earth during a Friday night service that included a reading of Genesis 1-11 — and read, "The Lord said to Abram: Go out from your land, your relatives and your father's house to the land that I will show you."

In a nearby dining hall and in a small back room, two of Perry's parishioners read simultaneously from later books of the Bible. By early afternoon, new shifts of readers were on to Exodus, 1 Chronicles and Micah, inching toward their ambitious goal.

On this day before Easter, the Green Mountain Bible Church congregation had set out to read the Protestant Bible aloud from cover to cover, a feat it has completed twice before, but never so quickly. Previous readings began on Good Friday and lasted 72 hours, which is basically how long it takes a person to read aloud all 1,189 chapters and 31,102 verses of the New and Old Testaments. This time, the congregation gave itself just 24 hours, saving the final passages for Sunday's 8 a.m. Easter service.

To meet the deadline, the church held three simultaneous readings in three different rooms. Participants signed up ahead of time and trickled in through the day and night to contribute anywhere from a few minutes to several hours of their time, often reading to empty rooms. During the three hours when a Seven Days reporter attended, maskless readers stumbled over ancient pronunciations, endured dense passages and drank ample coffee — whatever it took to stay on schedule.

The net result was a sort of scriptural speed dating. Turned off by the prescriptive Exodus? (Thou shalt not suffer a sorceress to live.) Bored by the oft-cited Psalms? (Though I walk through the valley of the shadow of death, I will fear no evil.) Rejoice, new adventures awaited down the hall.

Around 1 p.m., the pastor's 9-year-old daughter, Dawn, sounded her way through a chapter in the Book of Micah, her voice rising ever so slightly as she assumed the words of the Lord: "I will destroy your cities. Some people won't obey me. I will show my anger and punish them."

Carolyn and Bryan Miller followed along and waited for their turn, reading glasses slipping down the bridges of their noses. The married couple moved to Island Pond from Oklahoma two Easters ago and found a new family at the Bible Church. "It's beautiful up here," Carolyn, 59, said with a wave of her hand. "I mean, God's beauty." Bryan, 64, nodded his U.S. Army Veteran hat in agreement. 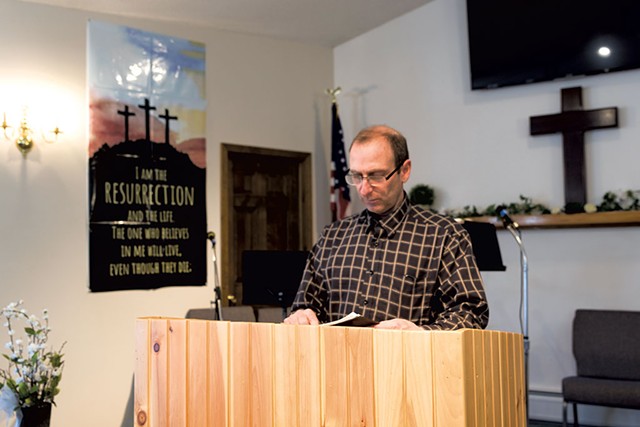 In the nearby dining hall, Kaitlyn Maxwell, 28, and Kim Lambertz, 70, took turns reading from the Book of 1 Chronicles, ignoring the loud buzz of a miniature fridge and the occasional sputter of the coffee machine. Maxwell shifted from foot to foot and spoke in a soft voice, while Lambertz sat nearby and sped through her passages. Together, the women read about King Solomon, the construction of God's temple and all that gold — the gold flowers, lamps, and tongs (all solid gold); the gold wick trimmers, bowls, ladles, and censers — their voices rising to the popcorn ceiling.

Pastor Perry, meanwhile, stood on the sanctuary stage and read from the Book of Leviticus, the wooden pulpit hiding his silver Dickies belt buckle. To his left, a hot tub used for baptisms; five were scheduled for Easter. To his right, the polished surface of a piano gleamed in the soft light of the afternoon sun. Before him: a nearly empty room, to which he intoned in a steady voice how Aaron and his sons slaughtered a calf, then splattered the blood on an altar and burned the organs in a "sin offering" to God.

The message resonated with the only other person in the room: Buba Humphrey, 61, a brick of man who bowed his shaved head to follow along with a Bible in his lap. Asked why he was there, he replied, "I need the Lord in my life, and [for Him] to take care of all our sins that we've done."

For Perry, 53, who became the church's permanent pastor shortly after receiving Liberty University's online undergraduate certificate in Biblical studies six years ago, the reading marathon serves three purposes. First, it encourages other churches to "bring the Bible back to [their] pulpits." He recalled how one service he attended on a recent Sunday morning included just five verses. "I felt like I had gone to a restaurant for a meal and got a couple crackers," he said.

Second, the ritual allows participants from all walks of life to look at the Good Book as, well, just a book. "It's incredible literature, if nothing else," Perry said.

Finally, and perhaps most importantly, it allows the congregation to pay tribute to the Bible's source of inspiration. "We want to say to Him, 'We love this,'" Perry said. "Even the hard parts, the things that are hard to understand, the things that sound awful and gory and everything else. Most authors would leave that out of the book if it was part of their story, but He puts it in, so that kind of verifies it for us: This is a true story."

Perry's story holds its own harsh truths, some of which he shared after slipping on a face mask and welcoming a visiting reporter into his small office, where a messy desk hosted a bottle of hand sanitizer and a wooden replica of Noah's Ark. The only entry on an animal-themed calendar read more like a command than a reminder: April 3, "Bible."

He recalled how youthful considerations of priesthood evaporated after a middle school crush. How he went on to take over his family's third-generation farm in Brownington and then nearly lost it amid the dairy crisis of the 1990s. How stress and shame dragged him so deep into darkness that he believed his only option was suicide. And how, when he opened the Bible to read himself his last rites, he landed on the words he now credits with saving his life.

He put on his wire-rimmed reading glasses and read that passage, Matthew 6:34, in which Jesus assures his followers that all will work out so long as they place their trust in God. "Tomorrow will worry about itself," the chapter ends. "Each day has enough trouble of its own."

Like most spiritual leaders, Perry has no shortage of trouble to busy his mind with these days, from the dividing presence of politics to the pandemic's biblically proportioned upheaval to the everyday anxieties of his 50 or so parishioners. Yet in spite of this — or perhaps because of it — he still took the time to say a prayer over a visiting reporter: "I pray, Lord, that this story is something maybe a little lighter than what he's had to endure in the last year."

Perry then retook his place onstage. When Sunday morning came, he would preside over Easter service, completing his own 24-hour pilgrimage with a description of New Jerusalem, where the trees bear fruit and the river runs clear. Then, the exhausted pastor would sleep.

But for now, he seemed content with where he was: in a nearly empty church beside a parking lot of mud, reading aloud from a book he holds dear.