The Hole Story: The Vagina Monologues speak up for women's rights at four local colleges 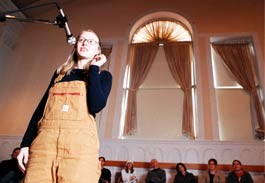 The UVM Women’s Center and ALANA Student Center will present The Vagina Monologues Thursday through Saturday, February 14-16, at 7:30 p.m. in Ira Allen Chapel. Tickets are $8, $5 for seniors and students. Info, 656-4637.

>Middlebury College will present its fourth annual production of The Vagina Monologues on Thursday, February 14, at 7 and 10 p.m. at the McCullough Student Center. Tickets are $5. Tickets and info, 443-7205.

>Information on the Castleton College performance was not available at press time. To check the status, and for complete information on V-Day 2002, check www.vday.org.

When the topic of oral sex came up in conversation, a naïve high school friend of mine once observed: “Oral sex. That’s when you just talk about it, right?” We found her remark hysterically funny at the time, but back then, who knew someone would create a global sensation with a play entirely about women talking about sex? More specifically, about their vaginas?

Since its off-Broadway debut in 1996, The Vagina Monologues has grown into an international movement called V-Day that aims to stop violence against women and girls. Written by Middlebury alum Eve Ensler, Monologues is the movement’s centerpiece, with benefit performances — nearly 250 this year — staged around the globe to raise awareness and money for anti-violence organizations.

Academic presenters have swelled to more than 500 colleges worldwide, including three in Vermont, that will host primarily student run, directed and acted theatrical and artistic events this year. In addition to raising money for organizations in their local communities, most V-Day 2002 events will make donations to the Revolutionary Association of the Women of Afghanistan.

Last year, the University of Vermont’s Women Center launched the school’s premier production of The Vagina Monologues. It was a grassroots, small-budget affair, recalls co-director Anne Marie Lavalette, a UVM junior and former hotline volunteer at the Women’s Rape Crisis Center in Burlington.

“I heard about the play during my freshman year and read it the following summer,” she recalls. “One day I was having a conversation about the play with someone at the Women’s Center, and decided, ‘Wouldn’t it be great to do it here?’”

Pulled together quickly with little advance publicity, the production in a 200-seat campus venue nonetheless created a local frenzy. Two performances quickly sold out. “It was an experiment,” says Lavalette. “We didn’t know how big it would be.”

This year, audition flyers went out early, rehearsal time nearly doubled, and The Vagina Monologues will be held over three nights, February 14 through 16, at the roomier Ira Allen Chapel. Doors will open an hour before curtain for a “Vagina Carnival,” featuring V-Day merch such as travel mugs, tank tops and, incredibly, chocolate vagina lollipops and baked goods — provided someone can find a vagina cookie cutter.

Lavalette, who is taking a year off from college to volunteer at the Committee on Temporary Shelter, is again co-directing the play. “It’s a big time commitment, but I feel an obligation to make a difference,” she says. “Most of the heroes in our culture are men, which means we’re overlooking half the world’s population. I think it’s important for women’s stories to be told, and to challenge people’s stereotypes. But mainly, I want the audience to have a good time.”

Based on Ensler’s interviews with hundreds of women, The Vagina Monologues shares the insights of women of different ages, backgrounds and experiences — from a Bosnian rape victim and an 80-year-old woman who has never sneaked a peek “down there,” to a teen-ager who can’t stop touching herself. The play tackles taboo subjects with a mix of drama and humor, but there’s no beating around the bush. V-Day aims to stop female genital mutilation, rape, incest and domestic violence, and through The Vagina Monologues exposes the horrors of many of these crimes.

Despite the play’s graphic content, which includes a list of vagina euphemisms, Lavalette may bring her grandmother to the show again this year, and several of the actors plan on inviting senior friends. Their motto seems to be, “If you have a vagina, you shall come.”

And while a male counterpart to the play — which a friend suggested might be dubbed The Dick Soliloquies — has yet to surface, men need not consider themselves outsiders. For the most part, The Vagina Monologues doesn’t rag on men, and any man who wants the inside scoop on his wife’s or girlfriend’s sexual nerve center would do well to attend.

V-Day is so inclusive, in fact, that its national office recently embraced the mission of the Intersex Society of America to raise awareness of Mayer-Rokitansky-Kuster-Hauser Syndrome, a condition in which the vagina is missing or not fully developed, and the subject of one of the play’s funnier and more poignant monologues.

“The V-Day initiative for me is the most organized, compassionate, inclusive organization to heighten awareness around gender violence, a topic that is so common yet so shrouded in secrecy and silence,” says co-director Dawn Johnson, a UVM political science major who also is acting in the show.

Much like departing the birth canal, “You don’t leave The Vagina Monologues the same way you enter them,” Johnson attests. “Whether you realize it or not, you are changed for the better.”

We’ve come a long way, mostly in the wrong direction, since ancient people smeared cave openings with ochre to pay homage to the female womb — the entry point of human life. As Pat Fontaine, an adjunct professor of Women’s Studies at UVM, sees it, The Vagina Monologues helps to restore reverence for women’s nether regions.

“I thought I knew from vaginas,” says Fontaine, “but at last year’s first rehearsal, I got a funny feeling in my solar plexus. Women talking about the beauty, intensity, sadness and gorgeousness emanating from their bodies touched me in a way I had no way of predicting.”

Fontaine, who peppers her e-mails to fellow cast members with the “c word,” says that during the course of the play, “the word vagina, which is so charged, becomes less of a shock word and more of a shared cultural experience.”

Fontaine says she felt bereft after the show closed last year and consequently is back this year in another role. “One of the best parts is watching the reactions in the audience,” she says. “The play hits people at a visceral level. Their faces flush, they lean forward in their seats, and the temperature in the room goes up about 10 degrees. I’ve never seen another play where the boundaries between the audience and the actors nearly disappear.”

For Fritzie Charne of Queens, New York, getting involved in The Vagina Monologues was a personal challenge and an opportunity to become part of a supportive community of women. Weighing in at more than 200 pounds last June, Charne made a decision to lose weight. By the time she moved to Burlington in August, she was well on her way down the scale. Now nearly 60 pounds lighter, she’s gone from a size 18 to a size 10.

“But I was uncomfortable in my new body,” Charne recalls. “I wasn’t prepared to deal with how men looked at me.” She had gone from shopping for plus sizes at Lane Bryant to the junior racks in Express, but harbored an uneasy feeling that people felt she “didn’t deserve to be there.” Enrolled in a graduate program in student affairs, she made a few friends. But a feeling of connection with kindred spirits eluded her.

When she saw an audition flyer for UVM’s production of The Vagina Monologues, she decided to give it a try. “I thought being in this play with other women might help me to feel more comfortable, and it has,” says Charne. “We all have our own reasons for being involved, and we’re all supportive of each other.”

Shopping for the little black dress to wear for the performance was another morale-builder. “I haven’t worn a dress since 1999,” she says, “and it looks good!”

“As a woman, I couldn’t not be part of this play,” explains Sarah Kenney, development director at the Women’s Rape Crisis Center. “In my job I see the best and worst in people. I see the depths of evil, but I also meet women and men who have overcome incredible obstacles.”

Kenney vows that the play can’t help but draw audiences in. “You see what incredible healing women’s bodies are capable of, and you realize that telling these stories is part of the healing process,” she suggests.

At a recent rehearsal, the women who will give voice and life to The Vagina Monologues sat in a semi-circle on the Ira Allen Chapel stage. Stepping up to the microphone alone, or in twos and threes, their performances were poised and polished. It seemed impossible that only a few have acted before, other than dabbling in high school plays. But in The Vagina Monologues, acting is secondary to delivering the message, that is, “Until the violence stops.”