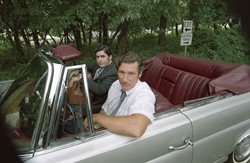 The literary con tends to be viewed as a postmodern phenomenon. Jayson Blair, Stephen Glass, James Frey and other fabricators may look like the products of an ethically lazy, celebrity-obsessed age. But the fact is, writers have been propagating whoppers in this country for as long as it's existed. A recent issue of The New Yorker reminded readers that historians have long regarded claims made by Jamestown founder Captain John Smith in his various memoirs as little more than elaborately boastful fibs. And, as director Lasse Hallström reminds us in his new film, the biggest literary con in history took place nearly four decades ago.

The Hoax is the story of master scam-artist Clifford Irving. How smooth an operator is this guy? He didn't just write the bogus Howard Hughes memoir that is the subject of this film; he also penned the post-prison account on which its screenplay is based. Richard Gere, giving one of the liveliest performances of his career, plays him as equal parts social climber and sociopath.

From the movie's earliest moments, Irving's desperation is palpable. He is a writer who's always had a higher opinion of his writing than do the publishing executives who control his fate. A book about a forger of great paintings didn't sell well. A new work of fiction, Rudnick's Problem, is about to be picked up by McGraw-Hill when editors recognize it as a rip-off of Portnoy's Complaint. Irving has reached middle age without attaining any of his dreams; repo men are lugging pricey pieces of furniture from his house when something inside him snaps.

So Irving bursts unannounced into a meeting his editor (Hope Davis) is taking and blurts an empty claim. He's about to write the most important book of the 20th century - and, sport that he is, he's willing to give McGraw-Hill first dibs on it. In a few days. Once he's figured out what it's going to be about.

Alfred Molina costars as Dick Suskind, Irving's researcher, co-writer and all-around sidekick. He's an affable teddy bear, eager to please his more dapper, big-dreaming pal, and he can't sign on fast enough when Irving stumbles on the notion of an "authorized" Hughes bio. The pair gambles everything on their belief that the billionaire recluse won't come out of hiding to call their bluff. They set about the business of learning to mimic his handwriting and idiosyncratic syntax. Blinded by greed, company brass bite. The next thing we know, Gere's calling the shots and driving away in his Mercedes with checks in excess of $1 million.

The Hoax works best when it confines its focus to the battle of wits - and nerves - Irving wages with the writers of those checks. As time goes by, and the publishers begin to receive calls from the Hughes camp denying any knowledge of the project, Irving is forced to improvise an ever more elaborate web of lies. Gere does a splendid job of suggesting the mounting panic behind the huckster's grin.

Hallström and screenwriter William Wheeler fare less well when they stray into more fanciful territory. A storyline that attempts to link Irving's antics to the Watergate break-in comes off as borderline nutso. Similarly distracting and unnecessary are a series of late-inning scenes in which an on-the-edge Irving hallucinates visits from Hughes goons, à la John Nash in A Beautiful Mind.

Fortunately, the makers of the film don't waste a lot of screen time on these digressions. For the most part, The Hoax is full-speed-ahead fun, a rollicking caper that recalls a quainter, pre-Ken Lay age when big-time fraud could entail actually writing books, as opposed to just cooking them.