Movie Review: The High Jinks of Cooped-Up Critters Lose Their Appeal in 'The Secret Life of Pets 2' 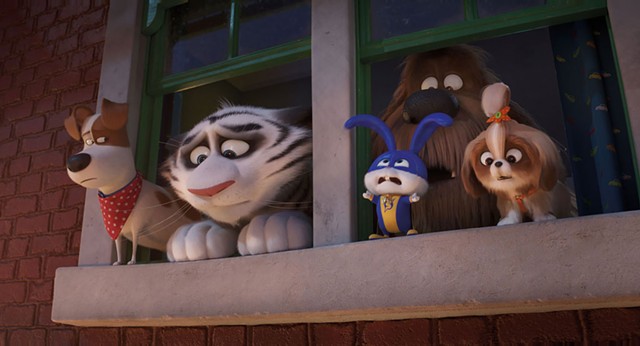 Sequels customarily offer more of the same. The Secret Life of Pets 2 breaks with that tradition. It offers less. Less Albert Brooks and Steve Coogan (exactly zilch). Way less Louis C.K. Less off-the-wall cockeyed brilliance — of the original's three writers, only Brian Lynch reported for follow-up duty. Even less running time. The 2016 film was 87 minutes long. This one's shorter by a minute. On that count, I'm not complaining.

Perhaps the most problematic paucity is that of narrative cohesion. Directed by Chris Renaud, who helmed No. 1 with help from Yarrow Cheney, the new installment is less a feature than a bundle of shorts lashed together with a dearth of finesse.

One of the three sections follows everyterrier Max (Patton Oswalt) and supersize sidekick Duke (Eric Stonestreet) as they grapple with changes on the home front. Their owner, Katie (Ellie Kemper), has met someone, married and had a baby.

The first half of this thread essentially recycles the dynamic between the two lead pups in the earlier picture. Initially, they freak out on the arrival of a rival for Katie's attention, but bonding promptly ensues. This time around, Max resents the newborn, then inexplicably becomes protective to the point of neurosis. The second half concerns a stay at a relative's farm and revolves around gags about animals and noises that likewise freak out Max. A high point involves bovine flatulence.

Then there's a saga featuring Snowball, the motormouth bunny voiced by Kevin Hart. Between movies, he's inexplicably morphed from a supervillain into one of the law-abiding animals, one with delusions of being a superhero. His superpower, unfortunately, isn't being funny. It's basically shrieking and screeching at every opportunity.

In a reunion that has gone pretty much unheralded, unpromoted and, for that matter, unnoticed, Hart is paired with Night School costar Tiffany Haddish, here voicing a new dog who enlists Snowball's assistance in rescuing an abused tiger cub from the clutches of an evil circus owner. We know the guy is evil because he carries a whip, has a Russian accent and dresses like the Wicked Witch in The Wizard of Oz. Let's just say this isn't the strongest of the movie's story lines.

But it feels like a Citizen Kane-2001: A Space Odyssey double bill beside the third, a throwaway digression in which Gidget (Jenny Slate) loses the prized toy that Max entrusted to her while he's away. It's a bouncy thing she allows to bounce into the apartment of an elderly lady who lives with a battalion of ill-tempered cats. Gidget must seek the counsel of know-it-all Chloe (Lake Bell), who teaches her how to pass for a canine so she can penetrate enemy lines and retrieve the plaything. A high point involves the litter box.

Well, it didn't take long for this franchise to go to the dogs (obligatory critic pun). The first film had the largest opening weekend ever at the time for an original film. More significantly, it was an original film. The writing, artwork and performances were outrageously, delightfully bonkers. The animals truly were wild. It was borderline Dada.

With the possible exception of The Godfather Part III, I can't think of a revered property that plummeted in quality as steeply from one chapter to the next. This is a slapdash mishmash of the tossed-off, formulaic and trite. Illumination should have done everyone a favor and kept it a secret.